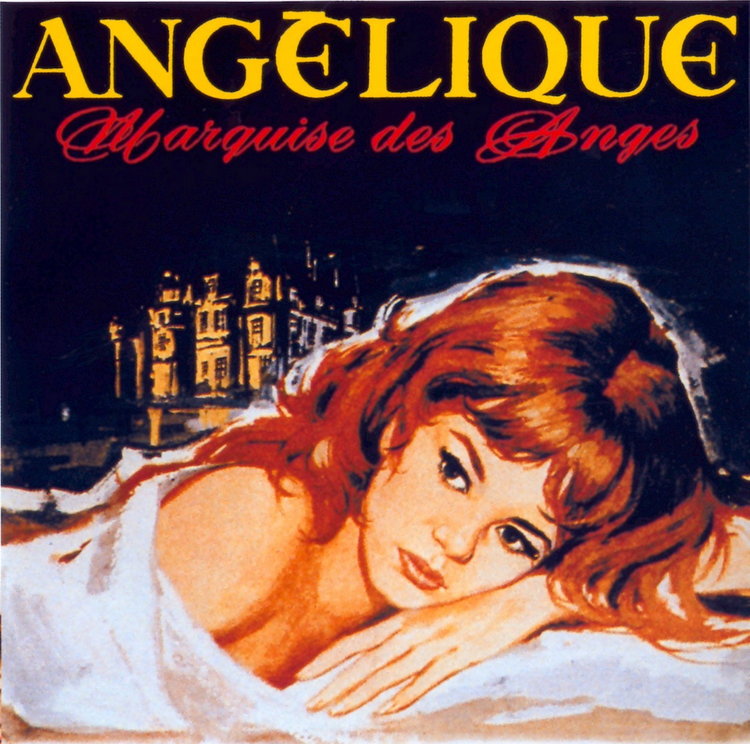 For any avid reader, visiting a city or a country through a book is sometimes the best way to travel. From the comfort of your favorite chair, you can walk the streets your favorite characters walked, dwell in the same places they’ve been, get to know the people, cultures…

Historical romances are even more fun, because you get to do all that – in the past. And when you stumble upon a good, accurate historical novel – ah! Perfect!

One of those novels is Angelique by novelist duo Anne and Serge Golon. It is a series of 13 big, fat and juicy French historical adventure books that take place during the reign of Louis XIV. The books, were written in a course of 20+ years, follow the life and adventures of Angelique, a heroine born into the provincial aristocracy in the Western France, who marries at a young age to the romantic, dashing Count of Toulouse.

Her domestic bliss gets destroyed when King Louis XIV executes her husband. She descends into the Paris underworld and from there gradually advances to the ranks of a businesswoman – by selling exotic chocolate.  She marries for the second time to a courtier and there, being beautiful and full of life, she catches the eye of the king.

When her second husband dies in a war, she learns that the first was not dead and embarks on a journey to find him in the Mediterranean. There she has adventures of all sorts, runs into pirates, gets sold into slavery in Crete, gets taken into the harem in Morocco and finally escapes back to France without finding her husband.

There, she joins the province rebellion and finds refuge with a Huguenot family. Threatened by the revocation of the Edict of Nantes, they decide to run and at that time her long lost first husband appears and takes them all to America in his ship.

In the French Acadia, among the French and English settlers, Indians and pirates, Angelique has more adventures, breaks more hearts and finds her happiness.

This summary makes Angelique look like some cheesy bodice ripper which in a way it is, but it is also much more than that. It is a very, very good historical novel with a number of details woven into the story.

Through Angelique, reader gets transported back in time to her impoverished home in Western France, where we learn how the poor, provincial aristocracy lived – in cold homes, hungry and dirty and desperate like their wards.

From there, our heroine – smart and headstrong and beautiful – goes to the Court of Love and the wealthy Toulouse full of educated people, travelers, troubadours, scientists, adventurers, exotic travelers.

Then we go to Paris, at first as a rich, arrogant aristocrats and then slum into the underground, surrounded by thieves, murderers, prostitutes, beggars. We get to know the shady parts of the Underworld Paris, the Seine river banks, the filthy cobbled streets of Paris and ins and taverns where these people gathered, the prisons – Grand Chatelet for the poor and Bastille for the rich,  and taverns and policemen and poets and vagabonds.

A whole different Paris appears before our eyes –   an underground labyrinth, Court of miracles that spread across the Filles-Dieu convent, Rue du Temple, the Court of Jussienne, Reuilly Street, Rue St. Jean and Tournelles Beausire, Rue de l’Echelle and between the Rue du Caire and Rue Reaumur.

From there, we move into the world of innkeepers and traders and small businessmen that lived and worked around the Court of miracles, one foot in and one foot out of the gutter and then slowly, circling the squares and parks and wealthy palaces, including the Grand Palais (King’s city palace), we get to Louvre Palace and latter to Versailles where we meet kings and queens and courtiers and dwarves and  artists and princesses and dukes and king’s lovers and associates and enemies. We learn how and where they ate, slept, walked, hear the secrets whispered in the dark corridors, feel the life in a war campaign, learn how the hunts looked like, where they lives, how they live and decorated and run their homes and palaces, how it was to buzz constantly around the King. It is there we run into Moliere, La Voisin, sultan’s envoys and a Cossack prince…

Then there is the mysterious Levant with pirates and adventurers and sultans and slave traders and then back to Poitiers, living the life of a rebel, hiding from king’s men in caves and forests and abbeys, before we go to La Rochelle and learn how the Huguenots lived there.

Do you want to know more about 17th century Quebec? Angelique is the book for you. More fun than history lessons and texts. It offers enough historical details for you to paint a pretty good and accurate picture in your mind of the vast spaces, cold winters, the rise of the cities in French colonies, the stories, legends that swirled around them.

The entire series was “in” during the 1960s and 1970s and can from time to time feel outdated or even politically incorrect. The books are a bit too long and the pace is uneven and sometimes you just want to scream in frustration because of the lack of editing that would size certain sections up to a sentence or a paragraph and not the entire chapter, but nevertheless they are a fun read. Thanks to so many details and little bits of stories and descriptions, you can almost experience living in that time and in those places.

Don’t get repelled by the kitsch, 1970s style romance novels covers nor the size of the novels. They are better than they look – a fun and entertaining history lesson on 17th century France.