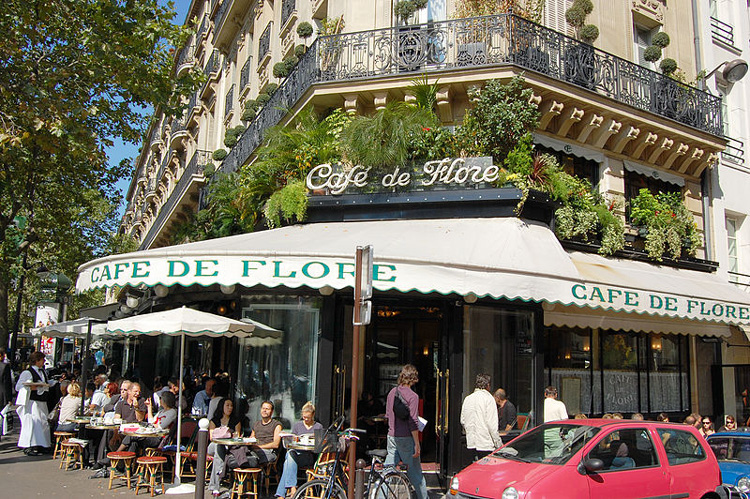 When in Paris, find the time to visit one of the oldest coffeehouses in the city, the favorite meeting place of artists, writers, and philosophers – the Café de Flore. Located in Saint-Germain-des-Pres in the 6th arrondissement, the coffeehouse is still a popular spot among celebrities, so do not be surprised if you catch a glimpse of  Johnny Depp or Robert de Niro or Jack Nicolson eating lunch or drinking coffee.

The café was opened during the Third Republic, in the 1880s. It got its name from a sculpture of Flora, the Roman goddess of flowers and springtime that was located on the opposite side of the Boulevard Saint Germain.

From the start, the café was frequented by writers such as Joris-Karl Huysmans and Remy de Gourmont. In the late 19th century, Charles Maurras wrote his book Au signe de Flore on the first floor of the café. It was also on this floor that the Revue d’Action Francaise was born in 1899. Around 1913, Guillaume Apollinaire who lived on Boulevard Saint-Germain transformed the ground floor of the café into a newsroom with his friend, poet Andre Salmon and the two created the magazine Les Soirées de Paris there.

Apollinaire used the café as his office and would meet people there. One day in 1917, Apollinaire was sitting on the terrace of the Café de Flore with Andre Breton and Louis Aragon and the three coined the word “surrealist” there. The café was also the birthplace of the Dada movement.

In the 1930s, the who-is-who of the Paris literature scene rushed to Café de Flora, from writers Leon-Paul Fargue, Raymond Queneau, Michel Leiris, Georges Bataille and Robert Desnos to various publishers and editors who were looking for a new client.

The painter Yves Tangut brought to the café Leo Mallet who, after World War II, wrote La Nuit de Saint-Germain-des-Pres. The café was also popular among the Montparnasse “elders”, from Andre Derain and the Giacommeti brothers to Ossip Zadkine and Pablo Picasso.

Actors and directors also frequented the café at that time, enjoying its particular atmosphere and the classic Art Deco interior with red seating, mahogany, and mirrors. Marcel Carne would meet with the actor Serge Reggiani there and Jean-Louis Barrault would often arrive with his theater troupe after performances.

Poet Jacques Prevert along with Raymond Bussieres, Marcel Duhamel, Paul Grimault, Sylvia Bataille and other members of the avant-garde theatre company, the October group frequented the cafe. They were called the Prevert band and were for years regular guests of the café.

During World War Two, Café de Flore was a German-free zone. Writers and actors and intellectuals eagerly went there, while Simone de Beauvoir and Jean-Paul Sartre practically lived in the Flore.  “We settled down there completely: from nine in the morning until noon, we worked there, we went for lunch and came back at two o’clock and then we talked with friends we made until eight o’clock. After dinner, we met the people we had an appointment with. This may sound strange to you, but we were at home in the Flore,” Sartre would later write.

At the time of Nazi occupation and the war, the café was the meeting place of the Prevert band, Albert Camus and the Sartre family as well as the so-called “communist group” led by Marguerite Duras, Dionys Mascolo, Roger Vailland.

During the 1950s and 1960s, the café was popular among homosexuals, as well as actors, singers, and intellectuals. While staying in Paris Ernest Hemingway,  Truman Capote, Lawrence Durell were regular customers. Boris Vian wrote Manual of Saint-Germain-des-Pres there, playing trumpet in the basement and writing poems. The golden couple of that time Simone Signoret and Yves Montand were also regulars, preferring the terrace to the interior. Cristian Vadim, Jane Fonda, Jane Seberg, Romain Polanski all loved to gather in the café, while Brigitte Bardo, Alain Delon, and Jean-Paul Belmondo preferred the terrace. The café was also the hub for fashion creators – Yves Saint Laurent, Rochas, Givenchy, Lagerfeld, Paco Rabanne who would go there for a coffee or lunch in the company of the most beautiful, most famous supermodels of the time.

At one point, Café de Flore was also a popular meeting place of Romanian thinkers such as Emil Cioran, Eugene Ionesco, and essayist Benjamin Fondane.

During the 1980s and 1990s, you could spot Serge Gainsbourg drinking a double pastis 51, Francis Bacon would sit in the café all day watching the guests and passersby.  Juliette Greco preferred the second floor while Catherine Deneuve liked the first floor better. Bernard-Henry Levy, Sonia Rykiel, and others would often have lunch there.

In 1994, writer Frederic Beigbeder founded a literary prize the Prix de Flore, awarded annually at the Café de Flore to young talents. The laureate receives 6,150 euros and a Pouilly-fumé wine he/she can drink every day for one year.

Café de Flore has a special place in popular culture as well. It was the subject of a film about Sartre and Simone de Beauvoir Les Amants du Flore and it appeared in the 1963 film The Fire Within. It was mentioned in the song Et mon pere by Nicolas Peyrac and L’Entarte by Renaud. Amanda Lear filmed her music video Egal in the café in 1981 and it features in the series Absolutely Fabulous.

So, find the time and visit the place. When in café the rules are simple –  order a coffee pot instead of coffee, Laducette house wine instead of a glass of wine. If you’re in the mood for French fries, order a pack of crisps, sit back, relax and enjoy the sounds and the atmosphere of one of the world’s most famous coffeehouses.