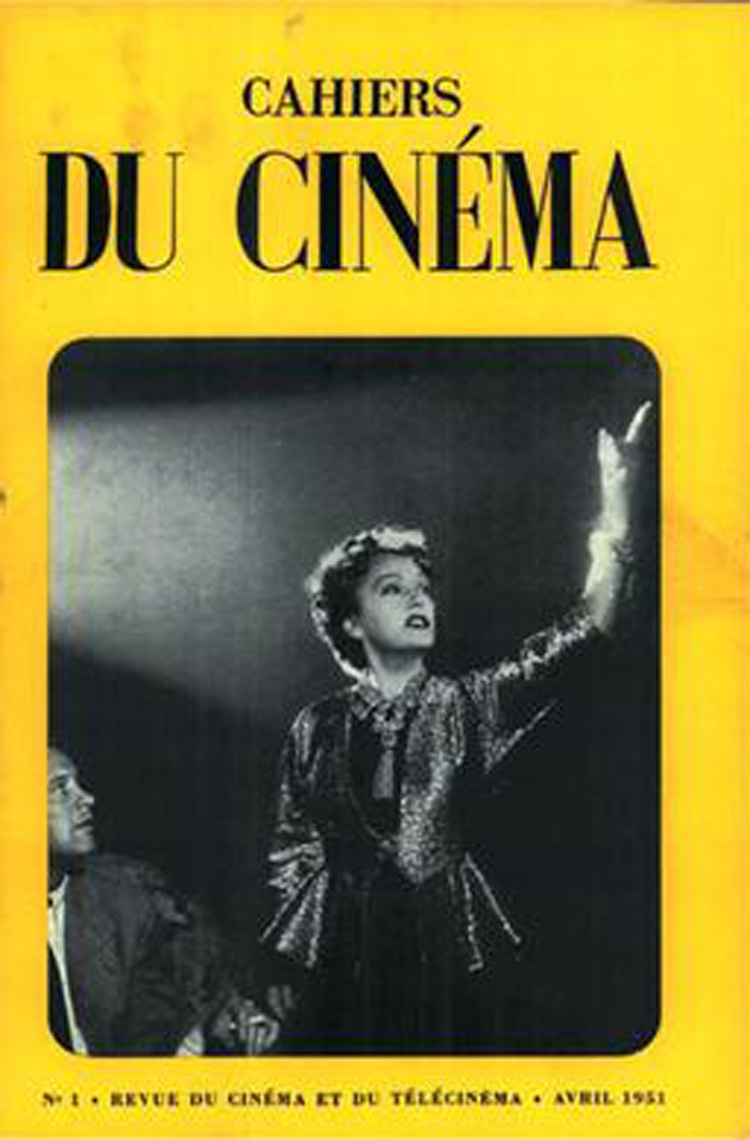 Cahiers du Cinema (Notebooks on Cinema) is a French film magazine founded in 1951 by Andre Bazin, Jacques Doniol-Valcroze and Joseph-Marie Lo Duca. During the 1950s and 1960s, it was the hub of new, young filmmakers such as  Jean-Luc Godard, Claude Chabrol and Francois Truffaut who all wrote for the this oldest French-language film magazine in publication.

Early issues of the magazine were small, 30-pages journals. The cover was minimalist – film stills on a bright yellow background. In the beginning, each issue had only four or five articles, mostly reviews of specific films or directors and an occasional longer theoretical essay.

Bazin, who headed the editorial board, was the dominant figure in the first few years of magazine’s publication and he wrote at least one piece in most issues while he was alive.  He wanted Cahiers to continue the intellectual criticism of the Revue and in his articles, he was advocating for realism as the most valuable cinema quality.

However, as time went by, Young Turks – a group of young proteges and editors underneath him, began disagreeing with him. Young Turks started moving away from the canonized French and Italian filmmakers Bazin favored and started appreciating more commercial American filmmakers such as Alfred Hitchcock, Orson Welles, John Ford or Howard Hawks.

That group of film critics rejected the “tradition de qualite” of mainstream French cinema which favored craft and works of the past over innovation and experimentation.

The break was complete in 1954 (even though Godard voiced his disagreement with Bazin in 1952 over editing of an article for one issue of Cahiers) when Francois Truffaut wrote an essay Une certaine tendance du cinéma français, denouncing what he and his fellow colleagues saw as safe and unimaginative films of established authors. He and his colleagues from the Cahiers believed that the director is the “author” of the film and that his signature is visible from film to film.

With the essay, Truffaut heralded the new movement of the French film – New Wave, one of the most influential movements in cinema history. Some of its most prominent pioneers among the group, including  Truffaut, Godard, Eric Rohmer, Chabrol, and Jacques Rivette, began as critics for the Cahiers du cinema and all were influenced by Bazin despite their disagreements with his view.

After the essay was published, Doniol Valcroze and most of the Cahiers editors backed the Young Turks. Lo Duca did not and left the magazine a year later. Banzin gave editorial control to Rohmer and left Paris although he continued to write for the magazine.

Cahiers du cinema were now under the control of the Young Turks (except Godard who left Paris in 1952) who changed the format of the magazine, adding interviews with directors they saw as “auteurs” and voting on films in a “council” of ten core critics – something that the magazine still does through its annual list of top 10 films.

Along with American directors, Young Turks championed non-American authors too such as Jean Renoir, Roberto Rossellini, Kenji Mizoguchi, Jan Cocteau – many of which Bazin introduced them to.

By the end of the 1950s, many of the Young Turks editors wanted to implement in practice what they were writing about. Godard returned to Paris in 1956 with one short film under his belt, inspiring them to start dividing time between writing about films and making them.

Those films would later become the basis for French New wave with fragmented editing, long takes, a combination of realism and author’s touch and narrative ambiguity.  Chabrol’s Le Beau Serge (1958) is traditionally credited as the first New Wave feature. Truffaut, with The 400 Blows (1959) and Godard, with Breathless (1960) had unexpected international successes that turned the world’s attention to the New Wave and enabled the movement to grow.

With so many editors making films, Rohmer hired new editors and gave more work to other existing ones, particularly Jacques Rivette. As many new critics, except Rivette, largely ignored the New Wave this created friction between the Young Turks and Rohmer.

A group of five Cahiers editors, including Godard, Doniol Valcroze and Rivette urged Rohmer to include newer films in the magazine which he refused. The group then forced him out and installed Rivette as his replacement.

Rivette, in turn, shifted the focus farther to the left and started a trend of paying more attention to non-Hollywood movies. With the political and social changes of the 1960s and 1970s, Cahiers moved to radicalism and at one point during the mid-1970s, the magazine was run by Maoist editors.

However, a review of Steven Spielberg’s Jaws (1975) marked the return to more commercial films and a change in the editorial board.

In 1998 the company that published Cahiers – the Editions de l’Etoile was bought by Le Monde press group. In the attempt to gain new readers, the magazine tried a make-over by running opinion pieces on reality TV, video games and all visual arts in a post-modernist approach, confusing the readers and alienating part of the writers. The magazine was once again sold, this time in 2009, to Richard Schlagman, owner of the Phaidon Press who continues to publish it.