“Any country with 300 cheeses cannot die,” Winston Churchill said during the German occupation of France.

It is safe to say that France will never die as nowadays it has more than 1000 cheeses, thanks to a large number of new products, inventions and copies. With 96% of French people regularly eating cheese and an average annual consumption of more than 20kg per capita, it can be said that cheese is the favorite food or snack in France.

Statistics also say that some 47% of French people eat cheese on a daily basis. The heavy consumers (1 out of 4) eat cheese all day long; some 42% eat it once or twice a day, while 31% of French eat cheese less than once a day.  Heavy consumers tend to be older men while women and young people who see it as a fatty food full of calories and cholesterol are in the light category of cheese aficionados.

Cheese production is believed to be discovered through the storage and shipping of milk in ruminant’s stomach and during the Neolithic period the cheese manufacturing process expanded. Thanks to the rennets which occur in the animal stomach, milk turns into crud and then into the whey. Once drained and dried, it becomes a nourishing and easy food to transport.

At one point, cheese was so precious it was used as a currency, an exchange value in different deals. Some say cheese was the reason for the domestication of sheep, goat and later cattle.

There are many ways to divide French cheeses and we’ll present the most basic categorizations.

French cheeses can be divided into three main families: Pressed cheeses come in large units out of which the cheese is cut in slices. The cheese can be “cooked”, meaning heated during the production process or “uncooked”. Among the most popular pressed cheeses are Cantal, Comte, Emmental, Mimolette.

Soft cheeses which are manufactured in small units so if you buy one you must buy a whole cheese which is not that bad because Brie, Camembert, Mont d’Or are mouth watering delicious! 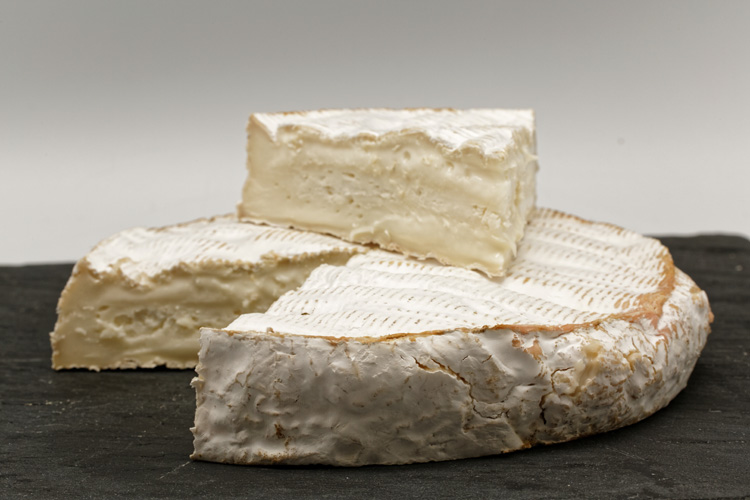 The most famous blue cheese is, of course, Roquefort, but you should also try Bleu de Causses, Bleu de Gex, Fourme d’Ambert and Bleu de Bresse which does not have an AOC label but it is nevertheless tasty.

Cheese is traditionally made from three types of mill – cow’s, goat’s and sheep’s milk, but there is also cheese made out of ewe’s milk. The ewe family is similar to the goat family where the animals produce richer milk but in smaller quantity. These cheeses are pretty strong and characteristic.

Cheese can also be divided into cheeses made from the farmhouse, the so-called fromages fermiers and industrially made cheeses.

They can further be divided into traditional regional cheeses with AOC (appellation d’origine protegee) label, traditional cheese without an AOP label and modern dairy-designed and produced cheeses.

Among the modern dairy cheeses, Boursin (cream cheese with herbs and garlic), Brillat-Savarin and Raclette are among the most popular and delicious. If you get the chance, try one unusual cheese – Cancoillottee, a runny cheese strongly flavored with garlic.

Cheese goes well with wine, another French favorite so when in France, make sure to try as many combinations as you like. Even though in the end your personal taste will be the best expert, there are some simple rules – sweet white wines do not go well with cheese, red wines go best with most cheeses as well as dry white wines which are especially good with mild cheeses.