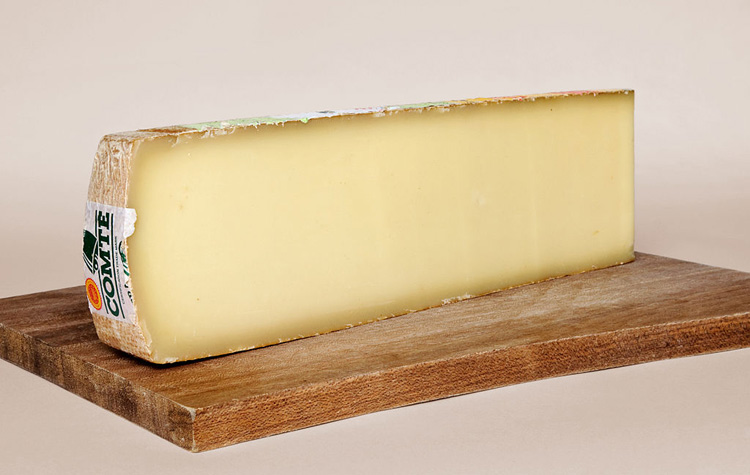 Comte is a cow’s milk cheese made in the mountains of eastern France. It has the highest production of all French cheeses with the appellation d’origine controlee (AOC) status and annually some 64,000 tonnes of cheese is produced. This is quite an accomplishment given the fact that some 600 liters of milk – the daily production of more than 30 cows – is needed to make a single disc of cheese weighing up to 50 kilos.

Comte is produced in the Jura Massif region of eastern France, a territory with a particular alpine and sub-alpine climate of cold winters, warm summers, spruce forests and underground water sources perfect for raising dairy cows and making cheese.

Only the unpasteurized milk from Montbeliarde or French Simmental cows (or combination of both) can be used. These cows produce milk with both high-quality fat and protein – critical for making a great Comte.

The AOC regulations prescribe strict rules for both the dairy farmers who make the cheese and the people who age the cheese, as these two groups have been making Comte cheese since the 13th century when monks first cleared the forests for agriculture and started livestock farming.

The raw milk for the cheese can only come fresh from within a few kilometers of the cheesemaker, which means that each round of cheese has a very distinct flavors and aromas and that no two cheeses are the same, as AOC regulations state that there must be no more than 1.3 cows per hectare of the pasture who may only be fed fresh feed with no silage.

Since the milk must be used immediately, cheeses also have a so-called seasonal stamp which means you can come across summer Comte which has a golden hue and richer, earthier flavor. Winter Comte is milky-colored and delicate. You can also find Comte from the mountains and Comte from the plains, young and old Comte and each will be different with a different texture, aroma, color and flavor. 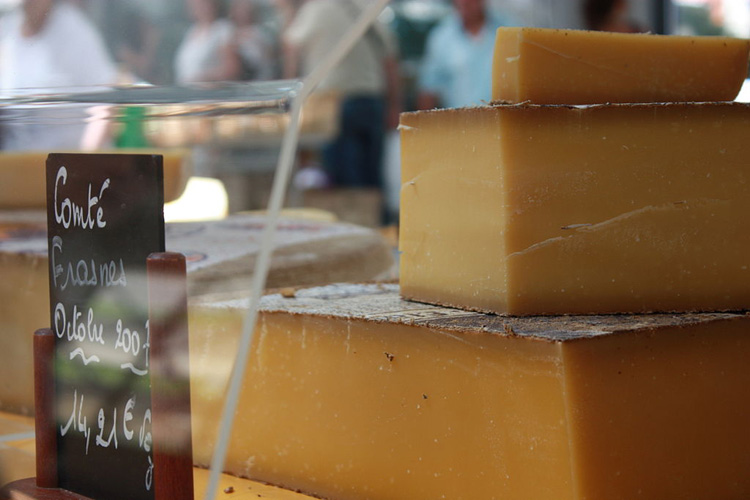 The raw milk is poured into large copper vats and warmed up to 56 degrees Celsius. Rennet is added causing the milk to coagulate. The curds are then cut into white grains the size of rice and stirred before being heated again for around half an hour. The contents are then placed into moulds and the whey is pressed out.

After several hours the mould is opened and coarse salt sea from Guerande along with a yeast solution is brushed onto the rind.  The holes that can appear in the Comte are the result of a long maturing period called affinage.

The cheese is then left to mature in cellars at the dairy and then at maturing cellars in the region where the cheese must ripen for a minimum of four months to between 18 and 24 months and up to 48 months.

The cheese is aging in the cool, dark and humid caves of the Alps, absorbing the moisture from the cracks in the walls and thus achieving its unique taste, aroma, texture and color. The more the cheese age the flavors intensify and the texture becomes more firm.

Comte is considered one of the finest cheeses in the world with its pale yellow interior and a texture that can vary from silky to crystalline. 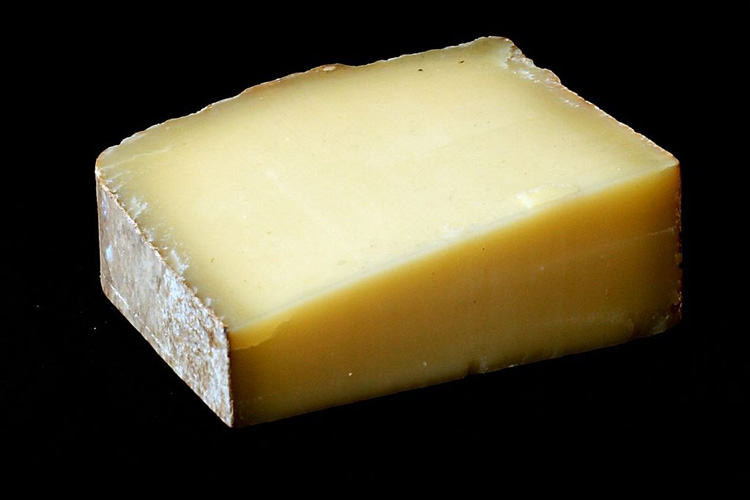 Experts say there are 83 flavors which can be savored while tasting Comte. The main aromatic flavors that linger are caramelized butter and nuts with a sweet finish.

Due to the strict AOC regulations, the only region where it’s possible to make Comte is this eastern part of the Franche-Comte, an area covering the Doubs, Jura, Haute-Saone departments and the Territoire de Belfort.

Comte’s texture and the complexity of taste make it a perfect appetizer cut into small cubes. Due to the fact that it melts beautifully, it is a traditional fondue cheese.

Comte was one of the first kinds of cheese to receive an AOC status in 1958 and is the most popular AOC cheeses in France.

Because of its uniqueness, Comte cheeses go through the process called “jury terroir” where trainer volunteers taste Compte cheeses from the region and discuss the taste of cheeses. This “jury terroir” was created by food scientist Florence Berodier in order to “speak of all the richness in the tastes of a Comte.”