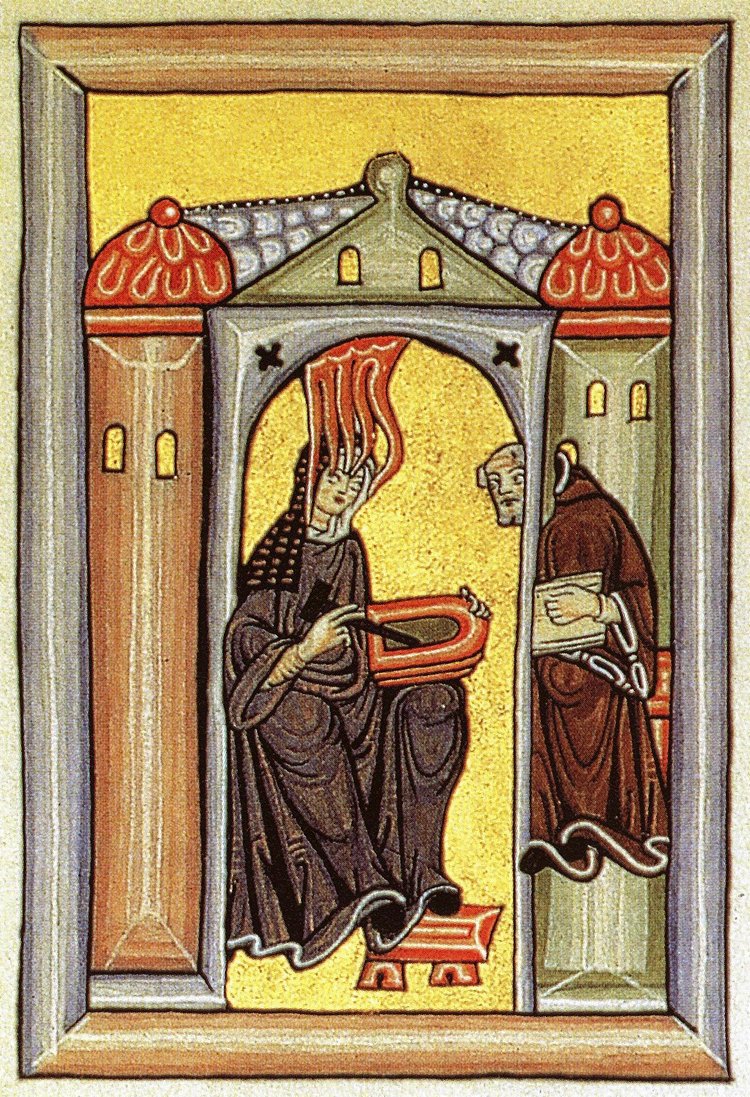 Hildegard von Bingen was a 12thcentury Benedictine abbess, composer, writer, philosopher, mystic, healer.  In a time and in a world dominated by men, she founded the monasteries, composed liturgical drama and songs, wrote botanical, medicinal and theological texts, supervised illuminations and invented a language.

She was named Doctor of the Church in 2012 by Pope Benedict XVI, the fourth woman after Catherine of Siena, Teresa of Avila, Therese of Lisieux of 35 saints that were given that title by the Roman Catholic Church.  The title is reserved for theologians who have significantly impacted Church doctrine. For her accomplishments, Hildegard of Bingen is also known as Saint Hildegard and Sibyl of the Rhine.

In recent years, thanks to her works and a kind of proto-feminist attitude, Hildegard became particularly interesting to feminist scholars and an important figure of the New Age movement due to her holistic, natural way of healing.

She was born around 1098 in a family of free lower nobility in the service of the Count Meinhard of Sponheim. She was the youngest child – tenth or seventh, depending on the records, and allegedly from a very young age, she had experienced visions which she later recorded and interpreted and which make the core of her work.

Maybe because of her visions or in order to better position themselves, Hildegard’s parents offered her as an oblate to the Benedictine monastery in Disibodenberg (Palatinate Forest). There Hildegard became a protégée of Jutta, the daughter of Count Stephan II of Sponheim, who taught her to read and write. Hidelgard assisted her in reciting the psalms, working in the garden, handwork and nursing the sick.

The two women formed the core of a growing community of women attached to the male monastery.  At that time, Hidelgard learned to play the ten-stringed psaltery and it is possible that a frequent visitor and her later confessor and scribe, prior Volmar taught her simple psalm notation.

When Jutta died in 1136, Hidelgard was elected as magistra of the community of her nuns. At that time she began pressing the church officials to allow the nuns to move to Rupertsberg. She succeeded in 1150 and in 1165 Hildegard founded a second monastery for her nuns at Eibingen.

Despite not being instructed in the Seven Liberal Arts which formed the basis of education for  the learned classes in the Middle Ages: grammar, dialectic, rhetoric arts (which included preaching, letter writing, poetry and the encyclopedic tradition), arithmetic, geometry, astronomy and music, Hidelgard  transcended the cloister she served to and through her correspondence with the outside world, both spiritual and social, a truly open-minded person appears.

She was creative in the interpretation of theology. It is said that she stated that “woman may be made from man, but no man can be made without a woman.” Despite being a woman in a man’s world, Hildegard transcended bans on women’s participation in society and the interpretation of scripture. She preached not only in her monasteries but also publicly in 1160 all over Germany attracting a number of followers. She corresponded with popes, statesmen and emperors, as well as other notable figures of the 12th century and was a fierce and outspoken critic of the hypocrisy if the Church and the society.

Despite her New Age popularity, Hildegard of Bingen is most famous for her theological texts and musical compositions and the morality play Ordo Virtutum. She also wrote one of the largest bodies of letters that survived from the Middle Ages. 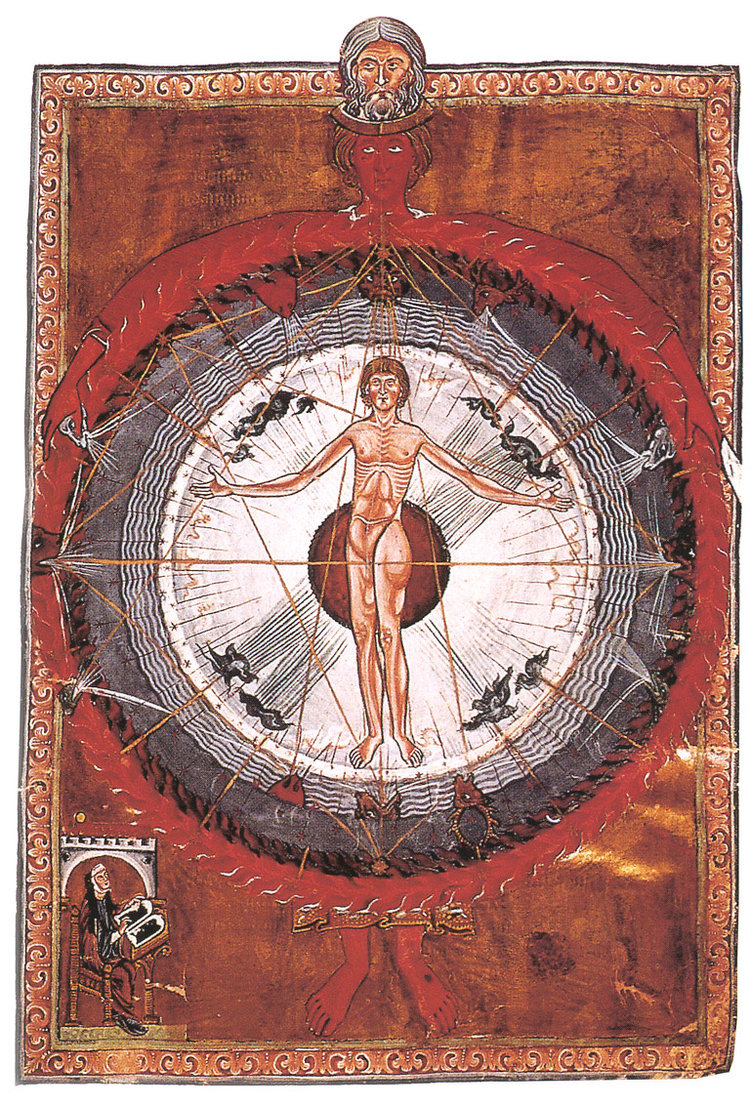 Hildegard’s most significant works were three volumes of visionary theology – Scivias, Liber Vitae Meritorum and Liber Divinorum Operum where she described the visions she was having since childhood, often with strange  details and then interpreted their theological contents in the words of the “voice of the Living Light.”

Scivias is a contraction of Sci vias Domini (Know the Ways of the Lord) and it one of the biggest milestones of Hildegard’s life. There, at a mature age, she began to record and interpret her visions. Scivias is made out of three parts. In the first part, through six visions, she chronicles the order of God’s creation, Adam and Eve, the structure of the universe, the relationship between body and soul, God’s relationship to his people.

Second part describes the order of redemption – the coming of Christ, Trinity, Church, baptism, orders of the Church, Christ’s sacrifice and the fight against the devil. Third part is dedicated to the salvation.

Hildegard’s second volume of visionary theology  Liber Vitae Meritorum deals with moral live in the form of dramatic confrontations between the virtues and the vices. One of the curiosities of this work is that it contains one of the earliest descriptions of purgatory. 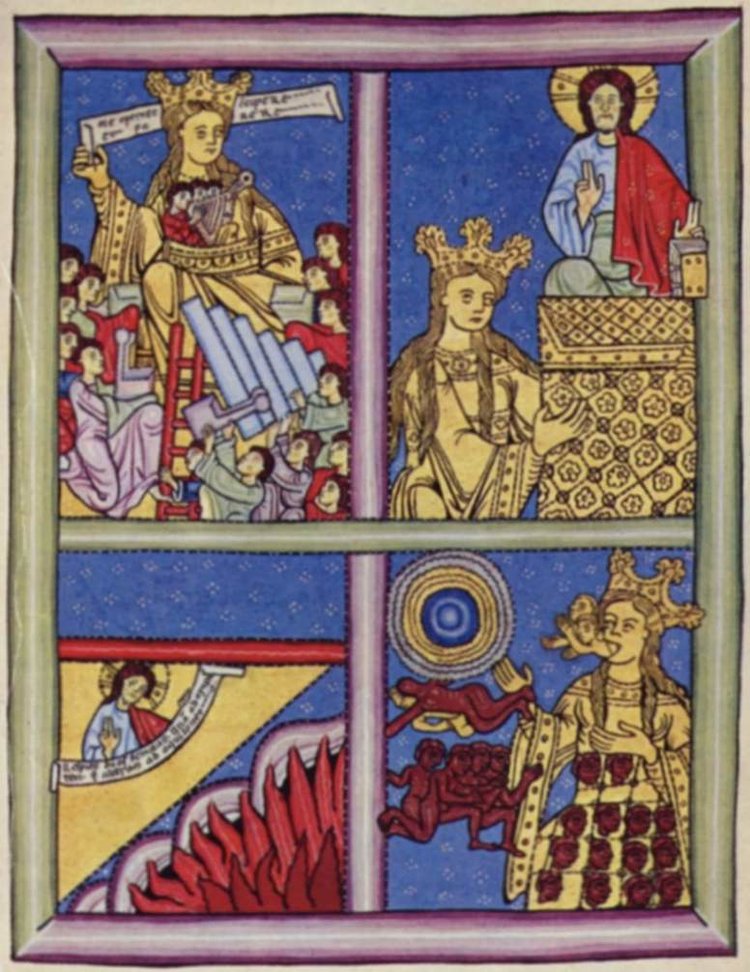 Liber Divinorum Operum is her grandest visionary work and in it Hildegard illustrates relationship between God and his creation. That relationship is often portrayed through allegorical female figures who represent Divine love or Wisdom.

The cornerstone of Hildegard’s spirituality was Viriditas, or greening power that infuses all creation with moisture and vitality. To her, the divine was manifest in every leaf, stone, flower. Everything on God’s green earth was God, though not the whole of God. She celebrated the sacred in nature, something that New Age followers relate to today. Hildegard’s visions also dealt with the Feminine Divine and in them she compared God to a cosmic egg, nurturing all of life like a womb.

Ordo Virtutum is a morality play Hidelgard composed with 82 songs. The catch with this work is that it is not supplemented nor it pays homage to Mass or certain feast.  It is the earliest known surviving musical drama that is not attached to a liturgy.  This drama was performed for and by a select community of noblewomen and nuns.

The Ordo Virtutum was a manifestation of the theology Hildegard described in the Scivias. The play is a Christian story of sin, confession, repentance and forgiveness with female Virtues who restore the fallen to the community of the faithful and not the male Patriarch of Prophets.  This “feminist” message of empowerment was directed to the nuns in Hildegard’s convent who played the parts of the human souls and the Virtues, while Volmar probably took on the role of the Devil, when performing this piece.

Despite Hildegard professing that her compositions praise the God, the reverence for the Virgin Mary and a close association between music and the female body and nature in her musical compositions as noted by Aikaterini Grigoriadour, connect Hildegard to Sappho. Like Sappho, Hildegard used her social class to present her talents. Sappho did it through her school while Hildegard through the Church. Both women relied on spirituality and both were extremely unconventional, overcoming prejudices, social norms and being a woman in a world made to suite men.

Both Sappho and Hildegard composed their music in a monophonic style and both had a unique relationship with the Divine. Sappho was considered the priestess of Aphrodite and Hildegard was an abbes. Both wrote about their cognitive experience with the Divine, Sappho with Aphrodite and Hildegard with God through her visions and conscious experience with him. Although they served a different theology, for both women boundaries between human, female nature and the Divine are fluid and they often talk of the marriage of human nature and spiritual experience. With Hildegard, this union is presented through the body and spirit of the Virgin Mary, with Sappho through the Greek goddess of love and beauty.

Through their poetry and music, both women contributed to the spiritual development of their societies, taught their students and followers religious beliefs and practices. 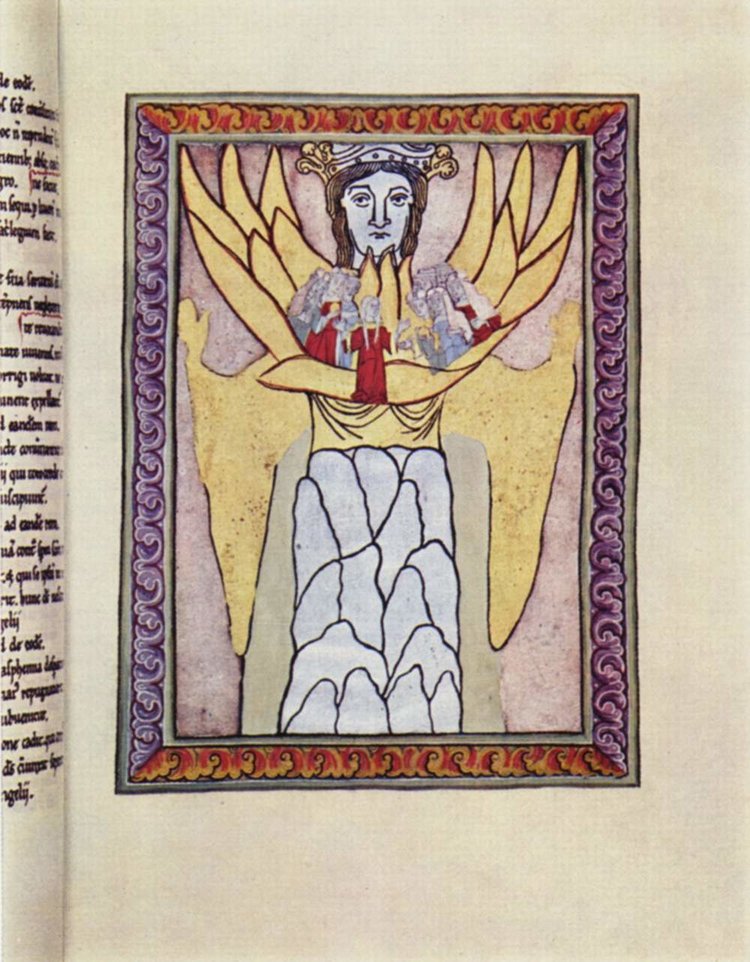 Hildegard’s beliefs and spirituality are evident in her medical work. As someone who tended and nursed the sick, Hildegard gained practical skills in diagnosis, prognosis and treatment and combined physical treatments with holistic methods centered on “spiritual healing”. Her practice included the application of tinctures, herbs and precious stones, along with prayers, theology and knowledge she acquired from Latin texts.

She wrote two volumes of material on natural medicine and cures that she used to teach assistants at the monastery.

The second – Causae et Curae deals with the human body, its connections to the natural world, the causes and cures of various diseases. In it, Hildegard views human body as a microcosm connected to the macrocosm of the world. There is a vital connection between the health of the natural world and the health and balance of a human being.

In Causae and Curae Hildegard gave instructions for bleeding – a common medicine in Middle ages – however, these instructions were specific as they included gender, the phase of the moon, the place of disease and how much blood should be taken. She also described how to check patient’s blood, pulse, urine and stool in order to set a diagnosis and prognosis. There is also a part on lunar horoscope that should be used in giving prognosis.

In her medicine work, she wrote and focused on the interrelated patterns of four – elements, seasons, zones of the earth, major winds, the four humors – blood, phlegm, yellow and black bile and how the imbalance of these humors results in disease.

The “feminist” principle that guided Hildegard  in every aspect of her work, her open-minded attitude is evident in her description of the female orgasm in Causae et Curae, believed to be the first of a kind.

“When a woman is making love with a man, a sense of heat in her brain, which brings forth with it sensual delight, communicates the taste of that delight during the act and summons forth the emission of the man’s seed. And when the seed has fallen into its place, that vehement heat descending from her brain draws the seed to itself and holds it, and soon the woman’s sexual organs contract and all parts that are ready to open up during the time of menstruation now close, in the same way as a strong man can hold something enclosed in his fist.”

Hildegard also invented an alternative alphabet Litterae Ignotae which served as a secret code. She wrote in this form of modified Latin, using many invented or abridged word. Scholars believe that she used her “Lingua Ignota” to increase solidarity among her nuns.

Hildegard was an incredible woman in a dominantly male world. Educated, opinionated, persistent, talented, smart and open-minded – Hildegard von Bingen was a (proto) feminist in the best possible way.