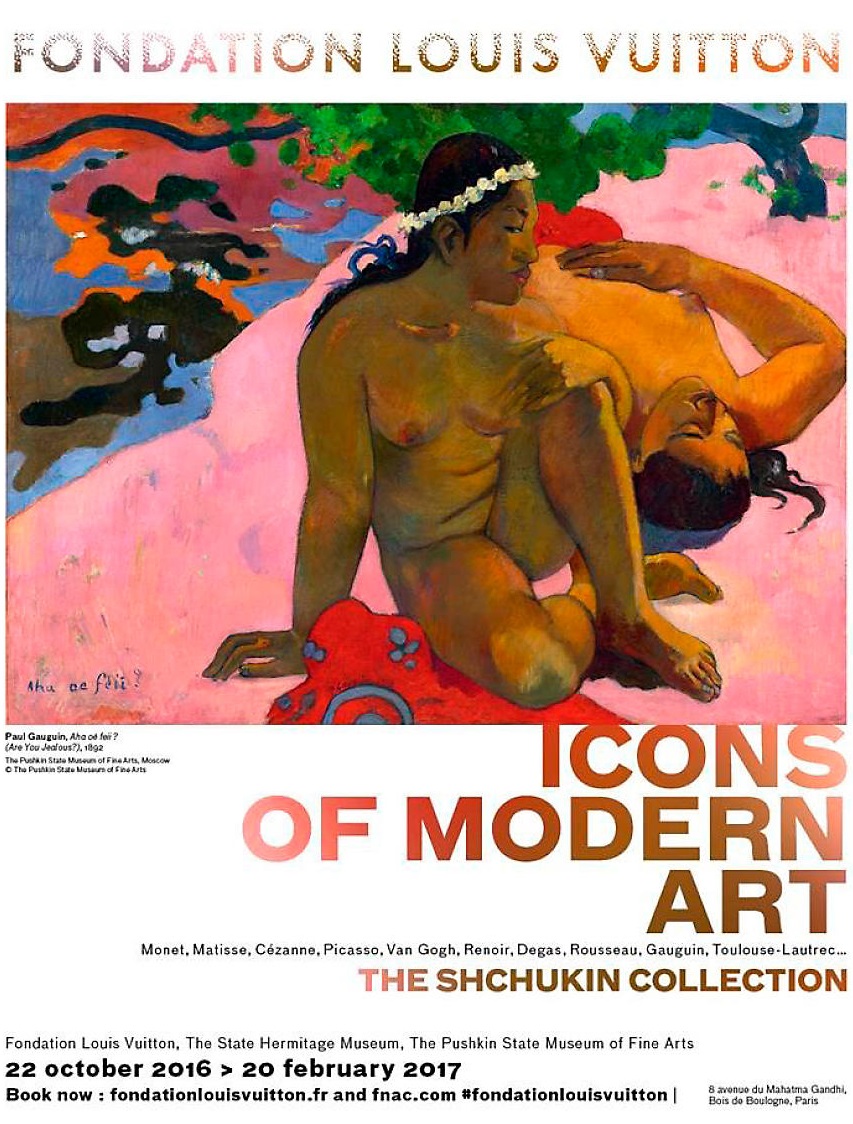 It is a proper shame that we didn’t get to write about this exhibition sooner, as it in fact was one of the hottest happenings on the Parisian art scene, if not the hottest. A newly opened Louis Vuitton Foundation, housed in a mega-expensive and equally provoking building done by Frank Gehry, wants to let everyone know that they mean business ; so, they obtained the entire collection of the famed Russian pre revolutionary art collector Sergei Shchukin. This was no easy feat – his collection was divided between several moscovian museums and was re-assembled for the first time for this occasion. So, an exclusive in more ways than one.

If you haven’t been to the foundation before, it is hard for your attention not to be turned (or, more appropriately, completely consumed) by the building itself. It is made to be shocking, provoking, imposing. A far cry from the habitually parisian Haussmanian architecture, this piece of bold architecture could only ever “function” separated from any other building or urban context. That is exactly what the architect and the commissioners had in mind, so, in order for you to reach it, you will have to leave Paris and go to bois de Boulogne. For some, this place is known as a chill picnic spot and a lovely park ; to others, more highbrow related, for its hippodrome and various horse related facilities ; to some others, more lowbrow inclined, for its many prostitutes that tend to come out around sunset (but if you happen to run through the more woody and secluded parts of the park, you can stumble upon some in the morning or any time during the day, as is spoken from experience).

Being of that nature, the bois de Boulogne seemed like a perfect site for the Louis Vuitton Foundation – a site where, much like in modern and contemporary art, the pretension, sleaze and mundane banality coexist and merge synergically. Still, try to erase all of this out of your mind when visiting the exhibition as it would be a shame for you not to give it your full attention. 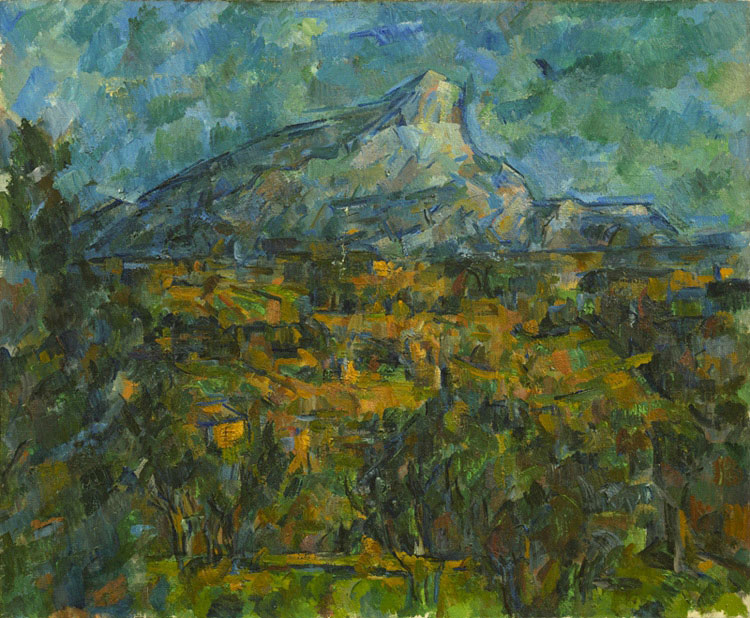 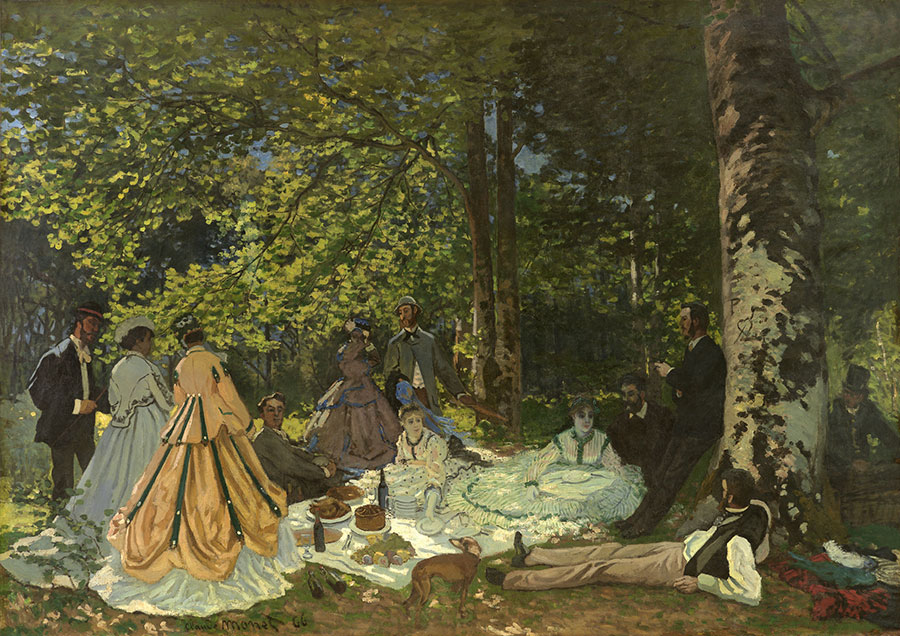 In all honesty, the collection of Picasso’s work here presented is better than the one his own museum in Paris has on display. Not only because some/most of their work tend to be on loan to other museums ; mostly because this is simply a more complete collection. It is also better contextualized, as you can see his work on display next to his main rival, Matisse. Picasso spent most of his early days (but a considerable portion of the later ones as well) being wildly jealous of Matisse. It is something that has profoundly marked his work – in his mind, he was in constant competition with him, constantly trying to outdo Matisse, if not in the realm of the visual, surely in that of the French socialite blazé circles. This is a topic that deserves its own post, but it’s also important to mention it here as this exhibition is an occasion (that does not come along so often) to see an important amount of their work on display at once. 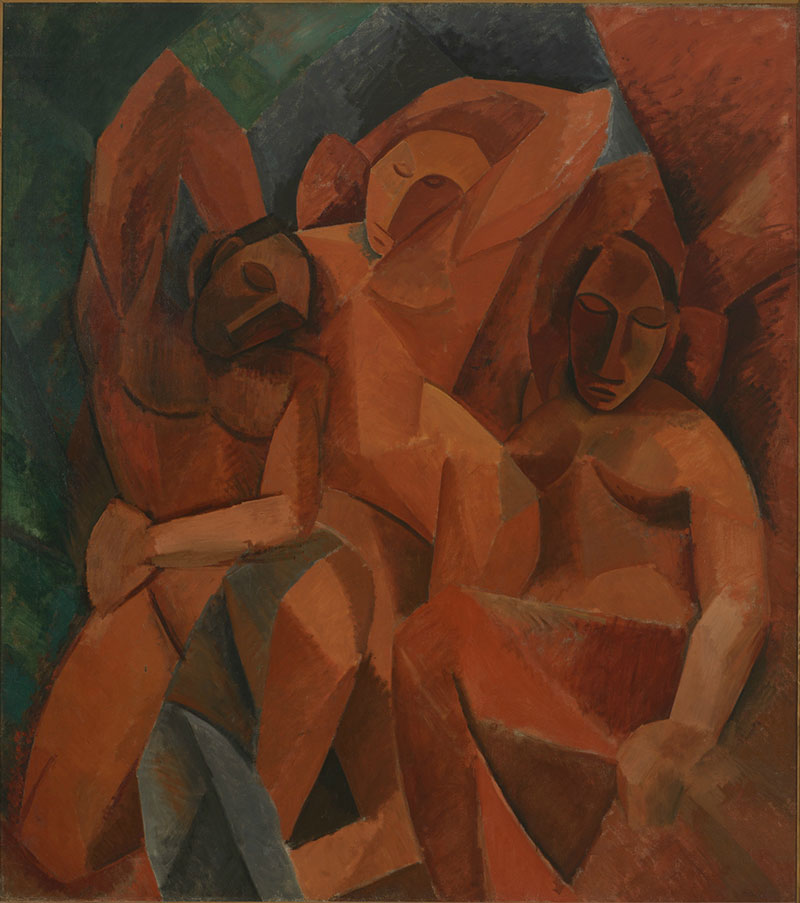 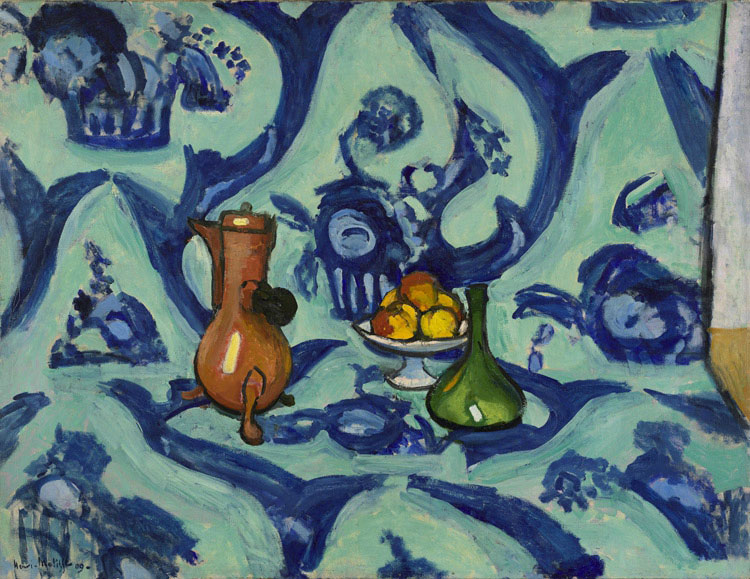 Also, it is a great opportunity to see the work of the European artists of the given era on display alongside the Russian ones. Many interesting parallels can be drawn between ideas that were rolling around the Russian and the western European artistic circles, with names like Matisse, Picasso and Braque on one side and Malevich and Tatlin on the other. Many theses and dissertations are to be written on the subject and we’d guess that many already have been. 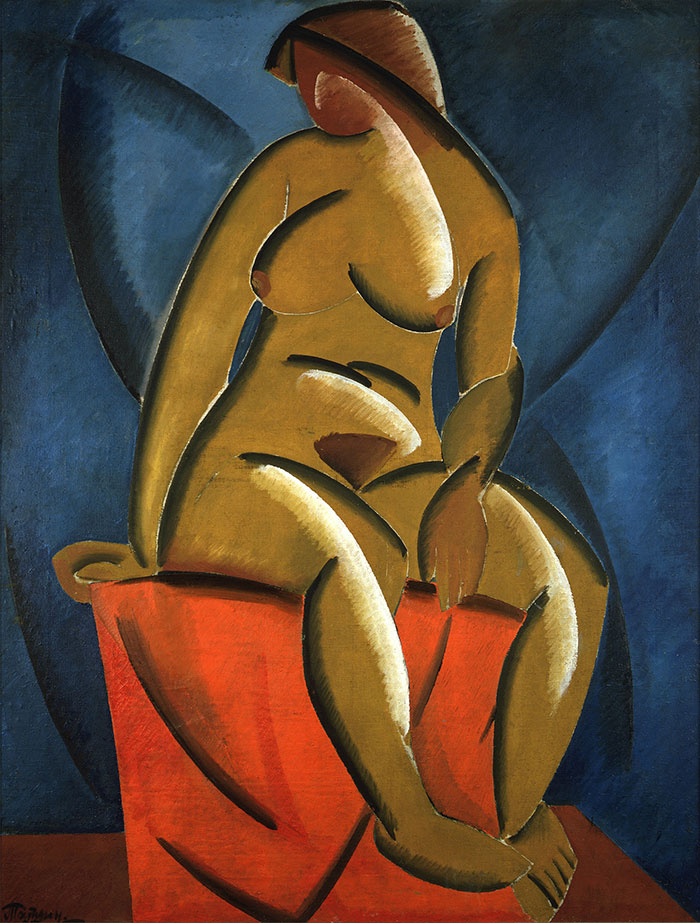 In any case, a very interesting moment of the history of art is captured in this collection. While the Orsay museum focuses mostly on the second half of the 19th century and dwells little into the 20th, and the Pompidou center seems to be mostly about the 20th century with an emphasis on the period after the world war I, this collection situate itself exactly in between the two. The art is decidedly post-impressionist, but not quite expressionist ; we see the germs that will later come fully developed in the different fractions of the avant-garde ; we get to witness the transition not only of centuries, but of styles, eras, schools of thought.

There is something definitely and decisively decadent about this show, although it is somewhat hard to define. Although the collection is situated in the most expensive and lavish piece of architecture that has been undertaken in a while, this feeling comes from the collection itself rather than from its current setting. Looking at this art, even if you are not familiar with the historical context of the French colonial empire, huge sums of money and resources rolling into the mainland France (while most of the people are living below any conceivably accepting life standard), the European order slowly cracking, to ultimately complete explode in the world war I ; even if you are not familiar with all of this you can still feel the tension seeping from these paintings. Even if they are done by very different artists and are connected with different movements and styles (post impressionism, fauvism, cubism, pointillism suprematism etc.).

They give away an impression of the last days of, well, something, or everything – a drunken folly and abandon that is only there to thinly disguise the rage trembling behind it all. It seems like a colorful canvas that is thrown atop a very ugly, gaping hole that is slowly expanding – we are beginning to see its emptiness as it becomes larger than the canvas in question. Again, if you are familiar with the historical context, and if you are (exceptionally) intuitive, you might get this feeling from looking at a single painting belonging to any one of these authors – but placed together like this, in such large numbers, the impression is not going to escape you. It didn’t escape us, that much for sure.

So be prepared to be shaken and amazed, wowed but also made to feel uneasy. These paintings, with all the bright colors and simplified forms, are not an expression of joy. They hide something sinister, something that perhaps the artists themselves were not necessarily aware of, or were capable of formulating more concretely. Still, it lingers in their work. And gathering all these paintings helps to distill and enhance that feeling so that it come to the surface plainly and visibly to all. The fact that the collector in question was Russian just amplifies this sentiment ; Russia saw not only world war I, but also the Bolshevik revolution and the sequent creation of the Soviet Union. This collection, as well as this type of art, were the last moments (no matter how critical of wealth and capital they may have been – for example, Picasso was a member of the Communist party, but was that on account of his opportunistic thinking or out of his genuine conviction, you be the judge) of the immensely wealthy 1% of their time splashing away their money as they liked. 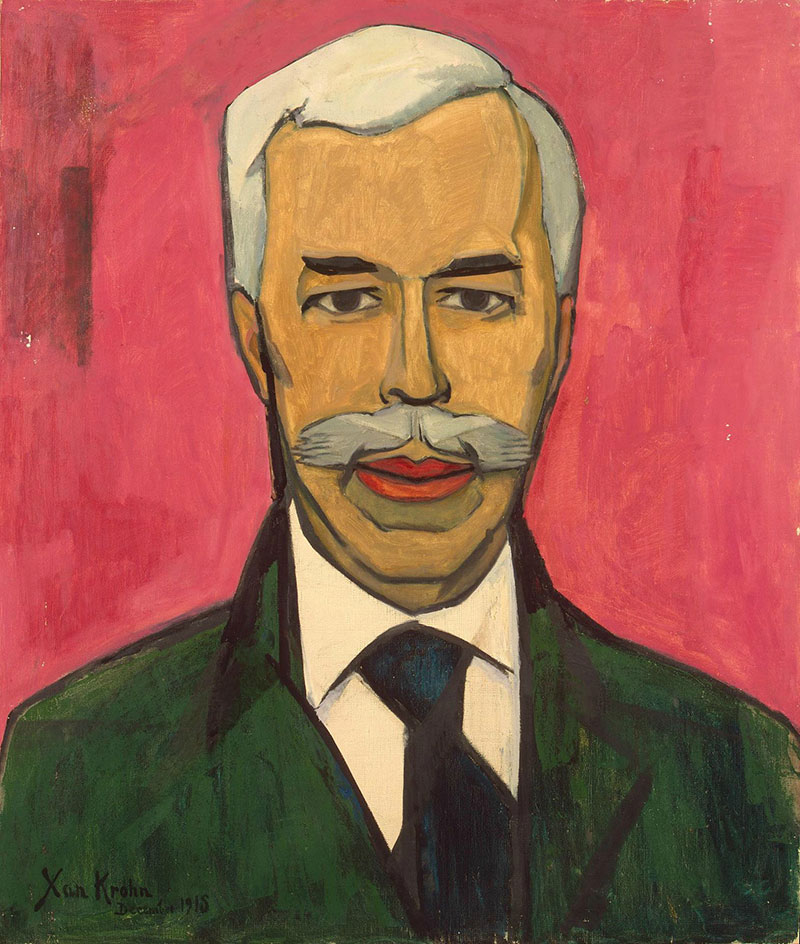 So, to conclude, see the exhibition, it is well worth of the waiting in line you will likely have to endure. As we said already, it is a shame that we didn’t get around on writing about it sooner, but seeing how it closes on the 5th of March (and may likely be prolonged) you have a good month and a half to do it, so all is hopefully well. A word of advice, try to go there in the morning rather than in the evening, if you don’t wish to be targeted by a pack of transvestite “ladies” of the night that hang on the premises. If however you do, aim for the closing hours.