It is one of the islands situated on the Seine river west from Paris. Its name comes from the fact that many impressionist painters used this place for creating, but also as a place of gathering. Monet and Renoir spent some of the most important moments of their careers on this island; Giverny not being the only mystical impressionist oasis.

Just as a quick reminder, Impressionism is a 19th-century art movement that has its roots in the visual arts, or more precisely in the painting, but then expanded to music and literature as well. As all art movements, it first started as an opposition of the existing one, the academic painting, that was oriented towards historical themes, while Impressionism was inspired by modern life as it was at the moment. Impressionists were the first to encourage painting in nature, seizing and painting landscapes in the middle of them and not in the studios, as it was done before. As for the painting technique, Impressionism is known for its small, but visible brush movements and an extraordinary use of the light in the paintings.

Except for being known as an inspiration for the impressionists during the second half of the 19th century, this island is also peculiar for one geographical reason as well. It is actually made of two islands and is about 4,5 km long altogether. Being situated between two smaller towns Rueil-Malmaison and Chatou, it is hard to define where it belongs. No matter if you are an aspiring artist looking for inspiration or a tourist, trying to get away from the city center and its chaos, I am sure everyone will find something to enjoy among the choices that the island offers such as horse riding, restaurants, parcs.

An important venue of the island is also its museum (Musée Fournaise), that is currently offering a powerful exhibition on Renoir, called “Renoir, the Impressionist, an immersive experience”. The exhibition is made to mark the 100th anniversary of his death and will be open until the 27th September 2020. If you are planning your trip to Paris before this date, make sure to put this exhibition on your list of things to see. As promised in the title of the exposition, it really is an immersive experience, where the visitors are guided by Renoir himself. The exhibition focuses both on his life and his art, through multiple digital assets, such as holograms, virtual reality and interactive paintings.

The last impressionist painting that Renoir ever painted “Luncheon of the Boating Party” made in 1881 (French: Le déjeuner des canotiers) is particularly famous in this region for being made on the island. This painting is actually made on the terrasse of today’s museum and restaurant Fournaise, which was only a restaurant at the time. He invited his friends to gather at this restaurant and painted them during the whole time.
This resulted in a painting that harmonizes figures, a landscape and still-life. Paying great attention to the light and the movement of the brush, Renoir has received extremely positive critics on the Seventh Impressionist Exhibition in 1882, where it was first shown. 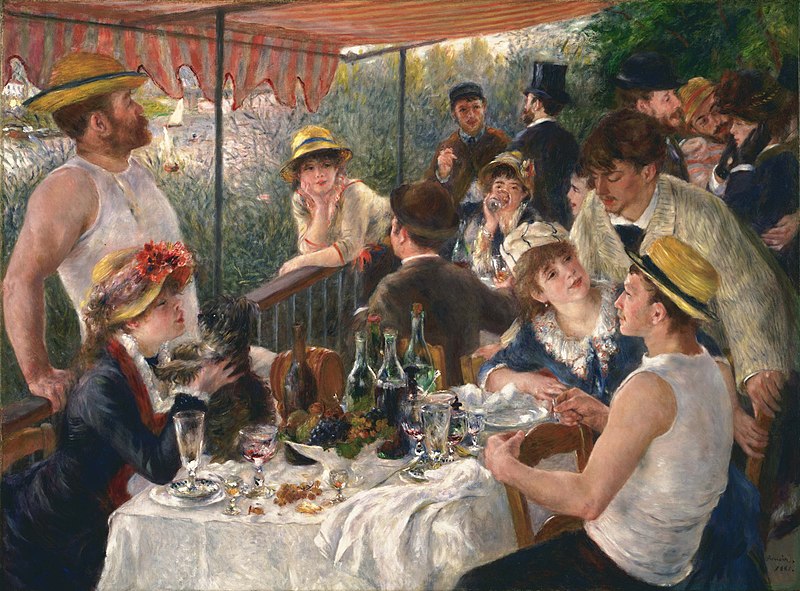 This painting has also reached significance in the pop culture appearing in the film “Amélie” (French: Le Fabuleux Destin d’Amélie Poulain, 2001, by Jean-Pierre Jeunet) and having a quite important role. The main character’s friend and neighbour who is a painter is working on a replica of this famous painting, explaining that one of the characters in the painting is actually her – Amélie.

The terrasse where the painting has been made today looks like this, on a sunny day it is not that hard to imagine Renoir making art in front of his canvas more than a century ago.

Today the whole region is entitled and certified as the “Land of the Impressionists” (French: Pays des Impressionnistes) proposing four different walking paths with more than 30 reproductions of impressionist paintings along the way. The paths are named after the painters whose work you can discover following each of them: The Sisley Path, The Pissaro Path, The Monet Path and of course The Renoir Path.

Besides the usual offer of the site, the island is also a place of different events such as:

– National fair and flea market – two times a year, once in March and in October, the island gathers more than 800 stands with antiquities and second-hand merchandise, but also with various gastronomic specialties. Its long tradition dates until the year 1970.

– Elektric Park – a festival of electronic music organised once a year. If, for you, this kind of music goes together with having fun, save the date of the 5th September 2020 for the 11th edition of this festival.

– Circus – throughout the year different circus groups (such as Cirque Joseph Bouglione or Cirque Arlette Gruss) are visiting the island and performing their best plays.

If you decide to visit this beautiful and calm island, it is only a 20 minutes ride away from Paris city center. The RER A in the direction of Saint-Germain-en-Laye would take you there in no time.