Our visit to the former quarry catacombs

While we’re nowhere near done transmitting Amy’s catacomb adventure, we’ve had the chance of visiting those ourselves – in all honesty, we visited a completely different section of it, so you can read both of our reports. Our visit to the catacombs involved the old and now defunct limestone quarries that are situated under most of the city of Paris. A cataphile society (yes, there is such a thing as is a society of lovers of catacombs) has made extensive efforts into mapping out these spaces, signifying which quarry was where and in which state it is nowadays.

You’d be surprised to learn just how much of the city of Paris is actually above former quarries, some of them private – situations where people would be literally extracting stone out of their basements. That off course meant that most of the city had to be reinforced from the underground – but that is a different story altogether, one we hope we’ll get the chance to further explore. For the moment, enjoy these photos and let us know if you feel adventurous enough to visit these – perhaps we can make it happen. 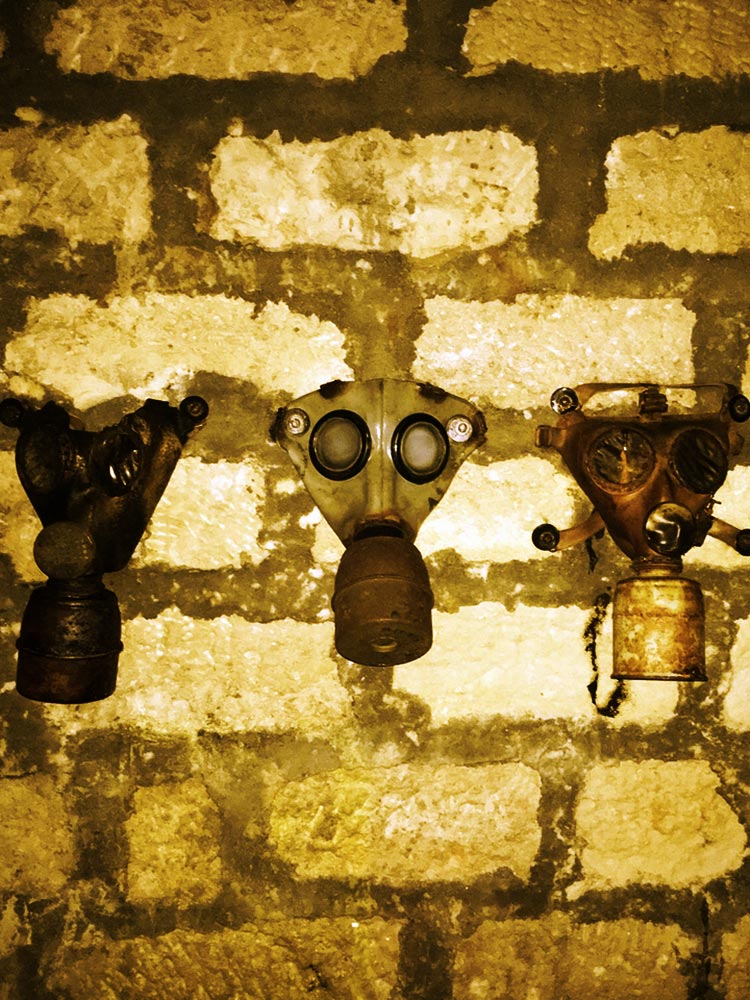 At the entrance you pass through the part of the quarry that was adapted in a bunker during the WW2. Here you can see some remnants of those times, more precisely gas masks. 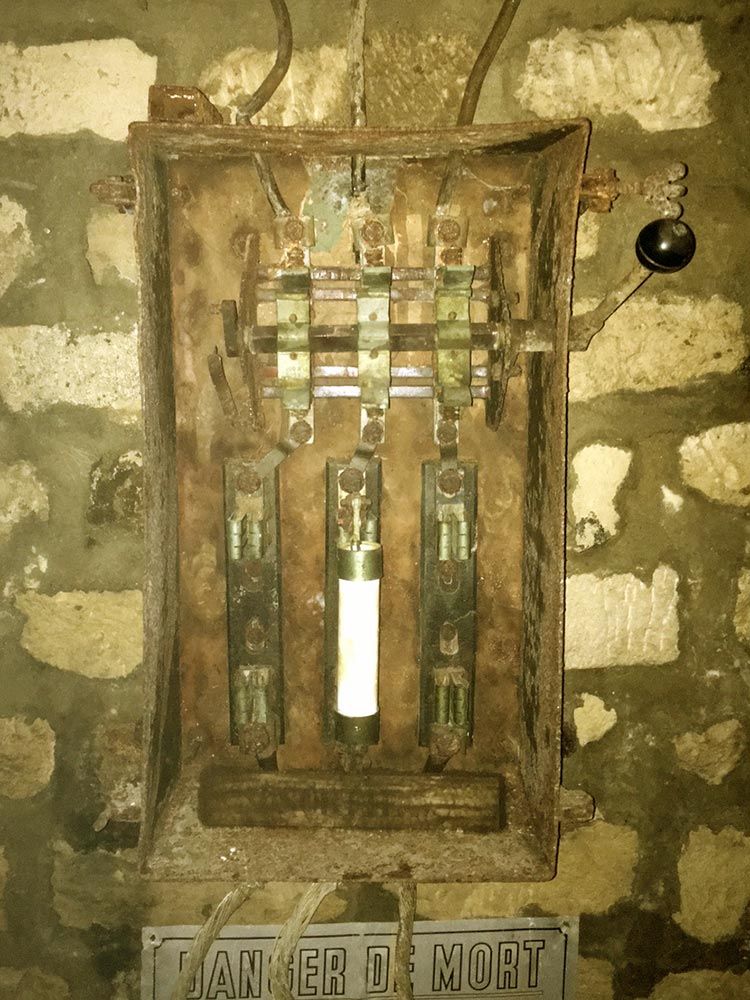 Same here, as we see an old fusebox 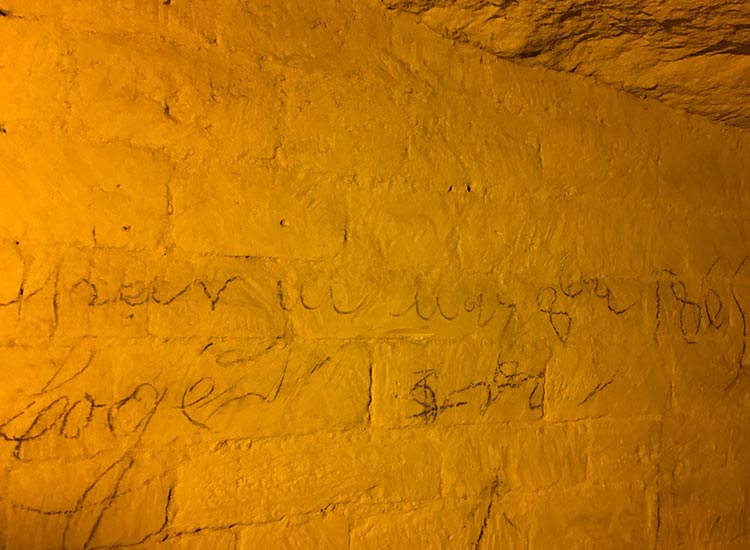 Here you see some centuries old vandalism, where a visitor to the catacombs just had to leave a trace of his visit. 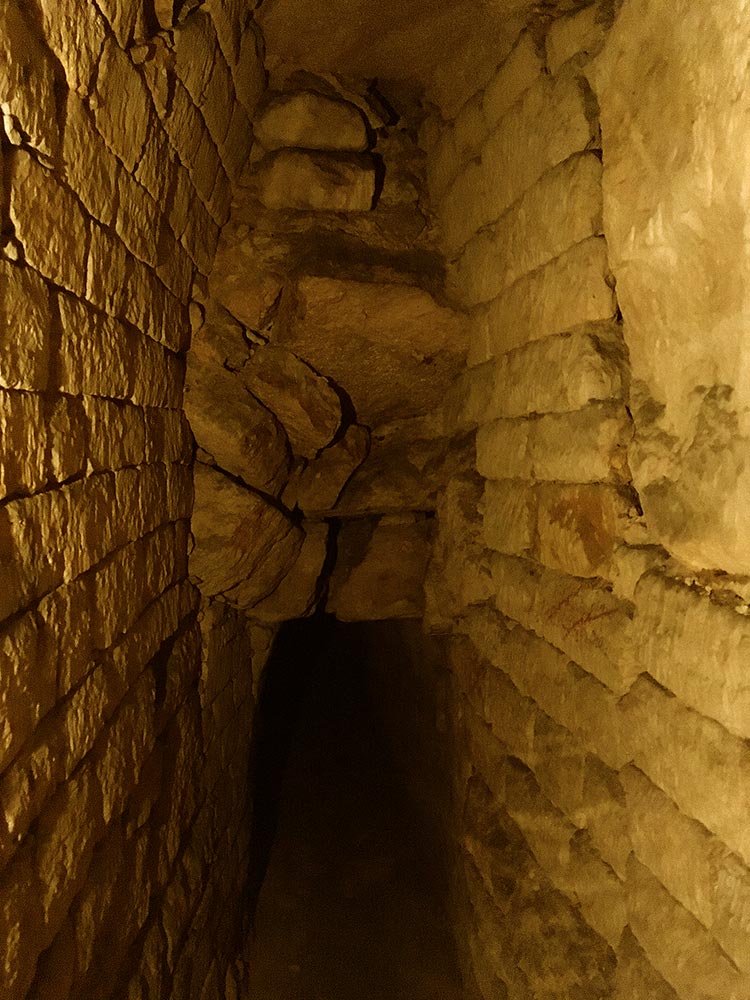 Further down the tunnel, we reach a veritable gem – a cave-in frozen in time and secured (we hope at least), kept in a state where you can see it as if it was stopped on a movie. Must have been fun to repair it back in the day. 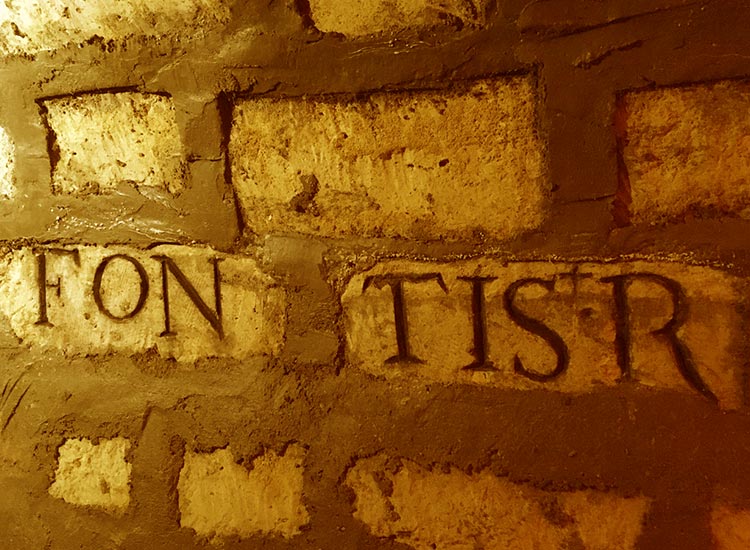 Another patched up tunnel. Markings on the stone signify that it was a rupture of the wall repaired. Makes you think about all the cave ins and all the trapped stone masons. They went down these narrow tunnels, day in day out, full knowing that any of the tunnels can cave in anytime. It made us appreciate all the stone used to build churches and alike even more – in other words, made us wonder (yet again) over the actual cost of those monuments, this time not only in money, but in human lives as well. 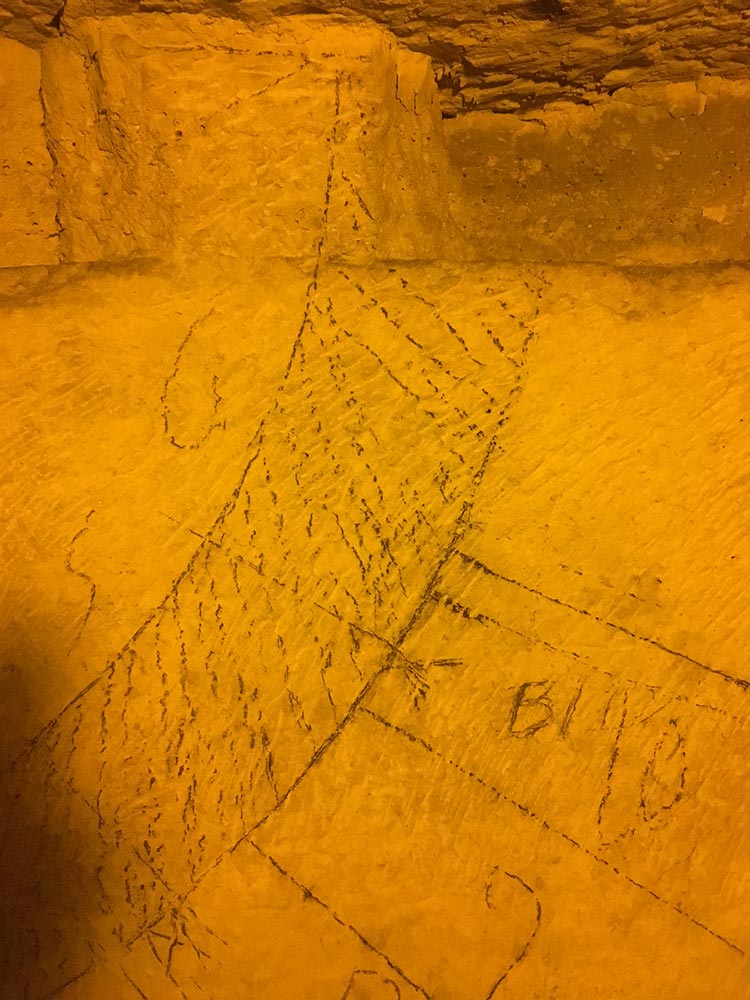 This is how the stones were marked before they would be cut out. They would know the purpose of the stone they were cutting out and of which exact shape it needed to be, so they would draw it out in chalk. What is rather amazing here is that this chalk sketch is over 200 years old – the unchained temperature and air humidity that is constant in these corridors made the chalk look as fresh as the day it was applied. 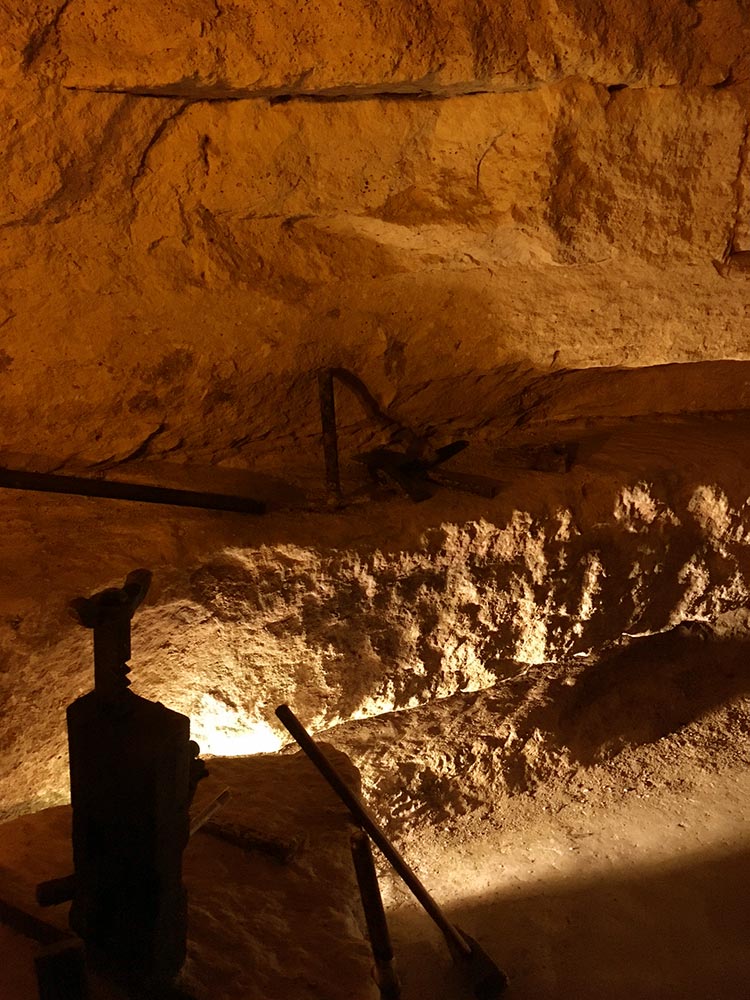 These are some of the tools they would be using to cut the stone out. It is only here that you see what a grueling and tiresome job it was. You needed to make a cut in the wall (that you can see at the top of the photo) and the slide in the cutting tool, and cut left and right until you get the right shape done. Those tools are heavy! You can lift one and see just how much. The level of strength and patience it takes to swing it left and right all day long is rather stupefying. 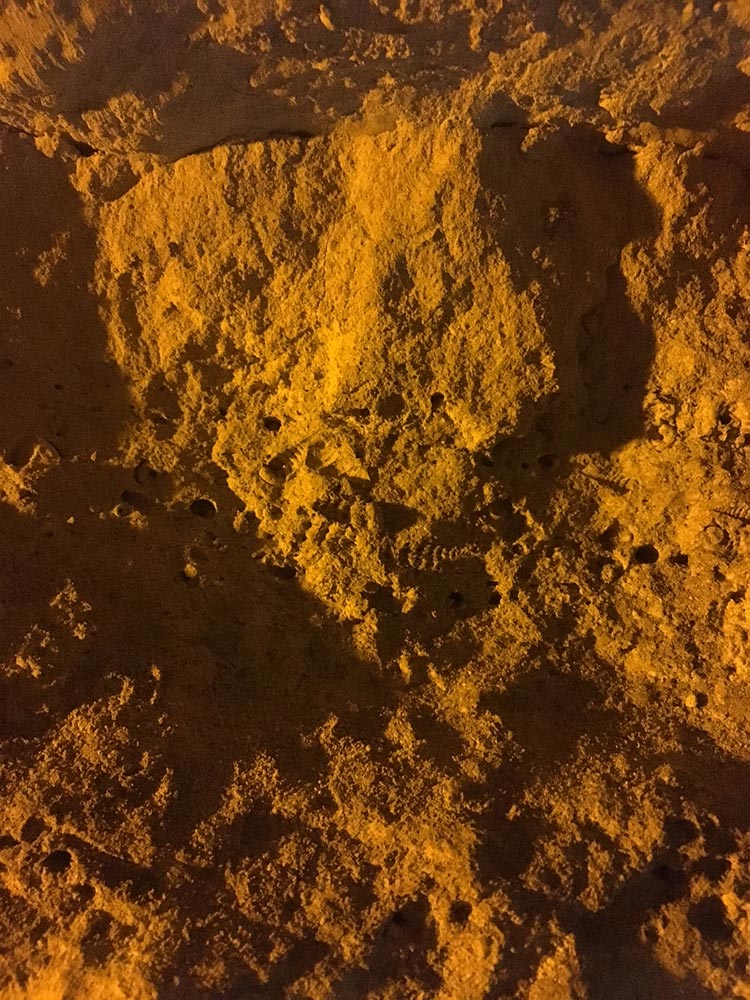 This is a closer look to the quality of the limestone. You can see many fossil remains, some of them over 40 million years old, integrated into the texture. 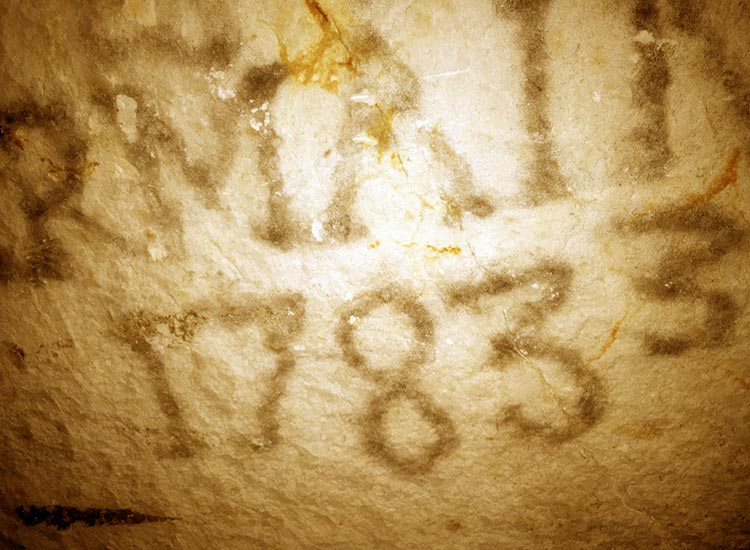 Here is a certaine Germaine, a lonely and misunderstood artist of the late 18th century. What was done here was a candlelight graffiti – he (or she, as it is rather a girl’s name) would use the candle light to draw out its name and date when it was done. As you can see, this work of art in line of Dali’s signature on a blank canvas dates from 1783, as the signature is the work of art. Put that in your pipe and smoke it, Dali, you uninspired hack! On another note, back in those days candlelight was the only thing they had down there. Which means they mostly worked in the dark. Which again brings us back to the re-appreciation of all of the stone buildings we ever saw in this city. 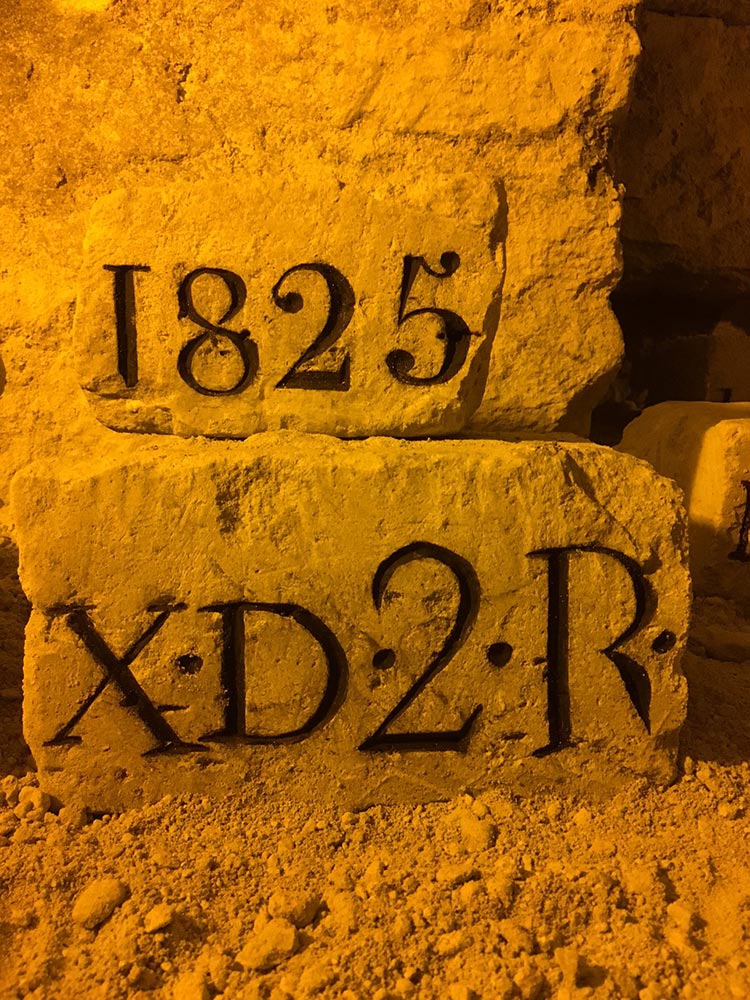 Here be an interesting bit of info – a stone that comes from the 1795, right under a stone that comes from 1825. How do we know the first one comes from that year ? Well, the fact is that the French revolutionaries started using a different calendar in 1793, being ambitious people that they were and wanting to cut off all the cultural ties with the church, even their time counting (which, as you know, starts with the birth of Christ). So they came up with their own calendar. This here inscription signifies that the stone in question was marked the second year of the revolution. The one above states that the new time counting method was abandoned and we came back to the old one, which we still use.

King’s logo of king’s quarry from where king’s stone was extracted by the king’s loyal subjects. 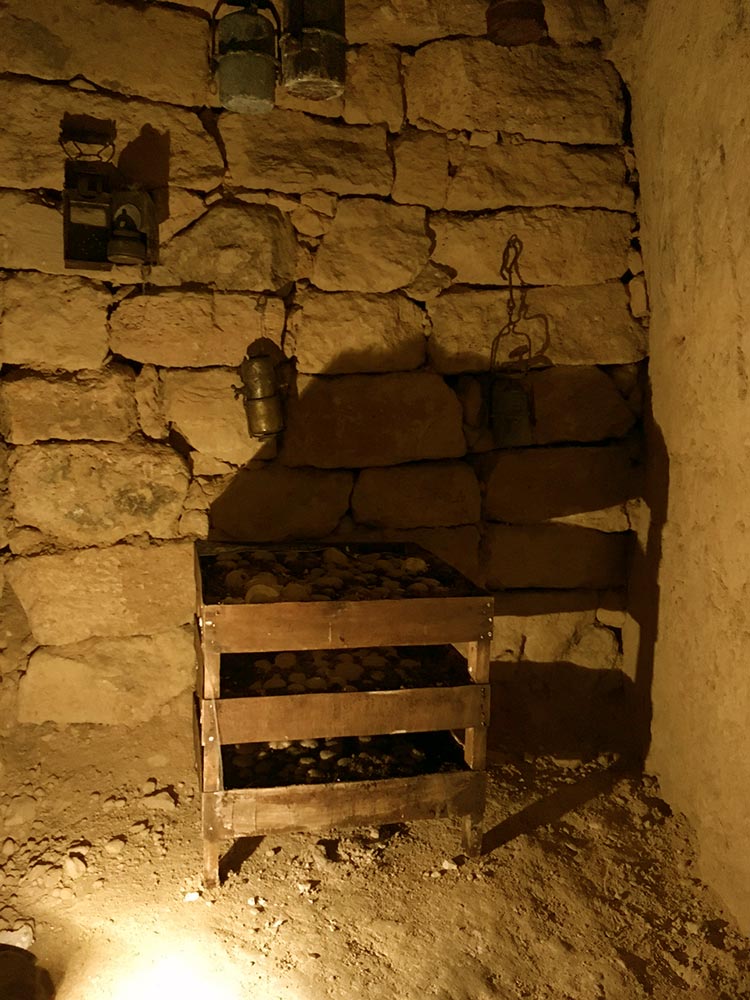 Here be mushrooms, another thing that was cultivated in these quarries. It is in fact where the famous champignons de Paris come from. Multitasking in the 18th and the 19th century – take that Steve Jobs, you uninspired hack! Or was it Bill Gates who came up with multitasking ? One of those guys anyhow. 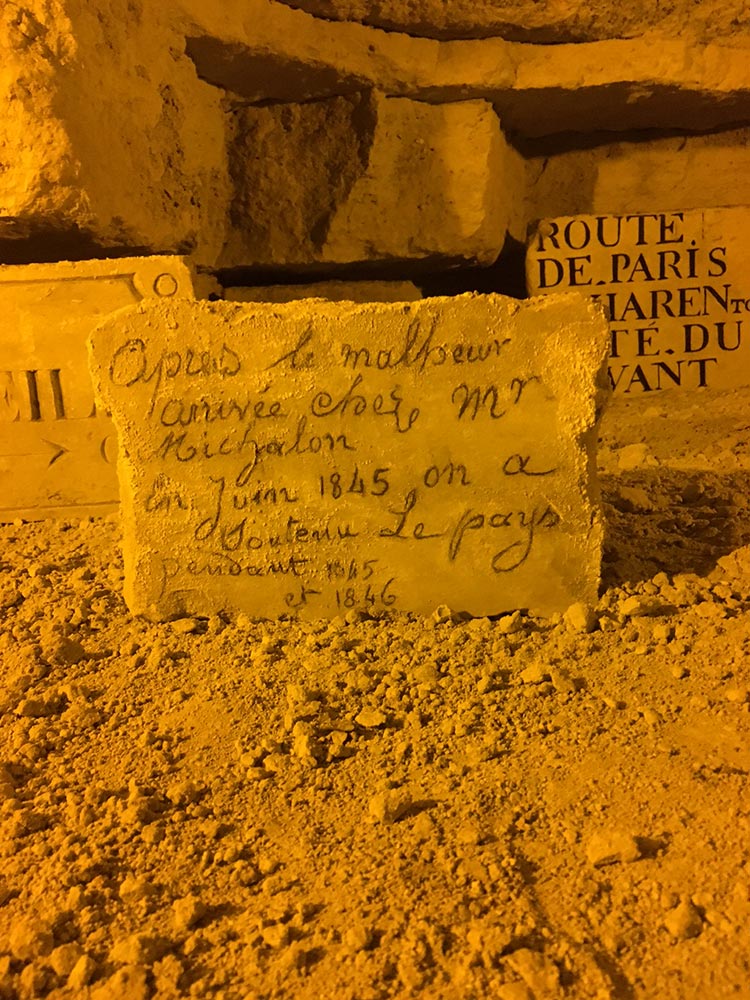 Here we have a longer confession written by a quarry worker. Most of them were literate, somewhat of a surprise given the general state of France back in the day. Yet, if they spent most of their ours here, it is only normal they wanted to leave a trace of it somehow. 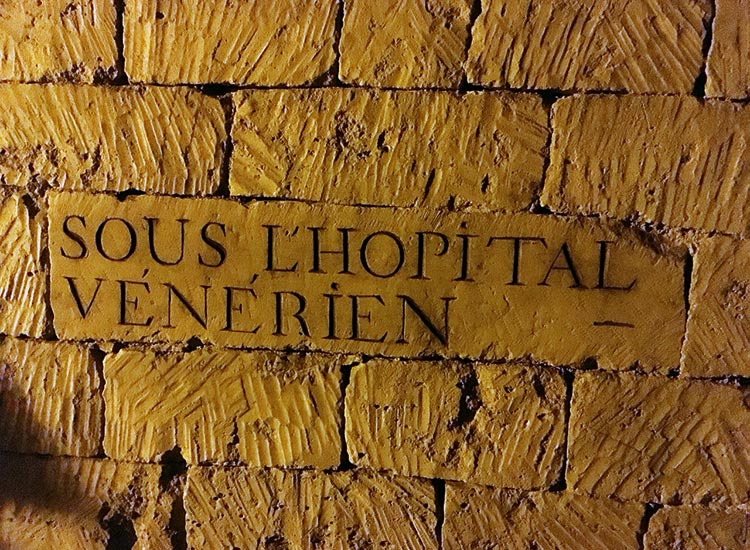 An interesting detail. These corridors bore names of the streets that were above them, as well as of prominent buildings. It made the orientation easier – it also meant that to a certain extent, these corridors were like an underground copy of the streets of Paris. Here it is stated that we are “under a veneral hospital”. Dig carefully around that one. 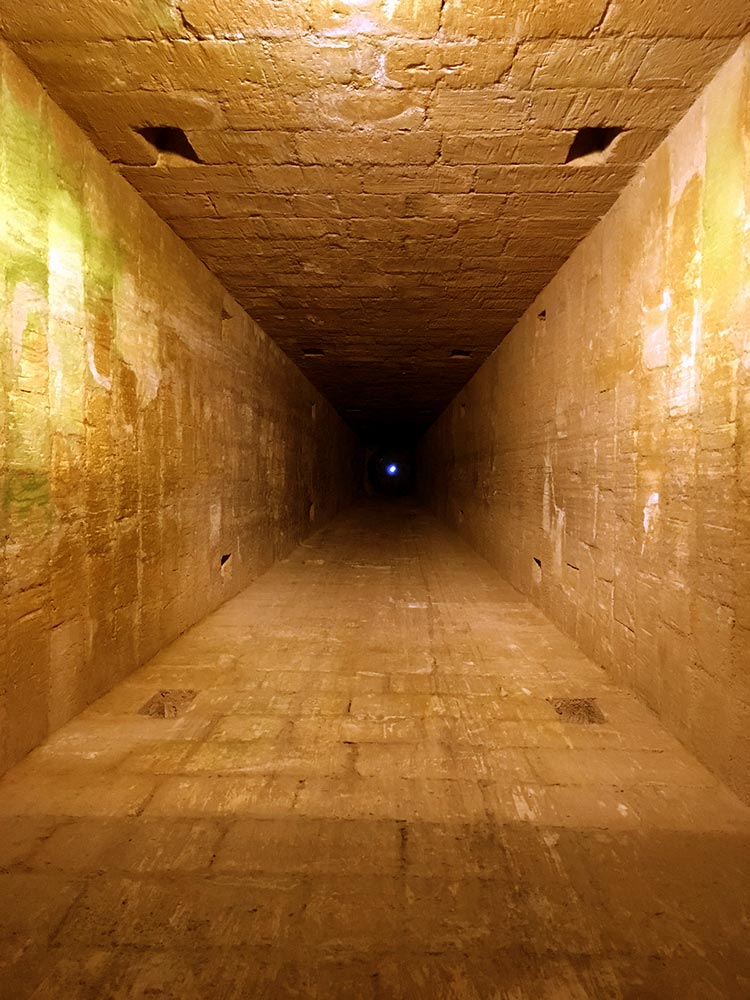 At the bottom of a very deep well. The uniqueness of this one is that it is possibly the only well that was dug upwards rather than downwards. It is a long way up (very symbolically so) 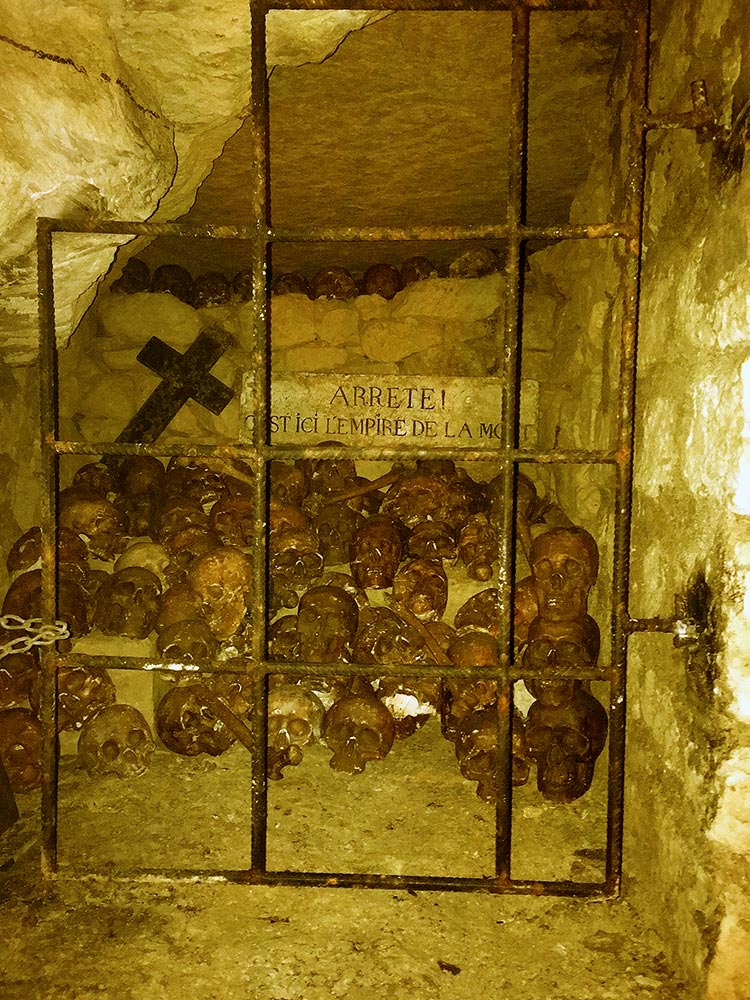 Finally the best way to wrap this visit up is by some genuine (Parisian) fakeness. This part of the catacombs was never used as an ossuary (though that part is not really that far neither). Rather, they made this to be used in many movies that are made in this part, given its accessibility and safety. So these are actually movie props rather than the real deal. For those, you either have to go to the Catacombs museum or take a stroll around the forbidden part of the catacombs (as our brave podcast guest Amy Plum did – more on that in the blog posts to come).

So what did you think about this little underground excursion ? If you found it to be to tame, wait for the next entries – we’ll continue Amy’s saga filled with plenty exciting and actually dangerous spelunking.