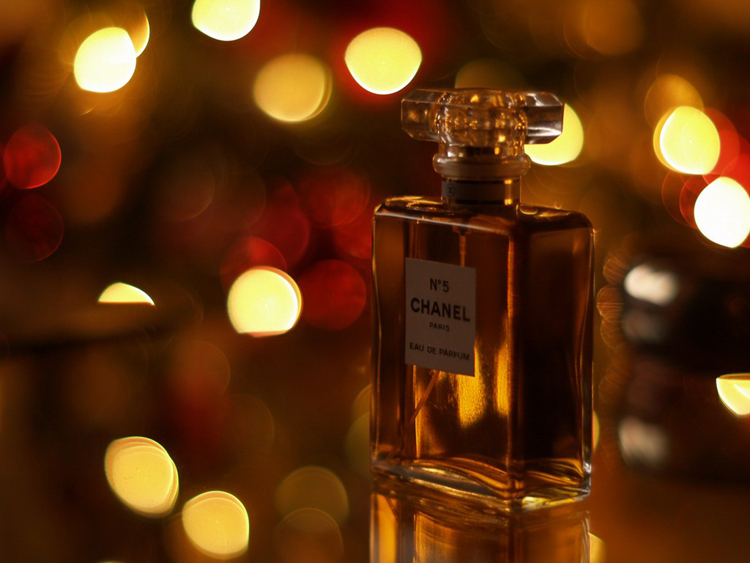 If you want to adhere to that “When in Paris act like a Parisian” then perfume is a must. It is one of the essences of French girl chic, along with mariniere, beret, cigarettes, red lipstick and espadrilles.

Any perfume, whether it is floral, “oriental,” wood, leather or chypre, adds that “je ne sais quoi”  element, that aura of French chic to every outfit and makes you feel fashionable, trendy, classy – like a true Parisian.

The art of perfumery came to Western Europe in the 13th century and prospered in Renaissance Italy. In the 16th century, Catherine de Medici’s personal perfumer Rene the Florentine brought Italian refinements to France which quickly became one of the European centers of perfume and cosmetics manufacture and, along with Italy, still is. 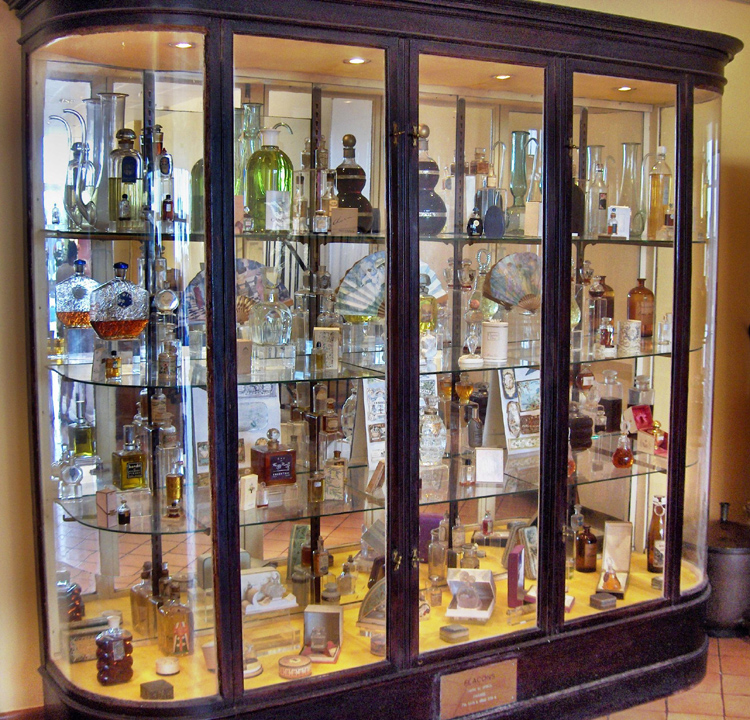 Despite the abundance of amazing perfumes and perfume-makers from all over the world, one perfume stands out in our collective memory as THE perfume whether you like it or not. Chanel No. 5.

Chanel No.5 is Gabrielle “Coco” Chanel’s first perfume. The combination of the fragrance made by French-Russian perfumer Ernest Beaux and bottle design makes this perfume Chanel’s most famous product.

Story goes that Coco Chanel, who spent her adolescent years under the care of nuns, wanted to create a scent that would appeal to the liberated, spirited young women of the 1920s but also capture the scent of fresh linen she remembered from her youth in a convent and to recreate the favorite scent of the Russian Czarina Alexandra that was a mixture of rose and jasmine.

Chanel’s lover Grand Duke Dmitri Pavlovich Romanov introduced her to Ernest Beaux on the French Riviera, the master perfumer at A Rallet and Company which was the official perfumer to the Russian royal family. Though Grand Duke and Beaux, Chanel learned about Czarina Alexandra’s favorite scent, made by Rallet, and immediately fell in love with it.

The formula for Czarina’s perfume was lost and Beaux sought to reproduce it and also, under Chanel’s instructions, make it more modern and agreeable for the 1920s youth. He perfected what was to become Chanel No. 5  in late summer and autumn of 1920.

Beaux used the rose and jasmine base of Czarina’s perfume making it cleaner with the help of aldehydes, organic compounds of carbon, oxygen and hydrogen. Aldehydes gave No.5 that clean, winter note Beaux was aiming for ever since World War I when he got stationed far north in Arkhangelsk. The polar landscape and the whiteness of snow sparked his desire to capture that crisp fragrance of arctic landscape in a perfume.

In what is to become Chanel No.5 perfume, Beaux added modern synthetics, including his own invention “Rose E.B” and derivates from a new jasmine source, a commercial ingredient called Jasophore. He also increased the quantities of orris root and natural musk.

Beaux prepared 10 glass vials numbered 1-5 and 20-24, each with a different variation of the compound, and presented them to Coco Chanel. “Number five. Yes, that is what I was waiting for. A perfume like nothing else. A woman’s perfume, with the scent of a woman,” Chanel said.

The number five had potent associations for Chanel. She associated it with her time in a convent orphanage, the abbey gardens, circular patterns repeating the number five she saw on the paths towards the cathedral where she went for daily prayers. For Chanel, five was her lucky number. “I present my dress collections on the fifth of May, the fifth month of the year and so we will let this sample number five keep the name it has already, it will bring good luck,” she told Beaux. 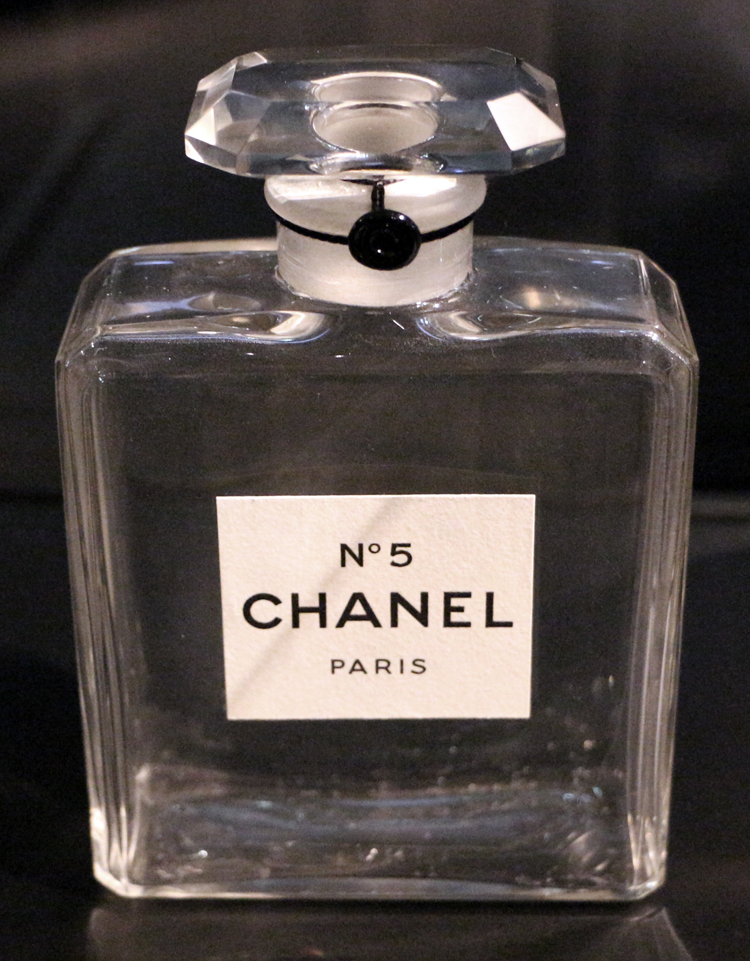 And for her perfume, she wanted a bottle completely different from the over-elaborate crystal bottles used at the time. Her bottle would be “pure transparency …an invisible bottle”. It is believed that she found inspiration in the rectangular lines of the Charvet toiletry bottles favored by her lover Arthur “Boy” Capel. Others say Coco found her inspiration in the whiskey decanter Capel used and Chanel admired.

However, the first bottle produced in 1922 was different from the Chanel No.5 bottle we know today.  The original bottle had delicate rounded shoulders and was sold only to selected clients. When Parfums Chanel opened in 1924, the glass proved too thin to survive shipping and distribution. This led to the modification of the bottle, giving it square, faceted corners.

In 1924 marketing brochure, Parfums Chanel described the bottle as, “the perfection of the product forbids dressing it in the customary artifices. Why rely on the art of the glassmaker…Mademoiselle is proud to present simple bottles adorned only by…precious teardrops of the perfume of incomparable quality, unique in composition, revealing the artistic personality of their creator.”[

The bottle, except a limited, red edition of Chanel No.5 for Christmas 2018, changed very little, mostly the stopper. 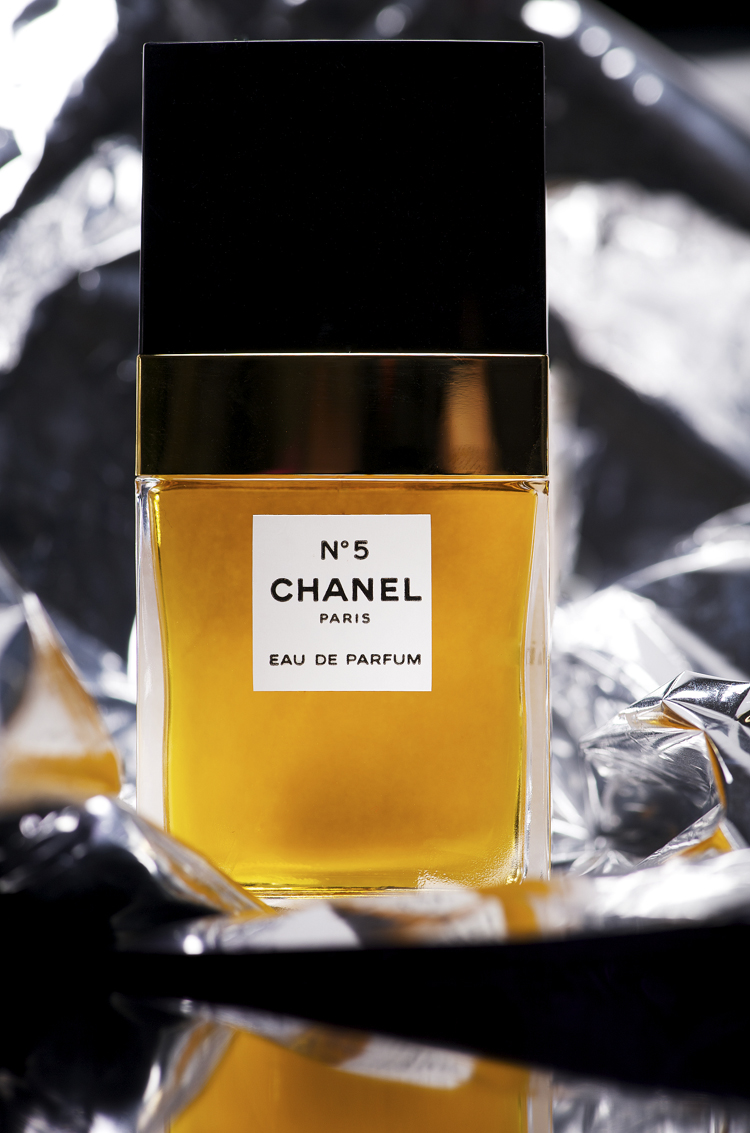 The perfume formula of No.5, however, changed during time. Chanel claims changes were minimal, except for the necessary exclusion of natural civet and certain nitro-musks. Perfume lovers and connoisseurs say that with each decade the scent changed and that Chanel No.5 today is not the same as Chanel No.5 ten years ago.

Nevertheless, the perfume is a favorite of many, from ordinary people to celebrities. When asked what she wears in bed, Marilyn Monroe famously replied “Chanel No. 5.”  Because that clear, simple bottle contains a touch of glamour and the essence of a free-spirited, sexy, intelligent, chic Parisian. It is bottled Paris luxe American soldiers waited in long lines to bring back home at the end of World War II.