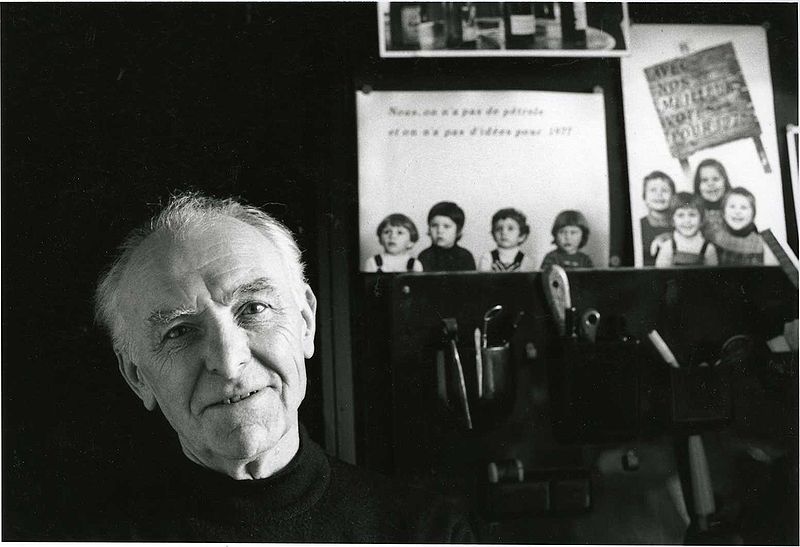 Robert Doisneau – the portraitist of the 20th century Paris

If you ever needed a nice photograph of Paris that does not look just like another postcard, I  am sure that you ended up with a photo of Robert Doisneau. It wouldn’t be unfair to claim that his photos are among the most used ones when it comes to photos that describe the atmosphere of the 20th century Paris. His specialty, that explains his success and popularity still today, was photographing people and actions, using the city as some kind of setting or decoration and making the private and the personal visible and approachable. He describes it very well:
“People like my photos because they see in them what they would see if they stopped rushing about and took the time to enjoy the city.”
The feeling seems kind of familiar, right?

Doisneau’s most famous photo is probably the “Kiss by the Hôtel de Ville” ( “The kiss by the town hall”). It is more or less known that it has been staged, which is not often the case with his photographs. I know that accepting this fact can be hard, mostly because of the romantic teenager hidden somewhere deep inside of us all wanting this photo to be “real”. Nevertheless, the truth is somewhere in between. The photograph was taken in 1950, when it was commissioned by the american Life Magazine on the subject “Lovers in Paris”. Even though the people on the photograph are Doisneau’s friends, the scene is not completely staged – they knew they were photographed, but had no indications on what exactly they should do. The people on the photograph are actors, but it still describes so well the spirit of that time when (at least in our imagination) kisses lasted longer. It is thanks to Doisneau’s great talent and dedication that the moment is captured such as it is.

The photo had some success when it first appeared, but it was just one of the pictures in this series. It is only thirty years after its first appearance, when a young publisher decided to publish it in a poster format, that it has achieved the popularity that it has today. Doisneau, who at first was not so sure about this idea, explained why we all like this photograph so much:
“We all realised that it represented a perfect fantasy. It encapsulates the world’s view of Paris as the city of love and freedom.”

His career started at a quite young age. He got familiar with the arts through a craft school, where he was learning engraving and lithography. He started taking amateur shots at the age of 16, but it wasn’t until he turned 20 that he made his first professional street photography. At this moment, he was hired by an agency to travel throughout France, searching for photo stories, which later became his main preoccupation. Shortly after this he was hired as an industrial photographer in Renault, where he had been working for 5 years, after which he got fired for constantly being late. Luckily for him he was, because only after this event did he concentrate more on his artwork, making his life as a freelance photographer.

Beside street photography, Doisneau is also famous for his portraits of his fellow artist friends such as Pablo Picasso, Salvador Dali, Giacometti, Jacques Prevert… He took portraits of around 75 different artists. Doisneau had access to their studios and their workplace, capturing their most private moments of creation, reflection and joy. If the first image that comes to your mind when hearing Picasso’s name is his grey hair and peaceful and playful face, it is most probably because of Doisneau. He managed to present both Picasso’s character and art, with such ease, in only one photo. On the photograph entitled “Picasso’s bread” he is obviously flirting with the fact that Picasso is earning his bread using his bare hands that Doisneau chooses to hide in the picture.

A part of his work is dedicated to the Second World War, due to his engagement in the army and later in the Resistance. He has also used his engraver skills to forge passports for those in need, who are persecuted or chased for political reasons. Photographing Paris throughout the war, he is one of the few photographers who captured the moments of joy during the Liberation.

Robert Doisneau’s photo archives include approximately 450,000 photographs which he has classified and regrouped so that anyone can understand and curate his work. During his lifetime he has been awarded many times, among all with a Kodak Prize in 1947, a Niepce Prize in 1956 and a Grand Prix National de la Photographie in 1983. He also became a Chevalier of the Order of the Legion of Honour in 1984.

If you got intrigued by Robert Doisneau’s work and would like to hang one of his pictures in your living room, you would have to really think it over, since the price of some of his works reaches up to 15000 dollars and more.

(All images taken from Wikimedia Commons)