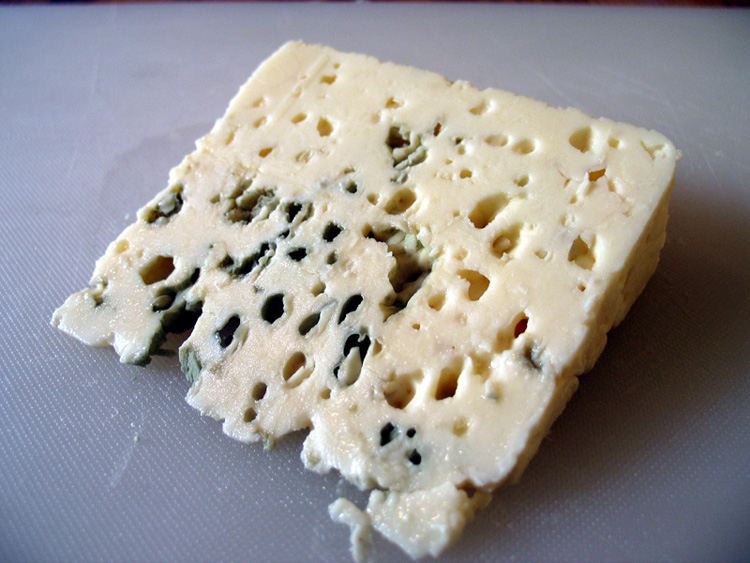 A long, long time ago, a handsome youth was eating his lunch of bread and sheep’s milk cheese in a cave in the south of France when he was a beautiful young girl. Captivated by her beauty and laughter, he ran after her to meet her.

Weeks later, when he returned to the cave, he discovered that the mold had transformer his plain cheese into Roquefort – one of the world’s best known blue cheese.

This is the legend of how this creamy cheese with its blue veins stretching across its moist and crumbly body was created. The cheese is visually reminiscent of the limestone cliff sides of the caves in which it is aged, as Roquefort can only be aged in the Combalou caves of Roquefort-sur-Soulzon in order to be called Roquefort.

Roquefort – France’s first cheese that got Appellation d’Origine Controlee (AOC) – is white with distinctive veins of blue mold (Penicillium roquefort). It has a characteristic odor and flavor due to the presence of butyric acid. The blue veins have a sharp tang. The cheese has no rind and its exterior is slightly salty. It comes in 2.5 to 3 kg rounds which are 10 cm thick and shares the title “the king of cheeses” with Brie. 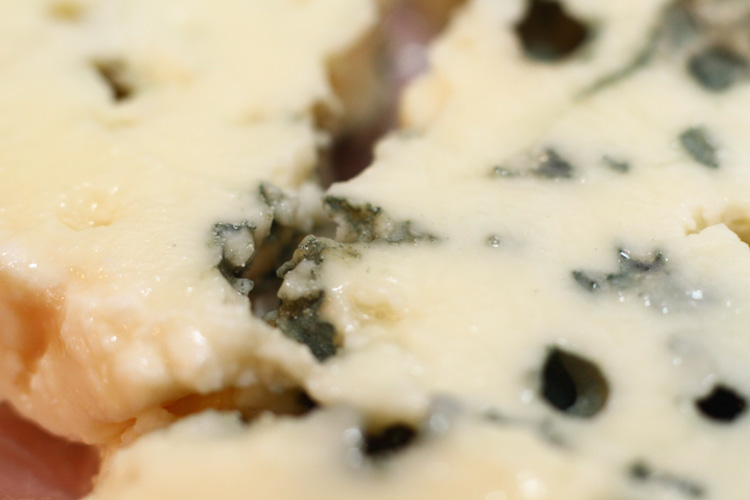 It is often said that Pliny the Elder praised Roquefort in 79AD although he talked about cheese from Gaul without mentioning its origin or whether it was blue. Roquefort is first mentioned in 1070 and at the end of the Middle Ages, its reputation extended to the Mediterranean regions of Toulouse, Marseille, Montpellier.

In the 18th century, French Philosopher Denis Diderot named it the “King of Cheeses”. The cheese became internationally renowned in the 20th century. In 1925 it was granted the AOC label of origin title, a guarantee of quality. In 1951 it received an AOC on an international level.

The mold that gives Roquefort its distinctive taste is found in the soil of the local caves. Traditionally, the people of Roquefort extracted it by leaving bread in the caves for six to eight weeks to become entirely consumed by the mold. The bread was then dried to produce a powder that was mixed with the milk of the Lacaune breed of sheep.

Before it got the AOC mark, a small amount of cow’s milk was added but now the cheese is made entirely of the Lacaune sheep milk. Gazin on pastures in Occitaine, the sheep are known to produce the milk of sturdy character, rounded flavors and high yield. Interesting fact: around 4.5 liters of milk is required to make one kilogram of Roquefort.

The AOC regulations include that all milk used must be delivered at least 20 days after lambing has taken place. The sheep must be on pasture in an area including most of Aveyron and parts of neighboring departments. The milk must be whole and unfiltered and the rennet must be added within 48 hours of milking.

The AOC rule is that the Penicillium roquefort  – that does not excrete penicillin contrary to popular belief – must be produced in the natural caves of Roquefort-sur Soulzon, that dry salt must be used and that the whole process of maturation, cutting, packaging and refrigeration must take place in the commune of Roquefort-sur-Soulzon. 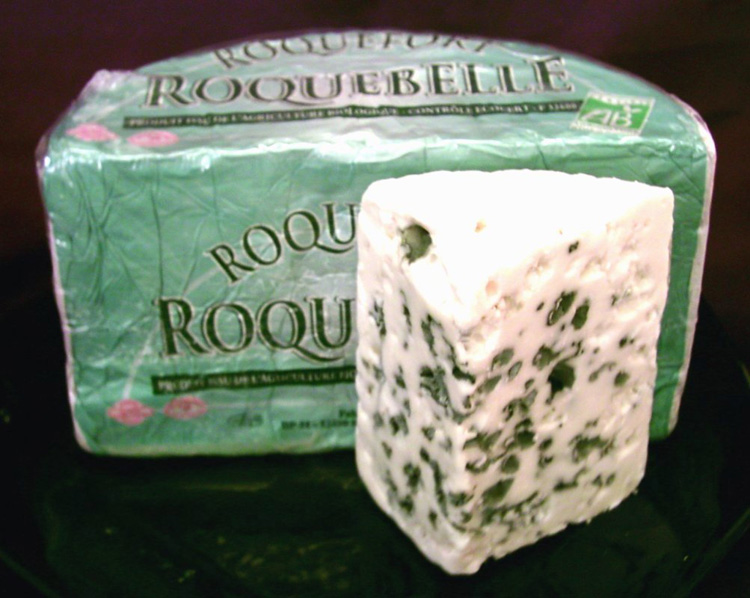 How is Roquefort made? Milk is collected every day and delivered to the creameries, fresh and unpasteurized. There it is heated and poured in closed vats and then blended with a mixture of culture, Penicillium roquefort and rennet triggering the fostering of blue mold.

Once firm, the curd is shaped by molds and left to drain. A generous amount of salt is applied by hand, preventing excessive growth of mold on the rind. The cheese is then pierced with steel needles, allowing the blue veins to develop.

The cheese is aged in the caves in the cliffs overhanging the village of Roquefort, absorbing their moisture and flavors. After 20 days of aging, the cheese is wrapped in foil slowing the development of mold and also softening its texture to that creamy delight. After three months of ripening, the foil is removed and the cheese is ready to be devoured.

Another interesting fact is that due to the presence of anti-inflammatory proteins, shepherds applied the cheese to wounds to avoid gangrene. A 2012 study confirmed that Roquefort contains anti-inflammatory compounds and that eating Roquefort cheese could help guard against cardiovascular disease despite its high fat and salt content.

There are seven Roquefort producers from the department of Aveyron and nearby departments of Aude, Lozere, Gard, Herault and Tarn. The largest producer is Roquefort Societe which holds several caves and its facilities are open to tourists. The RS accounts for around 60% of all production. Roquefort Papillion also has several caves while Carles, Gabriel Coulet, Fromageries occitanes, Verniers and Le Vieux Berger each hold only one cave.

The yummy, salty, delicious Roquefort goes well with honey and zesty apples but is also perfectly in tune with meat. Bordeaux and full-bodied reds from the Languedoc would be a perfect wine choice for Roquefort. Experts say that certain blends of Cabernet Sauvignon and Merlot would also work.