The Angelus by Jean-Francois Millet

The Angelus is probably Jean-Francois Millet’s most famous work and one of the greatest French paintings of the nineteenth century.

Although it was one of the most widely reproduced religious paintings of the 19th century, with prints hanging in thousands of households across the country, The Angelus is more nostalgia than religious, Christian art.

Millet was the son of a farmer and a leading member of the Barbizon school of landscape painting. He was best known for the realism he painted the hard life of French peasants. With The Sower and The Gleaners, The Angelus makes his iconic and probably most famous trio of rural life paintings that more often than not shocked the public, accustomed to “politically correct” representations of country life in lush, pastel colors, golden hues and figures of rich landlords, without a single, poor, ugly peasant in sight.

In 1865, Millet said that the idea for The Angelus was a result of a childhood memory of his grandmother who always insisted that the family stop working in the fields when they hear the church bell calling for Angelus, a prayer traditionally recited three times in Catholic churches, in the morning, at noon and in the evening, commemorating the Annunciation. The “Angelus” stands for “angel” in Latin and is the opening word of the Annunciation “Angelus Domini nuntiavit Mariae” (The Angel of the Lord announced to Mary).

The painting depicts two peasants – a man and a woman – who stopped working in order to recite the Angelus as the bell from the church in the background announce the evening prayer and the end of the day’s work. The man and the woman bowed their heads in silent prayer, he with a beret in his hand, she with her hands folded in prayer. 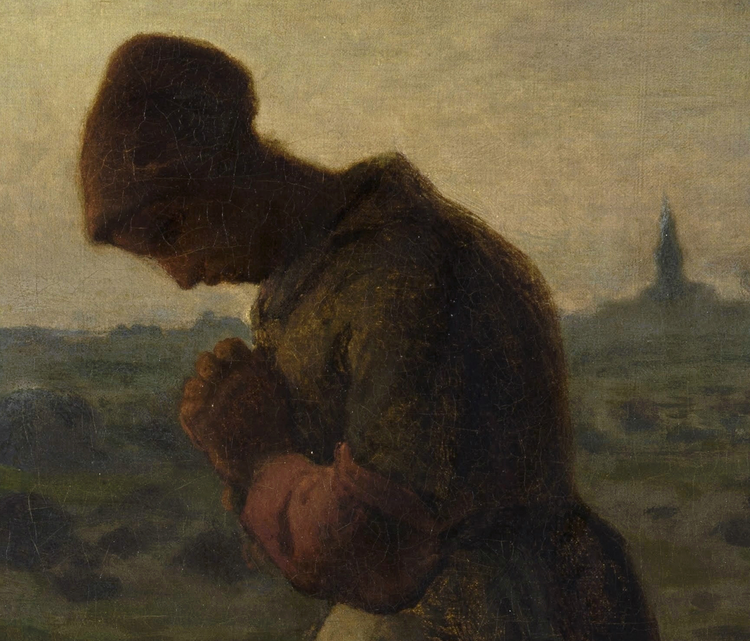 The scene takes place during a potato harvest in Barbizon, outside Chailly-en-Biere whose church is visible in the background. The couple was in the middle of the work, digging potatoes when they head the church bell. All their tools are scattered around them, sacks, pitchfork, a basket of potatoes and a small cart. The sun is setting and in the distance is a church and part of the village visible under the sky that still shows daylight. The relationship between the couple is unclear. Are they husband and wife, colleagues or farmer and maidservant? In the sales catalog from 1889 they are described as “a young peasant and his companion.”

Millet presented the harsh, backbreaking life of French peasants with these two silent and anonymous figures with bowed shoulders suggesting a life full of hard work, dressed in worn, rough clothes and wrapped in the gathering dusk shadows that suggest their struggle as do a few simple tools scattered around them, the tools that helps them scratch a living.

The composition of the painting is very Millet-like, the main subject is in the foreground while the secondary features are in the far background with little else in between. Such composition combined with atmospheric perspective and diminution of figures resembles the Italian Renaissance works but the horizontal, almost stage-like arrangement of figures (Renaissance artists were known for their pyramidal figure arrangement) is a bow to Neoclassical artists such as Jacques-Louis David.

There is no religious message to the painting, nor there a political one, despite some trying to present it as a political statement of socialist solidarity with the workers. Milled simply portrayed a childhood memory, a moment of meditation in the field.

The painting was commissioned by Thomas Gold Appleton, an American passing through Paris, but he never returned to collect it. Millet then changed the title of the work, originally called Prayer for the Potato crop and added a church tower. It passed through numerous hands before it was donated to the State by Alfred Chauchard in 1906. At one point it was in the collection of Belgian minister Van Praet who exchanged it for another Millet’s work “Sheperd and his flock”. When asked to explain why he said: “What can I say? It is clearly a masterpiece, but faced with these two peasants, whose work is interrupted by prayer, everyone thinks they can hear the nearby church bell tolling, and in the end, the constant ringing just became tiresome”.

This particular work influenced Vincent van Gogh’s to make his The Potato Eaters in 1885, but more importantly, it was a painting Spanish Surrealist Salvador Dali admired so much it became some kind of artistic obsession for him. During the 1930s he recreated the scene many times and even wrote a book entitled “The Tragic Myth of The Angelus of Millet.” Dali argued that the couple was actually praying over their buried child and that the painting contained a message of repressed sexual aggression.

In 1963, Louvre x-rayed the canvas revealing a geometric shape similar to a small coffin in the place of the basket of potatoes. The analysts also discovered that the church tower was added later. It seems that Dali was vindicated and that Millet originally painted a burial and then converted it to a recitation of the Angelus.