The Gleaners by Jean-Francois Millet

If you have time for just one painting to see while visiting Paris, The Gleaners (1857) by Jean-Francois Millet that resides in the Musee d’Orsay might be a good choice. And not because it is the prettiest or the happiest or the brightest painting in the world, nor the most famous one. No, The Gleaners (Des Glaneuses) is an important painting in art history as it introduced new presences in art (hard life of the poor) and influenced younger artists such as Van Gogh, Renoir, Seurat or Pissarro. But it is also a painting that will take your breath away.

The painting is a culmination of ten years of research of one of Millet’s favorite subjects – peasant life and was preceded by a vertical painting of the image and an etching. Along with The Sower and The Angelus, it is part of Millet’s iconic trio. Millet was one of the founders of the so-called Barbizon school in rural France and was famous for his realistic art and scenes of peasant farmers. As the son of a farmer, he was familiar with farmer’s work and used the motives of that life in his art.

The Gleaners is a powerful social criticism and a chilling reminder to the upper and middle classes that following the French revolution of 1848, their society was built upon the labor of the working masses, the masses that greatly outnumbered the members of the upper class. 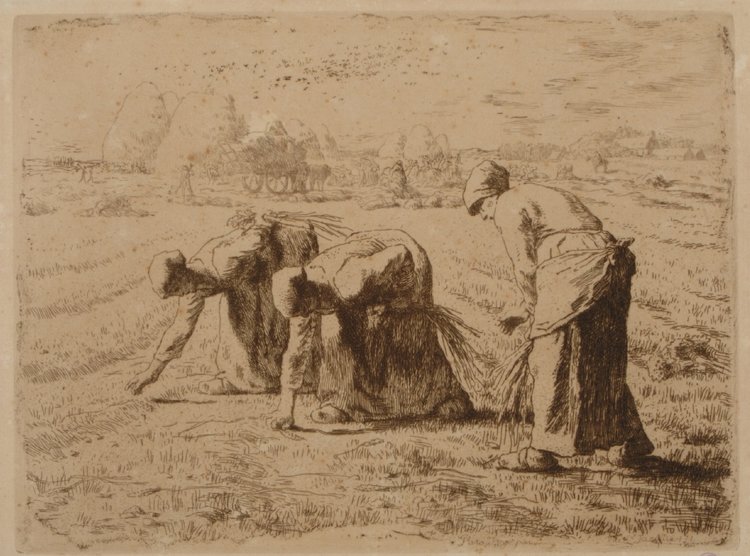 When Millet unveiled The Gleaners at the Salon in 1857 it drew negative criticism because of the topic, but also the size and the realistic presentation of poverty and the working class. The canvas with its 84 by 112 centimeters (33×44 inches) is huge, too huge for a painting that depicts something so no-no as hard, manual labor. The canvas of that size was reserved for religious or mythological paintings. Although Mille illustrated poor women working in the field, they have an air of something Biblical, even royal about them with their quiet fortitude and robust figures.

In Millet’s day, French farmer respected the centuries-old rule and left scraps of the grain harvest in the fields so that the poor women and children could pick them up at the end of the day and live off them. Millet was drawn to this theme and found it to be an eternal, almost sacred. Three peasant women are here depicted gathering grains as the sun sets at the end of a harvest day. The evening is falling and in the distance, the viewer can depict a cart full of wheat, haystacks, a man on horseback – overseer most likely, and many laborers who are painted to show the abundance of the harvest – a stark contrast to the poverty of the women who are picking up leftovers and scraps.

Three gleaners each depict a specific task of this hard, monotone and essentially fruitless work – one searches the ground for stray grain, the second collects the grains that glister against the dull color of the ground. There is hardly any left, a chilling contrast to the abundance of the harvest in the background. The third woman ties the grains together. The clothes the women wear are simple and rough, the work is backbreaking, the pickings are scarce and the faces of the women are hidden in the shadows. They are meant to be that way as they represent all the poor peasants in the country.

The three figures are in contrast with the rich and lush background, with the steward on horseback, haystacks, cart, and harvesters. The light falls on women’s hands, necks, shoulders, and backs accentuating the repetitive movement and the jewel-like color of the leftover grains. The rich background is smudged into a golden haze as a contrast to the shadowy figures in the foreground, with the man on horseback as a reminder of the rich landlord who allowed the gleaners to collect the harvest remains.

The fact that Millet dared to be ironical and depict rural poverty as a Biblical theme but without any sense of compassion and love the Bible preaches, shocked and repelled the public. After the Salon, Millet sold it for a miserable price of 3,000 francs to an Englishman named Binder. After Millet’s death, banker Ferdinand Bischoffsheim, who was the owner of the painting then, sold it for 300,000 francs at auction in 1889 to Champagne producer Jeanne-Alexandrine Louise Pommery. Pommery in her will stated that the painting should be donated to the Louvre and that happened in 1891. Now, the painting resides in Musée d’Orsay along with works of French artists from 1848 to 1914.