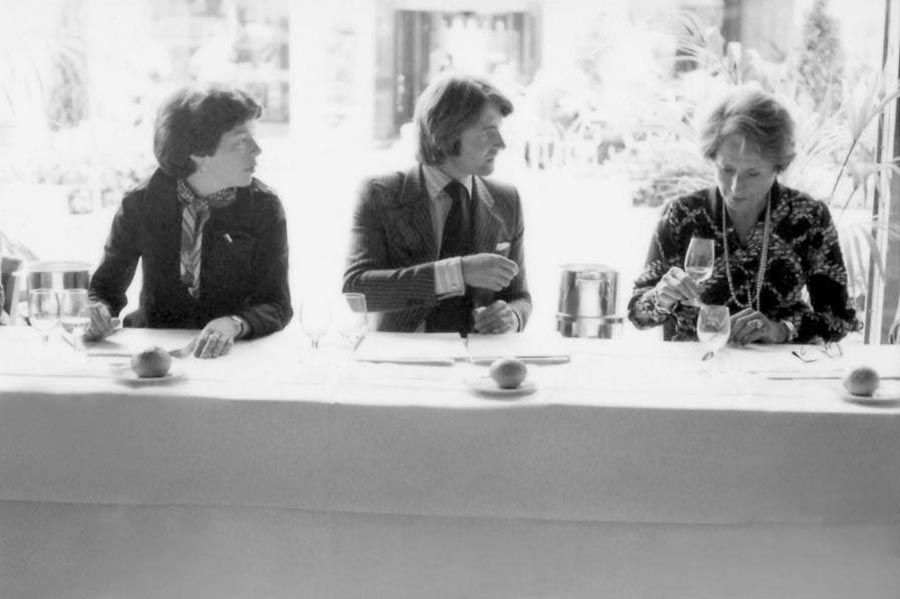 The Judgment of Paris vol.II – Wine

In a previous post we announced that it is actually a prequel of a story, setting the context for another narrative that will ensue. The Judgment of Paris in visual arts speak of all of the dangers of the aesthetic judgment and its unforeseen outcome – an action that presents very high chances of falling into hybris. The destiny’s call (as we named it) can be, and often is, a considerable shift of tide that is to come, presented in the loveliest package one can image. All of this was needed to set the stage for another judgment of Paris, this time set in the world of fine wines.

As you can imagine, this story continues where the previously ended. The (Dangerous and unsettling) Beauty can exist outside the realm of the visual – this time around, the stage is of equally sensual, yet different nature – it is about the sommet of the art of gourmandise, very much lauded and notorious wine. To be more precise and less poetic, it is about that first time when a blind test was organized between the five (until then) American unknowns, and the five French famous and renowned wines to determine which are better. This year is the 40th anniversary of that historic event that placed the American wines and the Napa valley on the map of fine wines.  So here’s what’s happened in greater detail.

In 1976, America was celebrating the Bicentennial of its existence. As you probably already know (or can hear in greater detail upon visiting our All Inclusive or Saint Germain tours), the American and the French history are closely tied together, as the French take great pride in having helped the Americans succeed in their revolution and having helped them to set the foundations of their state. So the French were implied in this celebration as it concerned them also, not in a marginal fashion. This celebration was used by a crafty and curious English wine merchant, Steven Spurrier, who had recently taken an interest in Californian wines and felt that they have a great potential that needed be further explored. So he organized a blind tasting where the top French wines of the two famous French regions, Bordeaux and Burgundy, would be placed against the Californian wines from the Napa valley. To give the tasting the necessary “weight” and credibility, he called upon the top French wine tasters, of irreproachable professional credentials . In the alphabetical order, they were :

In this list you can see some impressive names and credentials: the sommelier of the La Tour de l’Argent (the famous Parisian restaurant, known as the best one in the country, also one of the oldest); the sommelier of the fabled Burgundian domain of Romanée-Conti, etc. All efforts were made to make the tasting as objective as possible. The judges did a blind tasting, and the order of wines was known only by the organizer, Steven Spurrier, and a single journalist present. Also, all of the judges (except for Patricia Gallagher) were themselves French. As is the case in all of France’s notation, the wine was to be scored on a scale from 1 to 20. The results would from different judges would be added to give a final score. 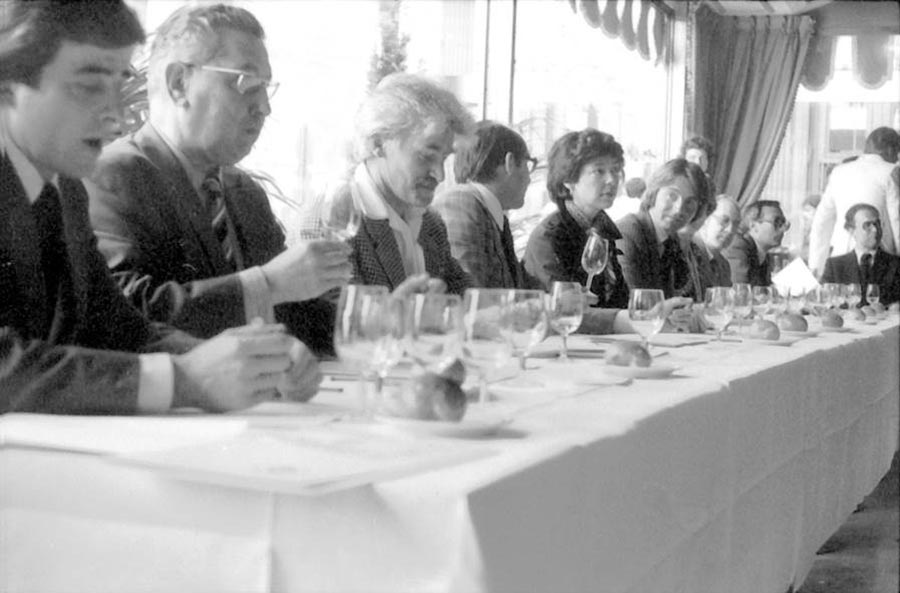 The Judges. Photo taken from www.npr.org

The event didn’t receive much attention from the press as everyone thought that it was a rather pointless exhibition and a basic no-news. The French wines had top-notch quality, hundreds of years of experienced practice and tradition, as well as notoriety on their side. The American wines had little competition to offer against that. So as an outcome, only one journalist came, the correspondent of the Times magazine in France, George Taber. He came not expecting to have something worthwhile to write about, but rather as a favor to the organizers. It would turn out that it was the most important decision he made in his entire carrier.

As the competition went on, he had the occasion of looking at the list of wines being tasted, and comparing it to the reaction of the judges. He had an opportunity to see a judge tasting a wine and acclaiming that it was the excellent and well known taste of a French white – except that, unbeknownst to him,  it wasn’t. It was a Californian Chardonnay. It was then that George Taber’s journalistic instincts kicked in and he started seeing that something was going on – he was onto a major story.

The still unsuspecting judges in the middle of the tasting. Photo taken from www.npr.org

As you can probably already guess, the results were a shock to everyone – the American wines won. Even though the France had its best Grand Cru classé of 1st and 2nd order, they lost the top placement to Californian wines both in the category of the red and the white. The winning wines were the 1973 chardonnay from Chateau Montelena and the 1973 cabernet sauvignon from Stag’s Leap Wine Cellars. Both bottles are now preserved in the Smithsonian’s National Museum of American History. The judges themselves were shocked – to that extent even, that the Odette Khan demanded her ballot to be deleted and pulled from the poll. She realized the implication this would have on the wine world and wanted to make sure that her name wasn’t there. But it was too late. 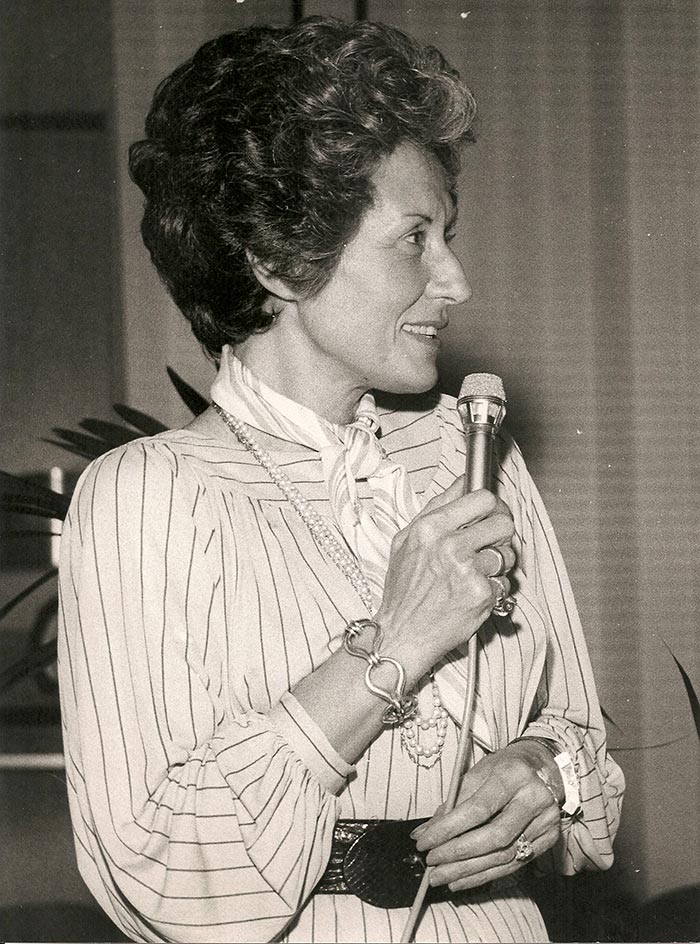 This event would, indeed, change the wine world. It was big news, that shook the wine world and left everyone in disbelief. Not only that the American wines won over the French, the judgment was made by the top French tasters. It could not get more objective than that – if we can talk about objectivity in the domain of tasting at all, but that is another story. This event would go on to do many things. First, it places the Napa Valley and California on the map as the respectable wine producers that could compete against the best, and win – on their terrain, by their judges. Second, it showed that you can have the soil, the savoir-faire, the tradition, the prestige etc. on your side – and still lose to a modest newcomer. Third, it opened the possibility of wines from many different places – Australia, Argentina, Chile etc. to be taken seriously – the world of fine wine spread from France, Italy (and partially Germany) to basically the entire planet. The horizon broadened considerably. It gave a huge boost of self confidence to all the wine producers from all over the world – everyone started believing that they too can produce a wine that can knock the crown off of a famous Premier Grand Cru classé en 1855 – a simple string of words that was an insurmountable mountain to any competition. No more – the mountain was conquered.

Being poor losers and general sticklers, many of the judges complained that even though the American wines won, the French wines would be the ultimate winners as they would age better.  So in honor of this historic event, the tastings were repeated in 1978, 1986 and 30 years after the initial tasting, in 2006. Again, they were blind and in a secret order. In all three additional tastings, American wines won with even better scores. So the initial victory was confirmed, filed and archived – it was beyond a doubt and reproach. Their hybris, much like Paris’ back in the day, was in thinking that the French wine of Bordeaux and Burgundy region cannot have a competition. Much like the mythical Trojan prince Paris, they were chosen for their honesty; much like him, they found themselves in an event that turned out to be overwhelming ; much like him, they didn’t really realise what was actually going on and there was nothing they could do about it.

While it was a huge motivation for the rest of the world, it was not such good news for the French wine producers. All of a sudden, they started having competition all over the world. Their reputation was shaken – suddenly, the idea dawned on people that you can find supreme pleasure and aesthetic quality in a bottle of wine that does not cost like a studio apartment in Paris (or a house elsewhere) – you can find a better wine from America that you can actually afford. But ultimately, it was good news for them as well, as they stopped sleeping on their laurels. The world of wine lovers was the real victor, as the wines all over the world got better, and the wines from France also got better. This judgment of Paris, unlike the previous, had a happy ending, where the only thing that god (in all honesty, temporary) bruised was some wine related pride and vanity. Which is always a good thing.

What would the next “judgment of Paris” be ? Will there be a Vol.III ? Stay tuned if you wish to find out :). Also, if you’re interested in a wine tasting done by our enthusiastic and experienced team, let us know and we’ll make it happen. Santé !