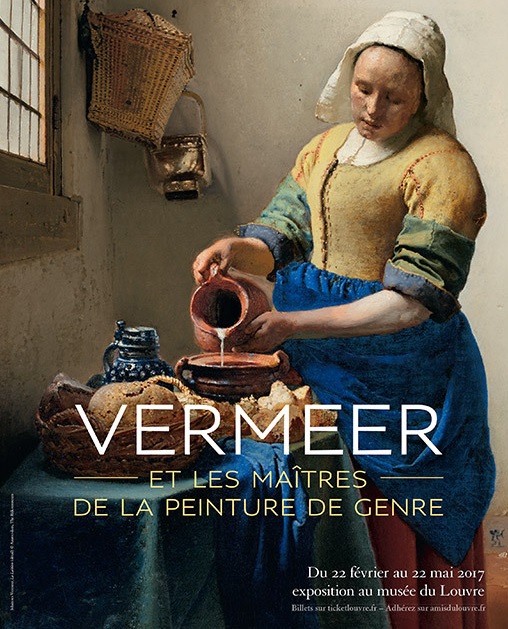 Vermeer and the masters of the genre painting in the Louvre

So the talk of the town it the exhibition of Vermeer and the masters of the genre painting, to be more precise Dutch paintings of the 17th century. The exhibition was marketed like it’s the end of days ; when it started, all the papers brought news of record shattering visits, incredible interest it generated, the event of the year no less. 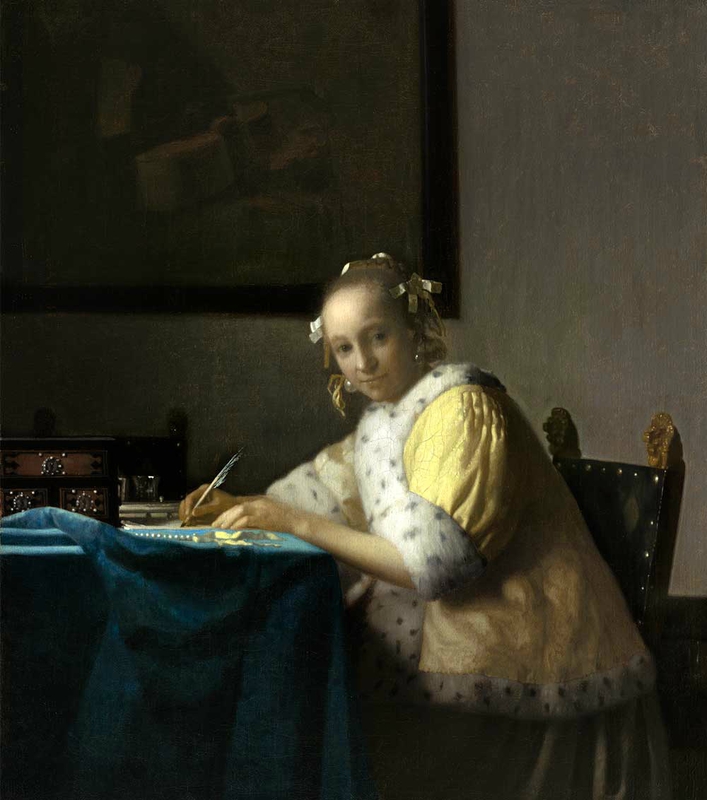 Naturally we took the bait, had to inspect it so we went there as soon as it was possible – they told we need to come back because that day was booked solid. Even as a journalist you have to book for a specific time slot. OK, take two, there we were again, with our time slot booked. Lines indeed are humbling, and are made as if are meant to break your spirit. First you wait in one line and when that one is done, you go around the corner just to see that there is in fact another one, and then that happens again. Not fun, actually quite devastating. 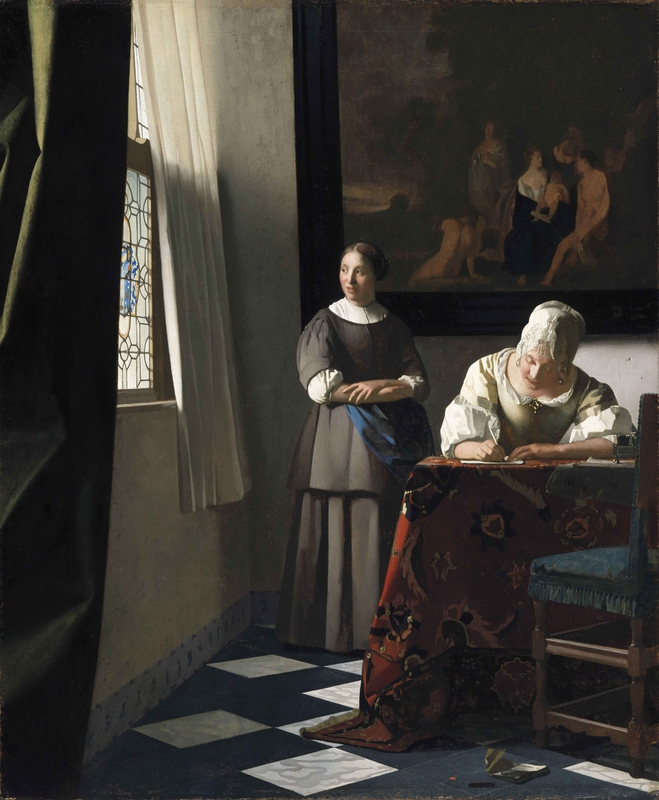 So while you do feel the buzz of the crowd waiting, everyone around you being super excited about the greatest exhibition ever made (as that’s how it’s marketed) you start growing suspicious on two accounts. First, it’s set in the entry floor of the Louvre, which is in fact the basement. How big of a space can it be ? Second, the title says Vermeer in massive letters and then the masters of the genre painting in suspiciously smaller ones. As we have the habit of reading between the lines, this got us thinking. 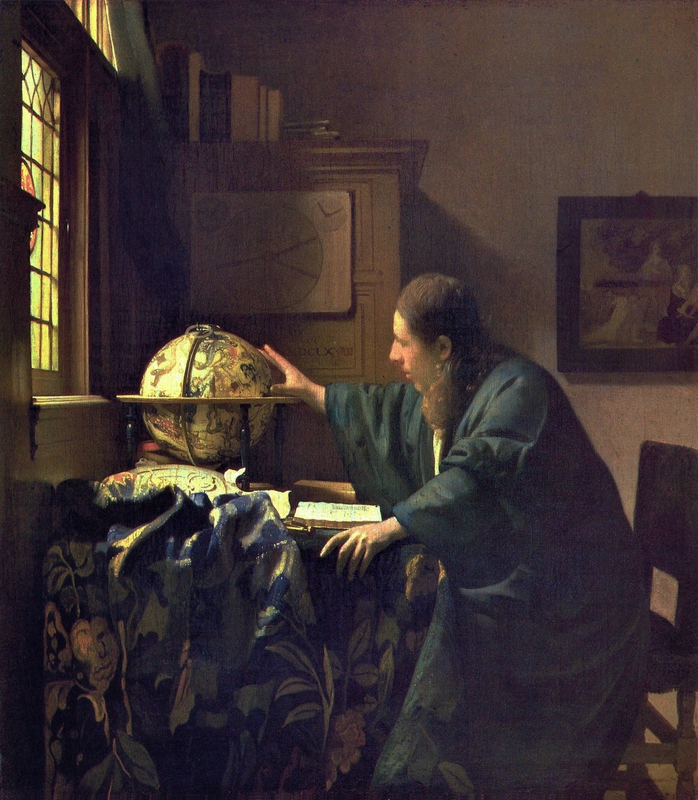 And then FINALLY after having waited for roughly two hours, we get to enter into a small, quite crowded, rather poorly lit room. And then it hit us – this is not at all about Vermeer. Anxious from waiting and understanding the trick that was played, we boiled over with protest.

Quite literally, this is us in the middle of the exhibition. Similar clothes too. 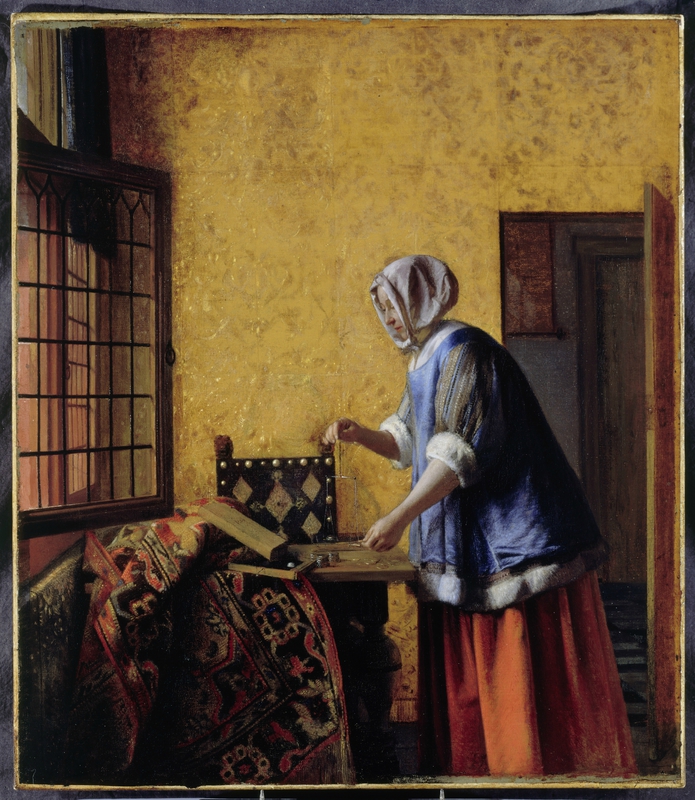 So as suspected, the joke was that the event is advertised as the greatest Vermeer exhibition ever, followed by an arte channel documentary about Vermeer, a monographies and studies about the artist, and this happening as the crown in the jewel. Well, not quite. The first section discovers the joke – you see one Vermeer painting, and then around it, five or six other paintings done in a similar fashion, on the same theme, by his contemporaries. So you get to understand that you won’t be looking at a lot of Vermeer, and not exactly at his stellar work neither. Some key pieces were absent, whereas some well known ones (already in the possession of the Louvre, btw) were there. Damn you Louvre, that’s a dirty trick ! It should be beneath you !

Plus the exhibition is super small. I mean c’mon Louvre, how can this be ‘the event of the year’ if it’s set in the basement and features around 50 paintings altogether ? Out of which more than half are already the property of the Louvre ? The biggest prank pulled on all the people who bought tickets and stood in line is that all in all, no more than 10 Vermeer paintings are on display. To make matters worse, more than half of the event is made out of Gerard Ter Borch paintings. It just so happens that some of us here at Paris in person have a soft spot for this painter, as it is indeed one of our favorites. That include, but also that aside, it is unfair to make an exhibition where more than half of the work would be of one artist (Ter Borch) yet the advertisement will heavily lean on Vermeer, underrepresented, just because he is a more well known name. Not at all fair to Ter Borch.

We still love you Ter Borch !

So, after having vented that frustration out, what is this (mini) exhibition actually like ? Well, beside the hype, the long lines and the size issues, the paintings represented are great and it is thematically very unified. We get to see a great and poignant depiction of the main Dutch ideology, an society organized around protestantism and mercantile capitalism in its full splendor. This means adoration of work, education, knowledge and science, simplicity of life yet insistence on wealth and luxury. These paintings capture the curious dichotomy between very modest houses, almost entirely deprived of decor (typically barren walls) on one side and the luxurious dresses and jewelry on the other. The religion of protestantism and ideology of capitalism are closely knit together. And while the protestant ethics are about staying modest while sitting on an ever growing pile of money, we get to see people indulging in little luxuries, like playing instruments, having exotic birds, elaborate jewels and fine clothes. The moment captured is that of the very early stages of the decadence slowly starting to enter the laborious society of the 17th century Holland.

Still the work remains important. This is specially visible in the setting up of the two main paintings of the exhibition, The Maid pouring the milk and The Girl making laces. The first is the hearty, simple and robust servant ; the latter is a wealthy girl pursuing her hobby. She is dressed in luxurious clothes, so it’s obvious that her work is that of leisure and fun, not of necessity; much unlike the servant’s. While the nobility and the wealthy of England, France, Russia and other European countries of that time despised work as something that is reserved for the socially disadvantaged, here we see the well to do people doing it as well, even when they don’t have to. A curious dichotomy indeed. 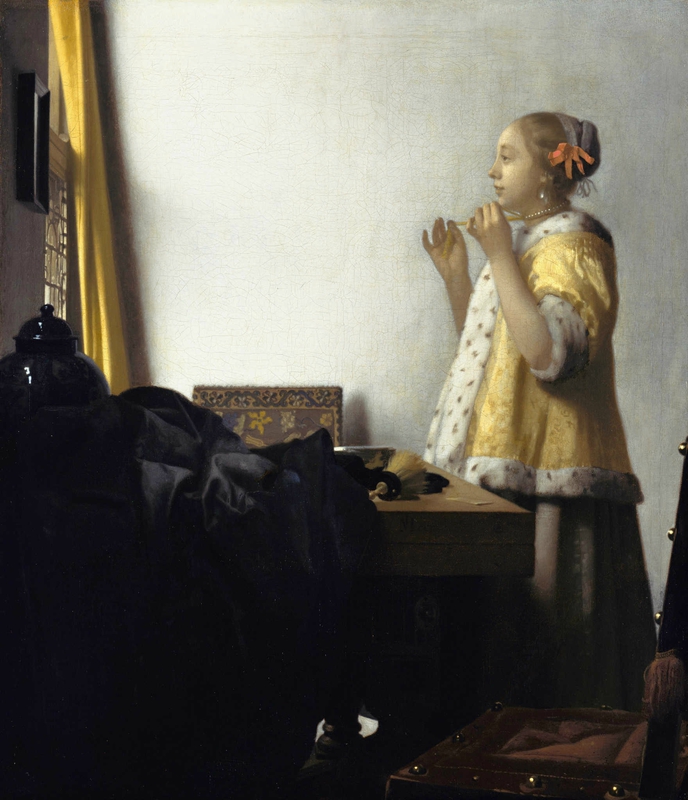 Finally, do we recommend this venue ? It is really hard to say. On one end, Louvre doesn’t quite deserve the visit on account of the cruel prank it pulled – you should probably wait for the exhibition to be over, so that you can just see most of these as a part of a regular collection that is usually on display in the Dutch section of the museum. If you don’t mind being played by ads, long waiting lines, and a stuffy little space where they placed it, there are actually great paintings that are well grouped to be seen here. So you decide.