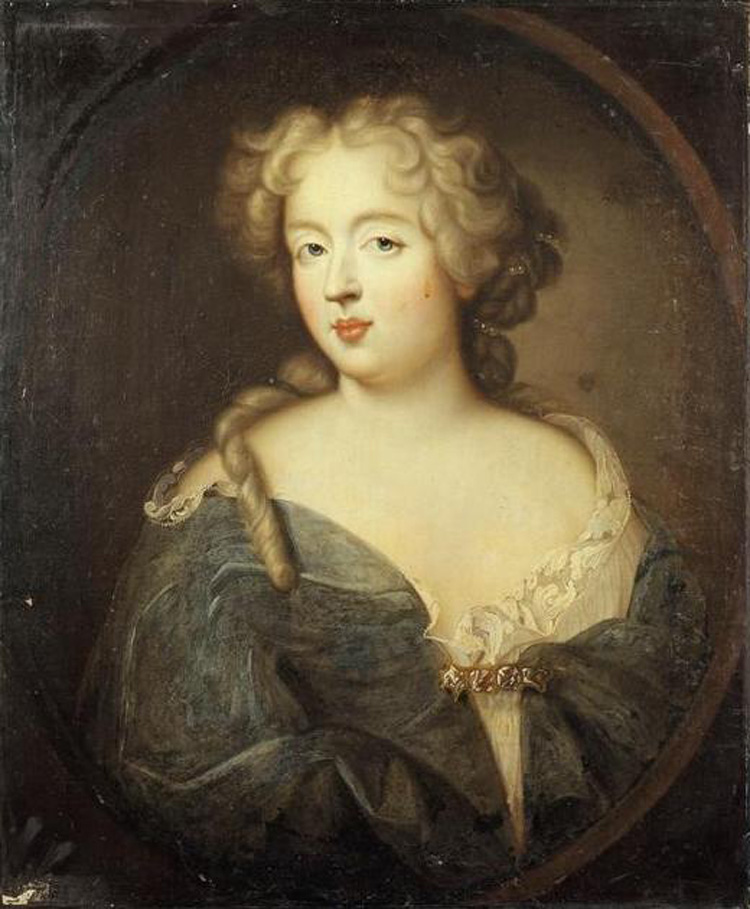 With her wit, charm, astonishing beauty and ambition Francoise-Athenais de Rochechouart, better known as Madame de Montespan for years ruled the court of King Louis XIV of France as his maitresse-en-titre (chief mistress). She was expensive and glorious and beautiful, like the Palace of Versailles she helped turn into the busy center of the royal court. A true Queen of France until her fall in the so-called Affaire des Poisons that tainted her reputation permanently and ended her reign.

Francoise-Athenais, who would later adopt the name Athenais, was born in 1640 in Lussac. She was the third child of the Duke and Duchesse de Mortemart, one of France’s most noble families. Her father Gabriel de Rochechouart, was the Duke of Mortemart and  Prince of Tonnay-Charente, while her mother Diane de Grandseigne, was a lady-in-waiting to Anne of Austria, Queen consort of France.

From her father, Athenais inherited the famous Mortemart wit (esprit) which she used considerably – often to mock others, but also to seduce and char all around her. As a young girl, she traveled to court as in the company of her mother, literally growing up among the intrigues of royal politics. At 12 she began her formal education at the Convent of St Mary at Saintes. The years in the convent left her very religious despite her later scandalous lifestyle.

Athenais was presented at court at the age of 20 and became a maid-of-honor to the king’s sister in law, Princess Henrietta Anne of England and then, thanks to the relationship between her mother and Anne of Austria, she was appointed to be a lady in waiting to the king’s wife Maria Theresa of Spain.

An accomplished dancer, Athenais quickly made her name performing in a ballet with the 22-year-old King and was acknowledged both as a great beauty and a young lady of wit and intelligence.

In her early days in Paris, she frequented intellectual salons and befriended a young widow Francoise Scarron who would later become a governess to Athenais and King’s children and later, Marquise de Maintenon – the second wife of King Louis XIV.

After two years in court, Athenais fell in love and got engaged to a nobleman Louis-Alexandre de La Tremoile. The marriage did not take place as Louis-Alexandre got involved in an illegal duel and killed a young man, after which he was forced to flee France.

Athenais then got engaged with the dead nobleman’s brother, the Marquis de Montespan and in 1663,  she married Louis Henri de Pardaillan de Gondrin, Marquis de Montespan. The pair wed in a chapel at the Eglise Saint-Eustache in Paris and reportedly forgot to bring the proper kneeling cushions for the ceremony so they had to kneel on dog cushions.

Anyway, soon after the wedding, Francoise-Athenais became pregnant and two weeks after giving birth to a girl, she was back in court where she danced in a court ballet. Less than a year later, Athenais gave birth to her second child.

The Montespan family lived close to Louvre and with her large, blue eyes, long, thick, corn-colored, curly hair and a curvaceous, voluptuous body, Madame de Montespan established herself as the reigning beauty of the court. Thanks to her beauty, culture, ability to hold witty, amusing conversations, but also her knowledge of political events, she charmed everyone, from literary figures such as Madame de Sevigne and Saint-Simon to Count de Frontenac and Marquis de La Fare.

Her marriage was rocky from the start. She needed large amounts of money to keep up appearances at court but her husband was a gambler. Ambitious and smart, Athenais turned her eyes elsewhere.

At the time, King’s long-term mistress was Louise de la Valliere and the status of King’s mistress brought status for both the favorite and her family. Beautiful and ambitious, Athenais decided to become Louis XIV’s mistress. She became a close friend with La Valliere and also became close to Dauphin, using his affection for her.

La Valliere underestimated Montespan. She knew Athenais was after her spot but was too sure in her rule over king’s heart she did little to get rid of her rival. Montespan used the pregnancy of both Queen Maria Teresa and La Valliere and snatched the king for herself. Since she was friends with both the queen and the mistress, she was asked to help them entertain the King during private dinners, a task she did impeccably.

Rumors have it that Athenais seduced the King by dropping her towel when she saw Louis spying on her while she showered. Soon after, La Valliere fell to second place and Montespan rose to the first.

The King further humiliated his former mistress when he placed the ladies in connected rooms so he could have access to both, or more often just pass through La Valliere’s chambers to enter Montespan’s.

The reason for this might not only be the King’s cruelty. It was one thing for a married man and a King to take a young girl as his mistress but double adultery, when both parties are married was frowned upon by the society and the Catholic Church.

Marquis de Montespan also did not like this arrangement. He told his friend and anyone who listened that he plans to sleep with prostitutes in order to catch syphilis and then rape his wife in order to pass the disease on to the King. The King was not amused and soon after, Montespan was arrested and forced to retire to his property in Gascony where he hung horns at his gates. Madame de Montespan had seven children with the King and their upbringing was entrusted to one of her friend, Madame Scarron. The King legitimated three living illegitimate children in 1673 and they were given the royal surname de Bourbon. However, Athenais’ name was not mentioned in the legitimatization documents as she was still married to her husband and he could legally claim the children as his own.

The Montespan’s officially separated in 1976. To “memorialize” the death of their marriage, Louis Henri allegedly held a mock-funeral for his ex-wife with mourning carriage adorned with huge horns.

Despite the objection of the Church, the King and Athenais continued their relationship which resulted in two more children both legitimized in 1681.  Her children would go on themselves to found royal houses in Spain, Italy, Bulgaria, and Portugal.

By now, Madame de Montespan was the true Queen of France. She and the King appeared to be the perfect match in wit, beauty and creativity. They both liked ballet and theatre and loved to perform and support artists.

During the hey-day of their affair, Versailles became the center of Louis’ court and Athenais was involved in the design of the buildings, fountains and gardens of the estate. The pair filled Versailles with playwrights and poets, paintings and sculptures.

Athenais introduces new fashions  – including cooking, gardening and gambling. She was extravagant and demanding but had enough charm and wit to get what she wanted. She “became the epicenter of the court, its pleasures and its fortunes, a source of both hope and terror for ministers and generals,” as Saint-Simon put it in his Memoirs.

A great lover of both luxury and the arts, she covered the walls of her 20-rooms suite (which was bigger than the Queen’s who had only 11 rooms) with paintings and transformed her apartments into the court’s “witty heart.” She afforded her protection to illustrious artists such as Moliere, Racine, La Fontaine and Philippe Quinault.

Her apartments were filled with pet animals and flowers. She was showered with costly jewels and is known to be highly discriminating as regards to the quality of the gems and returning them if they did not meet her standards.

At court, women copied her lavish style of dress which was often loose and unfettered which allowed her to move more easily during her pregnancies. Even Queen Marie-Therese tried, unsuccessfully, to attract the King by copying Madam de Montespan’s hairstyle. Even after she left the court, Madame de Montespan’s fashions were still copied.

The King had given Madame de Montespan the Chateau de Clagny, a beautiful palace which looked like a smaller version of Versailles and which was famous for its gallery. The King also had a pleasure pavilion called the Trianon de porcelaine built for her, surrounded by gardens. Clagny was demolished in 1769 and Porcelain pavilion, fragile because of the porcelain tiles used in its construction, was demolished in 1687 and replaced with Grand Trianon of pink marble.

Because of her extravagant tastes in food, fashion and flowers, Athenais was given the nickname Quanto (Italian for “how much”). However witty and beautiful Athenais was, maintaining the attention of the King through seven pregnancies was not an easy task. The King had other mistresses which infuriated temperamental Athenais who for years faced all challengers but in 1678 Louis became smitten with beautiful young Angelique de Fontanges.

A year before, a major scandal erupted. A large ring of witches, fortune tellers, magicians, alchemists and renegade priests was exposed and hundreds arrested in the so-called  Affaire de Poisons.  The accusations that high ranking courtiers and ladies were buying poison to rid themselves of tiresome husbands or were buying aphrodisiacs and participating in black masses to attract new lovers began circling.

When Louis’ mistress Angelique died after a miscarriage, rumors started that Athenais poisoned her. Several high profile prisoners told the chief judge of the court and Paris’ first Lieutenant General of Police Gabriel Nicolas de la Reynie that Madame de Montespan for years used the services of the witch Catherine Monvoisin, known as La Voisin whom she met in 1665.

The two reportedly carried out rituals to create a special love potion for the King. The witch and Madame de Montespan reportedly would call on the devil and sacrifice a newborn child, draining blood and mashing bones into a potion they gave to Louis for years until the witch was captured. Reportedly, in La Voisin’s garden police found remains of 2500 infants.

It was also said that Madame de Montespan participated in a black mass and infant sacrifice, all so she could seduce the king which she managed in 1667 when she became his new mistress.

Even though there was no evidence to support these charges and the affair was hushed up to prevent a further scandal, Madame de Montespan’s days in court were over. She was promoted to the post of Superintendent to the Queen’s household which was a high honor but also a position Louis offered to discarded mistresses.

The King’s heart already turned to the governess of his and Athenais’ children – Madame de Maintenon and in 1691 in a fit of temper, Montespan asked for permission to retire to the Filles de Saint-Joseph convent. Before she could change her mind, her apartments at Versailles were re-allocated.

Montespan’s family profited from her departure – her father was made governor of Paris and her brother a marshal of France. One of her sisters Gabrielle was appointed abbess of the wealthy Fontevraud Abbey although she took her woes only six years prior. Rumors are that Gabrielle was even more beautiful than Athenais and that the King wanted her and frequently invited her to court, but that she kept turning him down.

Madame de Montespan tried to atone her sins in her year-long retirement, donating vast sums of money to hospitals and charities. She died in 1707.