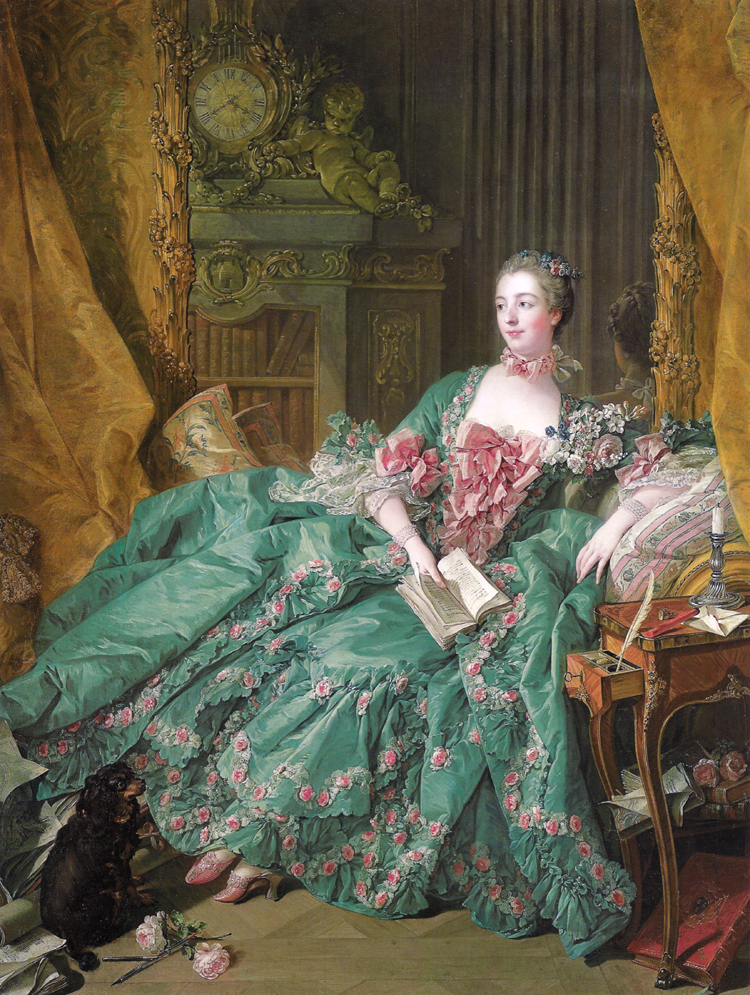 Madame de Pompadour was one of the most famous mistresses in France and her influence in fashion, art and politics cemented her reputation as one of the most influential women of French history. Thanks to her, Paris became the capital of culture in Europe.

Madame de Pompadour was born Jeanne Antoinette Poisson in 1721 to Francois Poisson and Madeleine de La Motte. Rumors have it that her biological father was, in fact, the tax collector Le Normant de Tournehem who would later become her and her brother Abel Francois’s legal guardian after their father Poisson was forced to leave the country due to a scandal over unpaid debts which was a crime punishable by death at the time.

When Jeanne Antoinette was a young girl, her mother took her to a fortune-teller Madame de Lebon who allegedly foretold that the girl “would one day reign over the heart of a king.”

Her mother took the prophecy seriously and sent her daughter who was an uncommonly pretty child to the Ursuline convent in Poissy where she received a good education and was admired for her wit and charm.

Due to poor health, most likely whooping cough, young Jeanne Antoinette returned home at the age of nine where Tourenhem arranged for her to receive the best private education.

“Reinette” (little queen) as Jeanne Antoinette was called, was being groomed to become the mistress of Louis XV and was taught dancing, drawing, painting, engraving, theatre, the arts and the ability to memorize entire plays and how to play the clavichord – all of which would come handy when entertaining the restless and easily bored king years later.

At 19, the beautiful Jeanne-Antoinette entered into a marriage of convenience with de Tourenhem’s nephew Charles-Guillaume Le Normant d’Etiolles. It was Tournehem who initiated the match and the large financial incentives that came with it.

Tourenhem made his nephew his sole heir and gave the couple the estate at Etoilles, south of Paris, which was situated on the edge of the royal hunting ground of the forest of Senart, something that would also prove useful in Jeanne Antoinette’s pursuit of the king.

Le Normant d’Etiolles was in love with his wife and would later have a hard time with her being the mistress of the king, despite the benefits that came with the title. The couple had two children who both died early.

Soon, Jeanne Antoinette created her own salon at Etiolles which was attended by the cultural elite, including Voltaire, the Cardinal de Bernis, Montesquieu. Thanks to these circles and gatherings, she learned the fine art of conversation, courtly decorum and sharpened her wit for which she would later become known at the court of Versailles.

Thanks to her growing popularity in Paris salons, King Louis XV heard rumors of her intelligence, talents and beauty long before the couple first met.

Jeanne Antoinette was determined to catch the eye of the king and used his hunt in the forest of Senart to do so. Because she lived in an estate near the forest, she was permitted to follow the royal party at a distance. Wanting to attract the king’s notice, she drove directly in front his path, each time in a different colored outfit. The trick worked as the king sent a gift of venison to her.

The king’s current mistress Madame de Chateauroux was one of the main obstacles blocking Jeanne Antoinette from becoming too close with Louis XV. This all ended when Chateauroux, formerly known as Marie Anne de Mailly-Nesle, youngest of the five famous de Nesle sisters, four of whom became mistresses of the king, died on December 1744. The road was clear.

In February 1745, Jeanne Antoinette received a formal invitation to attend the masked ball at the Palace of Versailles. The ball was held to celebrate the wedding of the Dauphin Louis de France to Maria Teresa of Spain. 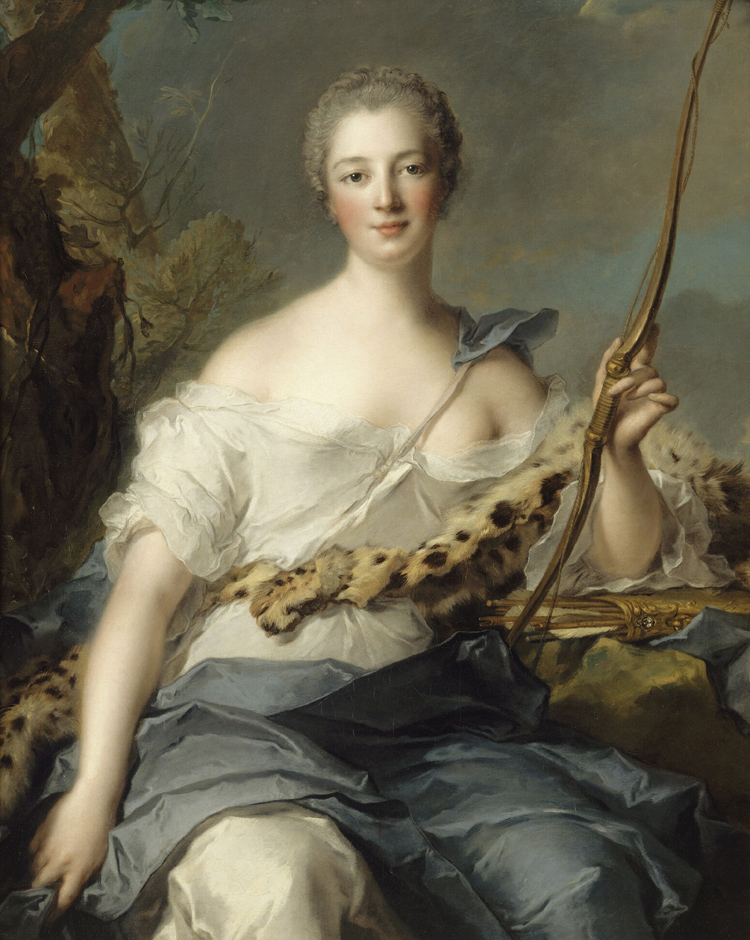 Less than a month later, Jeanne Antoinette became the king’s mistress and was installed at the palace in an apartment directly above his, connected by a secret staircase.

Louis XIV great-grandson became the King of France at the age of five. He was known for his sexual voracity – he reportedly had more than 100 mistresses – and unflattering melancholy. He was married to Queen Marie Leszczynska, daughter of King Stanislaw of Poland.

Apparently, the queen appreciated the respect and loyalty shown to her by Jeanne-Antoinette, and openly acknowledged the efforts she exerted to amuse the king.

By now, the official separation between her and her husband was pronounced. Her husband was deeply upset by her becoming the king’s mistress and refused a prestigious position as the French ambassador to Turkey offered by the king. Funny enough, her guardian de Tourneheim was fully supportive of her new role.

Despite her residence in Versailles, Pompadour was given a formal entry at the court in the autumn of 1745 when she was introduced by the Princess de Conti, Louis XV cousin.

Pompadour’s position as favorite brought her power and influence. She later became the duchess and lady-in-waiting to the queenwhich was the noblest rank possible for a woman at court.

Pompadour became highly important to the king due to her being the only one able to tell him the truth no matter what. She was also the only one able to help Louis through his depressive moods and melancholy by putting on private productions at Versailles where she performed as the female lead, setting up hunts and grand dinner parties… She would also dress up as a peasant to amuse Louis and had portraits of herself painted to remind the king of her beauty.

The King was so enchanted by her that he reportedly commissioned the “marquise cut” diamond to be shaped after his mistress’s sensuous lips and commissioned his court jewelers to create an item set with diamonds as a present. This diamond cut is also known as the “navette.”

Beautiful and smart Madame de Pompadour became a trendsetter. She made popular the pom-poms which she wore arranged in rows across the front and top of the head. 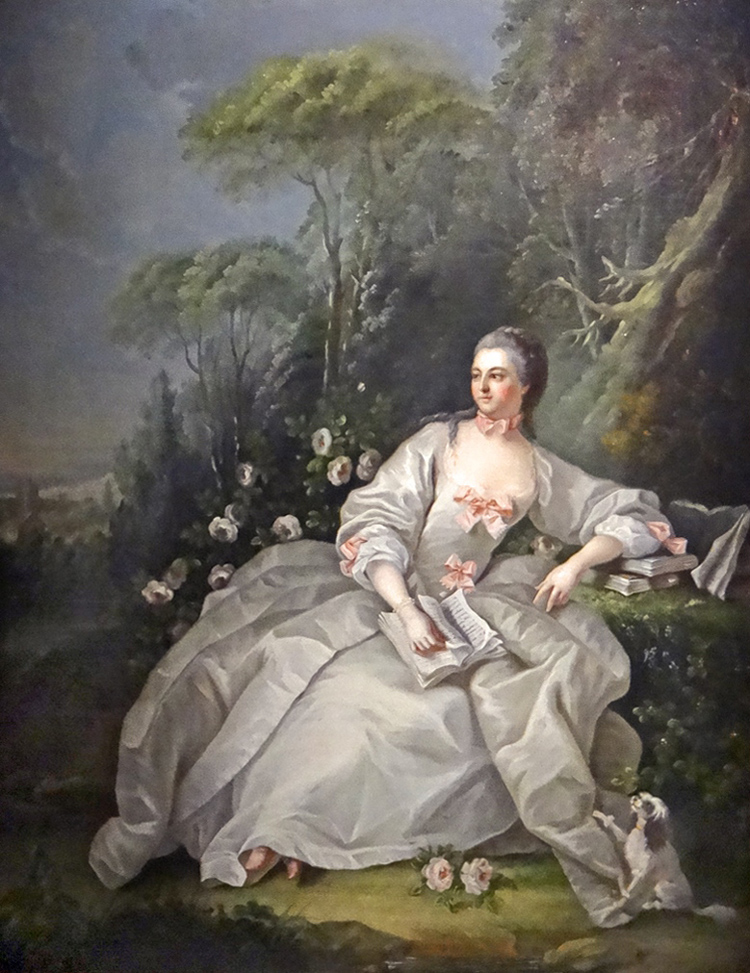 One of the most long-lasting aspects of Pompadour’s legacy is the hairstyle which was named after her, with the hair swept upwards from the face and worn high over the forehead. The style endured centuries after her deaths and was revived in the turn of the 20th century and the 1950s with the rock and roll look.

There is also a long-standing legend that the shape of the French champagne glass, known as the coupe, was originally modeled after the size and shape of Pompadour’s breast.

As an accomplished woman Madame de Pompadour had a good eye for interior design and influenced the “Rococo” style in fine and decorative arts. She helped set up Sevres, which became one of the most famous porcelain manufacturers in Europe, that still exists today.

Madame de Pompadour was also an artist herself – an acclaimed stage actress in plays staged at her private theaters at Versailles and Bellevue, an amateur printmaker who made print engravings with the help of the artist Francois Boucher.

Pompadour was also a student of the engraver of gemstones Jacques Guay and she collected influential books and printed them with her printing press.

She also played a key role in making Paris the capital of taste and culture. She was a passionate patron of arts, sciences and literature. She protected the Physiocrates, a group of French Enlightenment economists, who believed that the wealth of nations was derived solely from the value of agriculture. Their theories paved the way for Adam Smith, the father of modern economics.

As Voltaire’s friend, Madame de Pompadour supported the development of Denis Diderot’s Encyclopedie. She managed to convince Louis XV to lift the ban he had imposed by disagreeing with him and remarking that they could settle their argument by looking it up in the Encyclopedia.

As king’s aide, confidante and favorite, Madame de Pompadour’s influence and importance was such that she was approached by an Austrian diplomat Wenzel Anton Graf Kaunitz to intervene in the negotiations which led to the Treaty of Versailles and marked the beginning of the Diplomatic Revolution during which France allied with former foe Austria.

This led to the Seven Year’s War with France, Austria and Russia pitted against Britain and Prussia. Pompadour’s enemies blamed her for France’s defeat in the war (after the defeat in the Battle of Rossbach, she comforted the king with the famous “after us, the Deluge” line) and thus allowing Britain to become the leading colonial power.

This is a historically questionable fact as Pompadour supported many ministers who implemented reforms to France’s infrastructure, taxes and trade making it “the richest nation in the world” and her role in making Paris the culture capital of Europe is undeniable.

The fact that she was a friend and confidant of the king gave Madame de Pompadour huge influence at court. She became the only person whom Louis trusted, the only one who could amuse him and captivate him.

Due to the combination of her fragile health (she suffered the aftereffects of whooping cough, recurring colds and bronchitis, spitting blood, headaches, three miscarriages to the king, as well as an unconfirmed case of leucorrhoea) and Louis’ roving eye, her sexual relationship with the king ended when she was only 29. 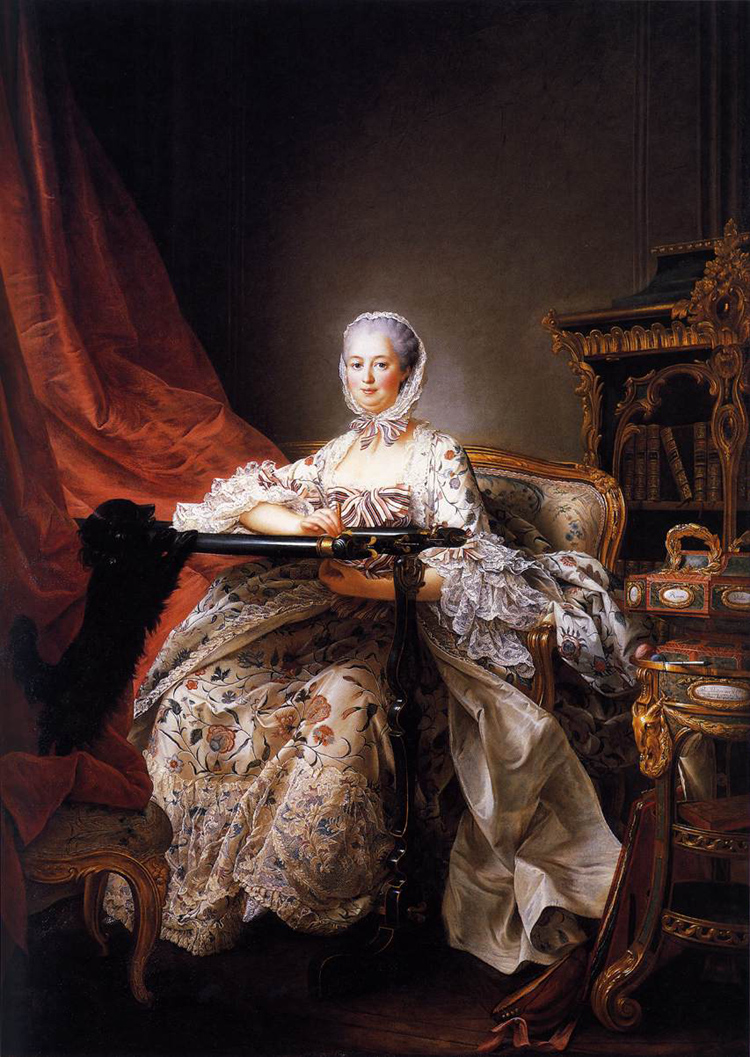 Pompadour took the role of “friend of the king” and announced it through artistic patronage, most prominently through her commission from Jean Baptiste Pigalle, of a sculpture representing herself as Amitie (friendship), offering herself to a now lost pendant sculpture of Louis XV.

Contrary to rumors fueled by her enemies, Pompadour did not employ replacement lovers for the king. After they stopped being lovers, the king met with women in a house in Versailles established just for that purpose and called Stag Park (Parc-aux-Cerfs). Pompadour knew of the women who occupied the house (which was not a harem as often described but it housed one woman at a time) and accepted it as a necessity and a favorable alternative to a rival at court.

“It is his heart I want! All these little girls with no education will not take it from me. I would not be so calm if I saw some pretty woman of the court or the capital trying to conquer it,” she said.

She had his heart until the very end. She contracted tuberculosis and died in 1764 at the age of 42. The King nursed her through her illness. Looking at the rain during the funeral, Louis XV reportedly said: The marquise won’t have good weather for her journey.

Jeanne-Antoinette Poisson, Madame de Pompadour, was laid to rest at the Couvent des Capucines in Paris.