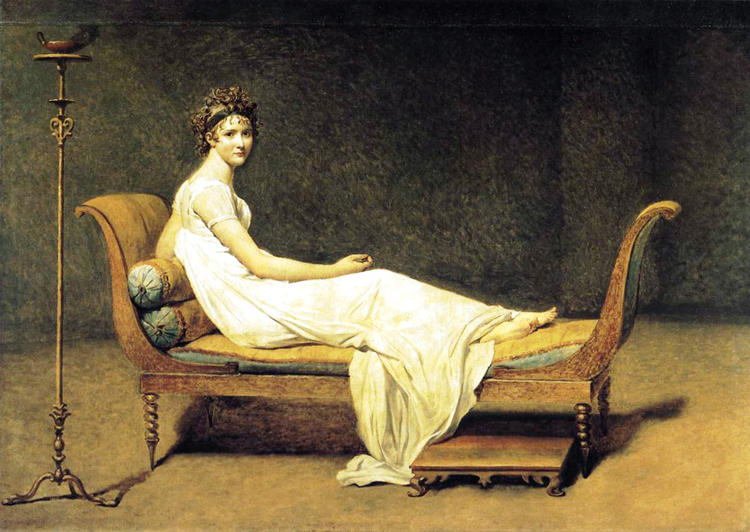 She was a neoclassical goddess of Paris fashion, socialite and an influential salon hostess. A trendsetter. Her name was Juliette Recamier.

Jeanne Francoise Jullie Adelaide Recamier was born in 1777 in Lyon. She was the only child of Jean Bernard, the King’s counselor and notary and his wife Julie Matton.  When her father became the receiver of finance, the family moved from Lyon to Paris.

Juliette (a diminutive of Jullie) was described as “tender-hearted, affectionate, charitable and kind, beloved in her home-circle and by all who know her.” She was also beautiful, accomplished and loved literature – a feature she will later use when hosting her famous salon.

At the age of fifteen, she married Jacques-Rose Recamier, a banker nearly thirty years her senior. Reportedly, the marriage was never consummated and Juliette remained a virgin until at least age forty.

There are several explanations for the lack of consummation. One may be explained by what Recamier wrote to his friend of his impending marriage to Juliette: “I am not in love with her, but I feel for her a genuine and tender attachment which convinces me that this interesting creature will be a partner who will ensure the happiness of my whole life and, judging by my own desire to ensure her happiness, of which I can see she is absolutely convinced, I have no doubt that the benefit will be reciprocal …. She possesses germs of virtue and principle such as are seldom seen so highly developed at so early an age; she is tender-hearted, affectionate, charitable and kind, beloved in her home-circle and by all who know her.”

The other reason for no consummation was an unproven theory, a rumor that many biographers gave credit to – that Juliette’s husband was, in fact, her mother’s lover and her biological father. A British writer and salon hostess Mary Elizabeth Mohl said that their “marriage was the only way to assure the transmission of his fortune to Juliette” as they married at the height of the revolutionary terror.

There is also a third reason why Juliette’s marriage was presumably not consummated. A well-known French writer and historian Prosper Merimee claimed that Juliette suffered from a physical condition that caused sex to be painful. Something similar remarked a French doctor and a writer Augustin Cabanes who believed Juliette, like Queen Elizabeth I, had some sort of impenetrable membrane or vaginal band that prohibited or made sex extremely difficult and unpleasant.

For the first years of their marriage, the couple lived quietly although Jacques-Rose, whose wealth made him an excelent candidate for beheading regularly of the French Revolution, regularly attended beheadings. Later, when asked why he visited the guillotine, he said: “I expected each day to share the same fate, and I went that I might prepare myself for it.”

At the same time, beautiful and accomplished Juliette, although young and shy and modest, hosted her salon where like-minded individuals gathered and discussed different topics. Her salon was one of the most fashionable salons where members of Parisian society gathered to discuss literature and politics. Among the many famous people who visited her salon was British statesman Charles James Fox who thought so highly of her he commented that “she was the only woman in France who united the attractions of pleasure to those of modesty.”

Juliette was the “Queen of Paris” and her salon was frequented by many former royalists including generals Jean Bernadotte and Jean-Victor Moureau. That together with Juliette’s later refusal to be a lady in waiting to Empress Josephine Bonaparte brought her under suspicion and into Napoleon’s “bad books”.

Along with Josephine Bonaparte, Juliette was the champion of a new fashion style known as the Empire style. Following the French Revolution, Napoleon Bonaparte was determined to completely change France’s social structure and the extravagant styles of Baroque and Rococo favored by the old regime were banished and the new establishment turned to their political ideal, the Roman republic.

Martinique-born Josephine favored and championed the new style of women’s dresses – simple and loose, reminiscent of a classical Greek or Roman statues as well as Madame Recamier.

Both Empress Josephine and the socialite Madame Recamier incorporated the new standards into every aspect of their personal attire and, with their powerful influence, reinvigorated the French textile industry.

The two ditched their corsets and adopted sleeveless, transparent tunics inspired by Greco-Roman antiquity that was all the rage after the mid-18th-century excavations at Pompeii and Herculaneum.

Juliette and Josephine wore revealing dresses without waists except for a belt worn high under the breasts and extremely decolleted. The two also wore their hair in styles reminiscent of the classical period – short, tousled and close to the head. Also, Greco-Roman sandals fastened with ribbons and worn onto naked feet were in fashion, as well as anklets and toe rings.

Jacques-Louis David’s portrait of Juliette Recamier, in the pose of contemporary goddesses, reclining on a couch and loosely dressed in a Grecian gown set a classical fashion trend. Dressed in a cloud of white mousseline and adorned with pearls, never diamonds, Juliette “walked like a goddess on the clouds and her voice thrilled the senses.” She appealed to romantic sensibility wearing crowns of real pansies and cornflowers on her head and posies on her gown.

Influenced and spellbound by her, David and his art students persuaded their female friends to wear gowns imitating antique draperies a la Recamier. The term “Recamier” is now used to denote an upholstered chaise longue similar to the backless settee Madame Recamier reclines on in David’s portrait.

The house Juliette held her salons was also furnished in the Greek style, filled with flowers. She would often invite guests to see her bedroom and her bed, which was declared the most beautiful in Paris, raised on a dais against its background of mirrored walls and draped in transparent gauze, surrounded by vases and candelabra, and an artificial rose tree.

At the time, Juliette met famous Madame de Stael, a French woman of letters of Swiss origin, and the two became close friends. Through Madame de Stael, Juliette also met the French mathematician Camille Jordan, French lawyer, politician, and historian Pierre-Edouard Lemontey, and Lucien Bonaparte, Napoleon Bonaparte‘s younger brother who immediately fell in love with her and wrote her passionate love-letters which he signed as Romeo.

Other than Napoleon’s little and scandalous brother, Juliette had many admirers. Although she acted indifferently and pitied them, her contemporaries say she was not cold or heartless but charming and magical and when she befriended someone, they remained friends for life.

When her friend Madame de Stael was exiled in 1803, Juliette began to oppose Napoleon more openly which resulted in Napoleon ordering her salon to be closed.  In 1805 Juliette’s husband suffered extensive financial losses and Napoleon exiled Juliette from Paris.

After a short stay in Lyon, she went to visit Madame de Stael who was now living in Switzerland. There, Juliette met the Prince Augustus of Prussia and the two fell madly in love.

Princ wanted to marry her and although she was seriously considering it and her husband was willing to let her go, she decided to stay with her husband who took care of her and who was now poor and old and needed her. She made the Prince a friend and ended their relationship.

When Madame de Stael died in 1817, Juliette met François-Rene de Chateaubriand, French writer, politician, diplomat and historian who founded Romanticism in French literature. Many believe that Chateaubriand was Juliette’s greatest love. Even if that is not true, he was the first in her affections and attentions much to the dismay of her many other admirers. Juliette returned from her exile to Paris in 1819 and retired at the Abbaye-aux-Bois where her salon once again became the center of Paris. She and Chateaubriand began their relationship and he was a constant visitor of her salon and in a way master of the house.

Juliette’s husband Jacques-Rose died in 1830. Under extreme pressure from his family, Chateaubriand married a young aristocrat who died in 1847. With both of them widowed, Chateaubriand who could now barely walk proposed.

Juliette,  growing old, blind and in reduced circumstances, temporarily considered marrying him but having suffered much from his imperious temper decided against it.  Some say that despite the intense emptional relationship with Chateaubriand and many admirers, Juliette’s only had genuine affection for the baron de Barante, a French statesman and historian.

Chateaubriand died in 1848 and Juliette followed in 1849. She died of cholera at the age of 71 and was buried in the village Montmartre, north of Paris, in the cemetery known as Cimetière de Montmartre.

“Whatever may be said of her, the fact remains that she not only won the affection but also retained the respect of the foremost men and master-minds of her time: that during her long life she continued to add famous names to the number of her intimate friends; that without any pretensions to literary ability, she made herself one of the most prominent figures in the literary world of the early nineteenth century, and is more famous today, merely on account of her friends, than are some of those friends who have perhaps greater claims to fame,” literary critic, Charles Augustin Sainte-Beuve, wrote in tribute to Juliette Recamier.