Marie de Medici became the Queen of France as the second wife of King Henry IV and after his assassination, she acted as a regent for her son, King Louis XIII.

Marie de Medici (born Maria in 1573) was the daughter of Francesco I de Medici, Grand Duke of Tuscany and Archduchess Joanna of Austria. Through her mother, she was a Habsburg and through her father, a member of the mighty Medici house.

The portrait of her as a young girl shows a woman with regular features and a high forehead. She had honey-brown eyes, fair skin, and light brown hair. On the portrait, we can also see a ruffled high collar she will later, in a more sophisticated and extravagant form, introduce to the French court.

Marie married King Henry IV after he annulled his marriage to Margaret of Valois, a wayward daughter of Catherine de Medici and King Henry II of France. The wedding ceremony with hundreds of guests and lavish entertainment, including the newly invented musical genre – opera, was organized in Florence, but by proxy as the King wasn’t present.  Nine months later, Marie gave birth to the future King Louis XIII in Fontainebleau.

The marriage was not a happy one. Henry’s previous marriage to Margaret was childless and difficult due to the religious-civil war it tried to stop. Henry was older than Marie and had a long succession of mistresses. He was even considering marrying his mistress Gabrielle d’Estrees who bore him a son Cesar who was legitimized. However, Margaret’s objections, d’Estrees’ death as well as the large dowry Marie was bringing and the debt Henry owned to her father, all led to the couple marrying.

Marie’s money was used to finance wars, Henry IV’s debts and build palaces and she did her duty, providing an heir to the throne, but the French never really accepted her, which led to her being portrayed as a “bad guy”, especially by Honore de Balzac and Alexandre Dumas.

It is said that Marie feuded with Henry’s mistresses in a language that shocked the court. She particularly had a beef with her husband’s leading mistress at the time, Catherine Henriette de Balzac d’Entragues. After the death of his former official mistress Gabrielle d’Estrees, Henry promised Catherine he would marry her. When he married Marie instead, constant quarrels, bickering and intrigues followed with Catherine calling Marie “the fat banker’s daughter.”

In a way, Henry IV treated Marie the same way Henry II treated Catherine de Medici – for breeding purposes only. Instead of banishing their mistresses, both men neglected their wives and treated the mistresses like royalty.  This led to Marie supporting and showing great sympathy to Henry’s troubled ex-wife Marguerite de Valois.

Marie was crowned Queen of France in May 1610. One day later, Henry IV was killed by a Catholic fanatic. Henry’s coach was stopped by a traffic jam in Rue de la Ferronneire, due to the Queen’s coronation, and Henry was stabbed to death in it.

Marie became the regent hours after the assassination and immediately banished Henry’s mistress Catherine from the court. 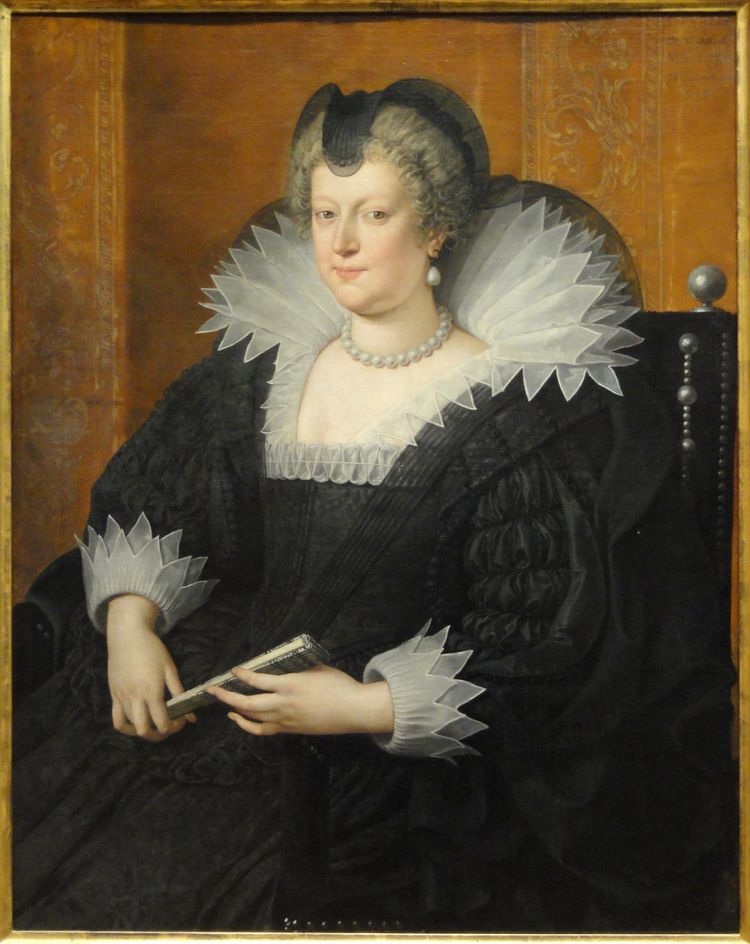 Uninterested and inexperienced in politics, Marie was extremely stubborn and wasn’t lacking ambition although some say she was lacking a better judgment since she relied on her maid and childhood friend Leonora Galigai and her unscrupulous husband Concino Concini to rule.

Concini used Marie to become a Marshal of France even though he never fought a battle and influenced her to dismiss Henry’s able minister the Duke of Sully and open doors for a larger influence of the Roman Catholic Church. Half Habsburg herself, Marie abandoned traditional anti-Habsburg French foreign policy and arranged the marriage between her daughter Elisabeth and the future King Philip IV of Spain.

The weakness of royal authority and the fact that they had Italian outsider on the court and at the royal council, led to the rebellion of princes and prominent nobles of the kingdom which Marie tried to pacify by buying them off, draining the treasury in vain.  She also tried to strengthen her rule by adding Armand Jean du Plessis, later known as Cardinal Richelieu to her councils.

During her reign, Marie undertook several large art projects, including building and furnishing of the Palais du Luxembourg, she called “Palais Medicis”.  Flemish master Peter Paul Rubens, whom Marie met around the time of her wedding, was commissioned to create paintings glorifying her life and reign and this series of 21 paintings along with portraits of Marie and her family is now known as the Marie de Medici cycle and hangs in the Louvre.

The task of painting Marie’s life and triumphs was a difficult one since Rubens had to create 21 paintings about a woman whose life consisted of marriage, giving birth to six children, one of which died in infancy and political scandals that made any literal description of the events too controversial to execute without angering someone in government.

Rubens, already established as an exceptional painter, turned to classical literature and artistic traditions and used allegorical representations to glorify the queen’s achievements and sensitively illustrate the less favorable events in Marie’s life. He painted extravagant images of the Queen Mother surrounded by ancient goods. 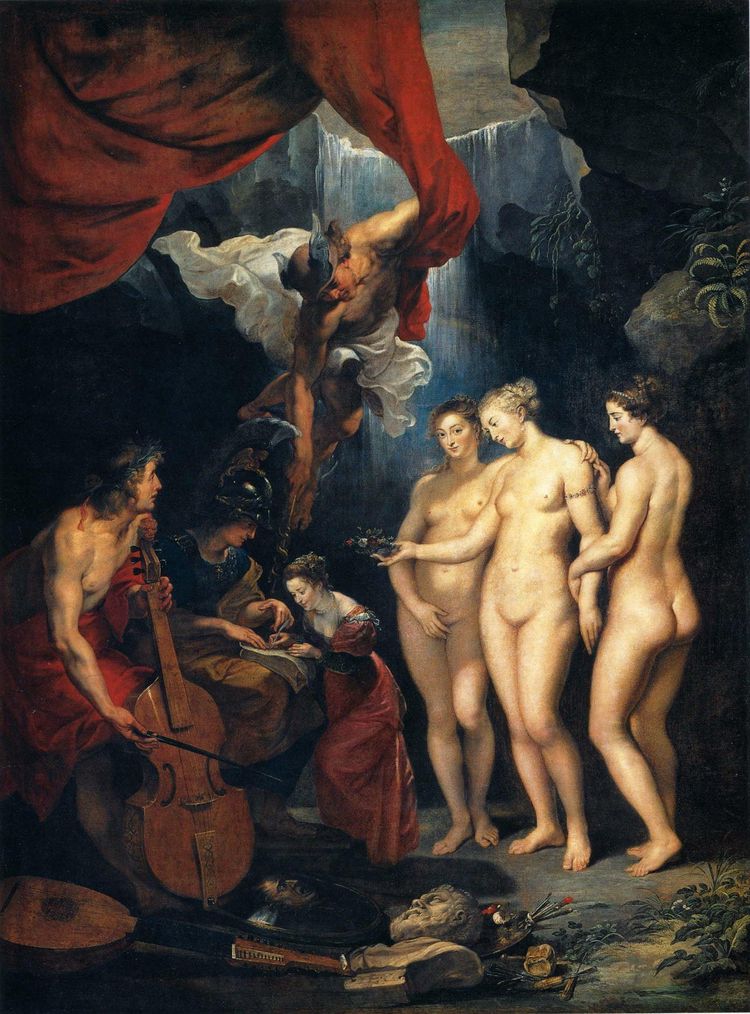 Rubens was also commissioned to paint a corresponding gallery illustrating the life of Henry IV, but that cycle was never completed. Rubens began working at it after he completed the Marie de Medici cycle but stopped when Marie de Medici was banished from Paris and Cardinal Richelieu gained power over Louis XIII.

The collection Marie de Medici left behind had a lasting impact on French painting by introducing the work of Rubens and contemporary Italian painters to Paris.

As a woman of financial means, Marie also financed several expeditions during her reign, including Samuel de Champlain’s to North America which led to France laying claim to Canada.

Temperamental and frivolous, Marie loved splendid, magnificent fashion.  She adopted the corsets, introduced by Catherine de Medici’s “flying squadron” of sexy spies but discarded the hoops, introducing short waists laced extremely tight, long trailing skirts and very high-heeled shoes. And the low, low necklines! It is said that young Louis was so alarmed and astonished at the sight of the white shoulders of the ladies of high position that threw a glass of wine over them.

This led to the introduction of a fashion accessory known as the Medici collar, a “standing, lace-edged ruff worn high in the back and ending in a low décolletage,” as defined by experts.

The collar provided a large, decorative frame around the woman’s head and was worn with a low neck gown that revealed a woman’s cleavage.

The collar was supported by wire or heavy starch and was made out of lace, embroidered satin or other light materials that could tower over the shoulders and head of the wearer. Marie de Medici imported from Tuscany the costliest laces, completely disregarding the laws restricting dealing with Italy.

Her portraits by Rubens, Pourbus de Younger, and others, depict her wearing the elaborate Venetian point, but also how the collar style changed over the years, from the ruff first worn by Catherine de Medici to the wide flat collar worn by Louis XIII. 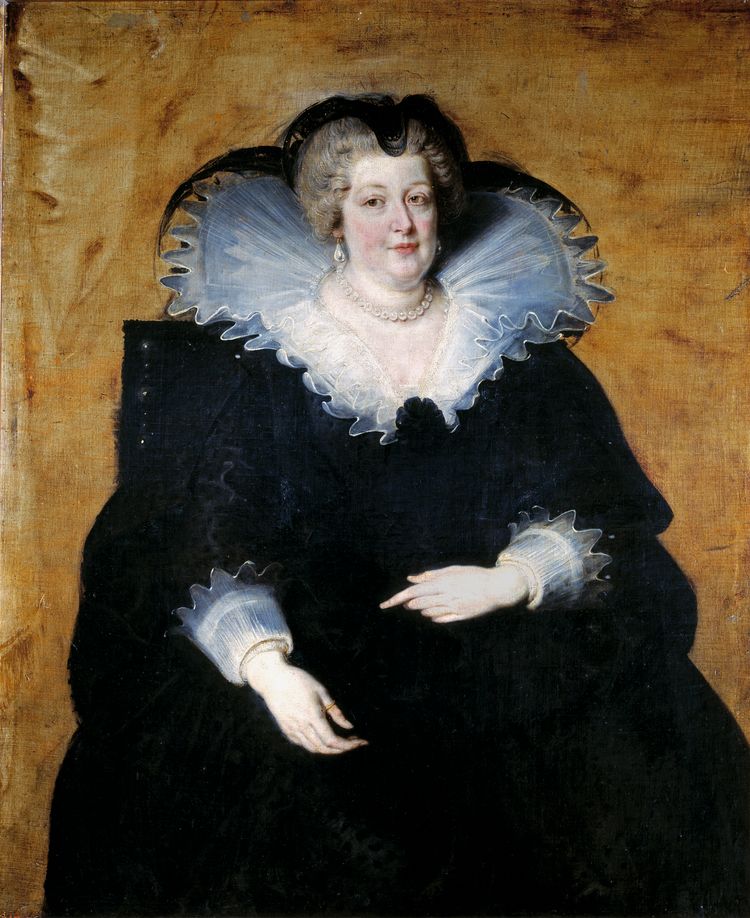 Louis XIII, who at the time was already several years into his legal majority, rebelled against the queen, took over the reins in 1617 and overturned his mother’s pro-Habsburg, pro-Spanish policy. He ordered the assassination of the Concinis, exiled the queen to the Chateau de Blois and appointed Richelieu a cardinal.

Thus began some 15 years of feuding between Marie and her son, which added to the instability of Louis XIII early reign.

Marie managed to escape imprisonment “in the wilderness” as she put it and joined the revolt against the king, led by her son and Louis’s brother Gaston, Duke of Orleans. Duke’s forces were easily dispersed by the king and Richelieu managed to mediate reconciliation between the king and his mother who was allowed to hold a small court at Angers.

Following the death of his favorite, the Duke of Luynes, the king turned for guidance to Richelieu who was initially allied to the queen, but quickly became the king’s loyal servant. Once again aided by Gaston, Marie conspired against Richelieu, hoping to depose him as chief minister. She nearly did it in November 1630 in the so-called Day of Dupes.

In the Luxembourg Palace Marie confronted Richelieu in front of the king and demanded the cardinal’s dismissal, asking the king to choose between her and Richelieu. No immediate decision came from this confrontation and the king retired to his hunting lodge in Versailles leaving Richelieu convinced his political career was over. But the cardinal had influential friends… Marie was led to believe that the king will dismiss Richelieu but then, in a dramatic turnaround, he backed his chief minister and arrested Marie.

She exiled herself to Compiegne in northern France from where she sought refuge in the Low Countries (Brussels and Amsterdam).

Marie’s visit to Amsterdam was seen by the Dutch as a political success as it lent official recognition to the newly formed Dutch Republic. She was given a royal treatment with spectacular displays and water pageants in the city’s harbor.

From there, she traveled to England where her youngest was the queen and Cologne where she died in 1642.  Although her political power was diminished, she continued to be a rallying point for Richelieu’s opponents.

Her death was quickly followed by Richelieu just a few months later, and then in May 1643, her son Luis XIII died as well.